Replacing the engine in a vehicle is one of the most challenging jobs for a mechanic. Since most mechanics charge by the hour for their labor, the time involved in replacing an engine is a key factor. We've researched the average time needed for an engine replacement, so you know what to expect.

For most models, replacing a simple gas or diesel engine in a car typically takes 5-6 hours. That's when done by an experienced mechanic who uses the right tools. Hybrid and electric cars can take longer, depending on the elements that are being replaced. With trucks and other larger vehicles, expect engine replacement to take 8-9 hours.

There are many variables to consider, such as the vehicle's age, number of components, and the engine's accessibility. A complex engine replacement may take 15-hours or longer even for a skilled mechanic, whereas a straightforward replacement can be completed in under 5 hours.

Let’s go over some of the main factors that will help you determine whether you’re looking at a lengthy replacement. Keep reading as we delve into how to know when your engine needs replaced and whether you should rebuild instead. Finally, we'll cover the potential to swap an engine and how involved is the time required for this project. 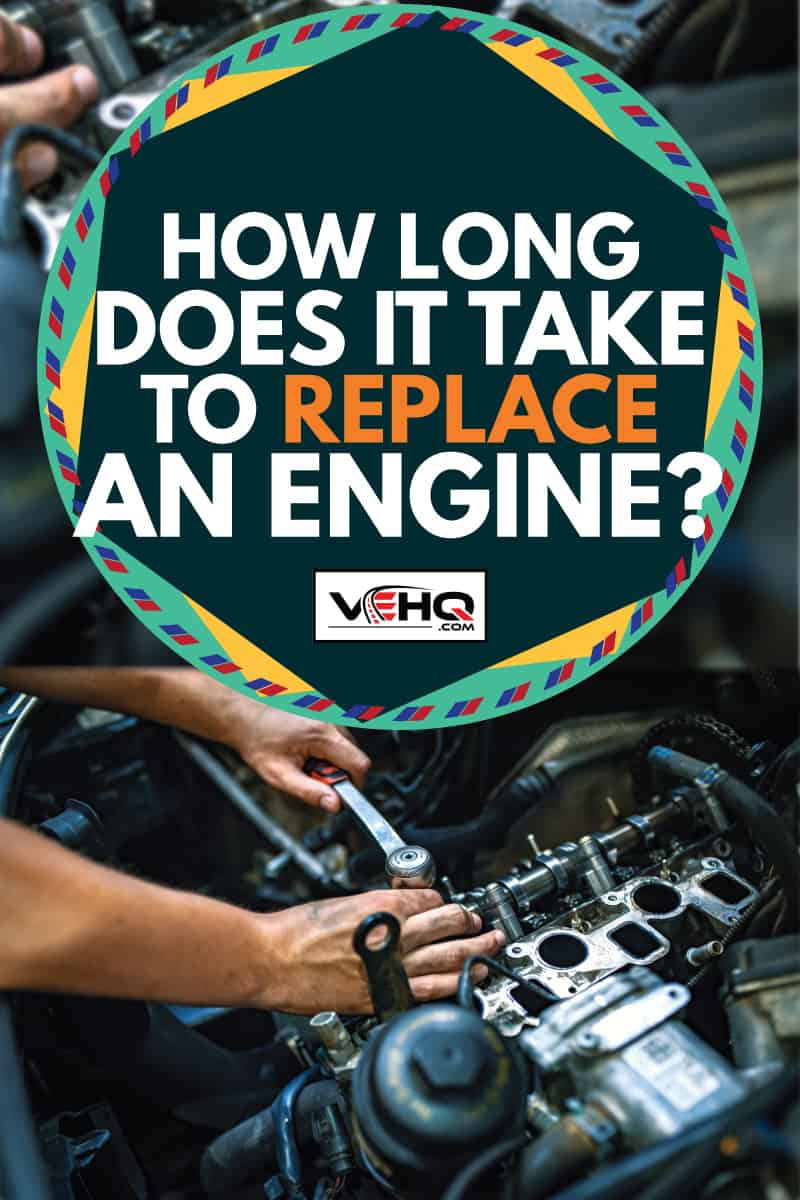 Factors that can impact how long an engine swap takes

As you can see from our answer above, the real answer to how long it takes to replace a car engine is: It depends. There are many factors at play here.

Expertise level & having the right tools

Clearly, swapping an engine takes some expertise. If you don't know much about car mechanics, this isn't the right project to start with. For this article, we assume that the person making the swap is, in fact, a qualified and experienced mechanic.

Even an experienced professional would need the right tools. Chief of which would be the crane that lifts the old engine outs and then lifts and places the vehicle's new engine. You can read our article here about how much an engine typically weighs, but we can tell you right away that even a small gasoline engine weighs 300 lbs or more. Diesel engines are much heavier. Either way, you can't just lift a car engine with your bare hands.

You would need an engine crane such as this one -

That's in addition to a good set of tools for putting some engine parts apart and then putting them back together.

Older vehicles tend to take less time for repairs, including an engine replacement because they have more space for the mechanic to work and simpler parts and connections.  There were very few technical components available on vehicles in the 1970s compared to the 2000s, and the engine compartments were designed with the mechanic in mind. However, if the older vehicle has a lot of rust or has not been properly maintained, this can significantly increase the amount of time needed for repairs.

The more bells and whistles a vehicle has, the more time it potentially takes to replace the engine. It is not a matter of simply disconnecting and reconnecting wires in the proper order.  Each component adds several steps to the process and will need to be thoroughly tested, adjusted, and re-tested.

A significant factor in engine replacement is the ease of access to the engine and its connections without removing additional parts. In some vehicles, such as minivans, there are more obstacles and less space, requiring extra steps and increasing the time to remove and install an engine. Whether the vehicle is large or small, a passenger car, truck, or RV, determines the space allotted for the mechanic to work. Tight spaces can drastically affect the time, and the cost, required to remove and replace an engine. Modern passenger vehicles are focused on the driver's and passengers' safety and comfort and often include advanced components and technology with limited space for a mechanic to work.

Gasoline and diesel engines are relatively easier to swap compared to the newer electric and hybrid engines. With the latter, you may need to see exactly which parts of the engine are replaced before figuring out how long it would take.

Finally, the type of vehicle, and more specifically, its size, come into play as well. Swapping the engine of a pickup truck will likely take longer than replacing the engine of a sedan. How much longer? Some experts estimate that at 2 hours longer. Although, again, the specific setup matters too.

If you need your engine replaced, shop around and ask about prices. The price quotes can vary, but you'll be able to get specific ones for your vehicle. Keep in mind that these businesses will likely give you a high-end estimate on labor time, just to make sure that any additional time over unforeseen complications is covered.

You are likely to be charged around $60-$70 an hour for labor. There's also the cost of the new engine to factor in. Your overall price tag will reflect the type of engine you chose to install and whether that engine is new or used. Expect to pay anything between $1,000 to $8,000 for a car engine swap, depending on your model and replacement engine choice.

There is a lot involved in an engine replacement, and in-depth knowledge of the vehicle's parts and how they interact is essential. Before the old engine can be lifted from the vehicle, the hood is completely removed. Vehicles that have a more compact engine space may also need to have other parts removed.

Next, all fluids are drained, and the intake and exhaust must be disconnected. The radiator may also need to be removed. Wiring and components must be carefully disconnected; this is where the time variables become more pronounced. Finally, when all components have been properly disconnected, the transmission and motor mounts are disconnected. Now the old engine can be lifted from the vehicle, and the new engine put into place.

The process is then repeated in reverse to connect the new engine, with additional time for testing and adjusting each component's connection. With more components and advanced options, additional time is needed to re-connect and test.

Here's a video that shows you the first part of an Engine swap, just to give you an idea of what a relatively simple engine replacement looks like -

Should I Replace The Engine In My Vehicle?

An engine usually makes it pretty obvious when its days are over. It might blow great clouds of blue or white smoke. It could make a racket that is too loud to be ignored. If the engine has seized, it will simply not start. Some of the more common issues that call for engine replacement are piston failure, cracked or warped heads, or damaged rods and bearings.

If the engine regularly overheats, coolant leaks from the engine or white, steamy smoke comes from the exhaust pipe, and chances are the engine block is damaged.

Rattling or thumping noises on acceleration, especially if it gets louder and louder, indicate damage to the rods or bearings. Check the oil for bits of metal and check the oil pressure. If the oil pressure is continually low or there is metal in the oil, it is most likely an issue with rods or bearings. It may be quite dangerous to continue driving a vehicle with these signs as a rod could be thrown and go right through the engine casing.

A less obvious issue requiring engine replacement is a bad piston or cylinder. This may be the cause when an engine runs unevenly and lacks power, makes a loud rattling sound on deceleration, has blue smoke coming from the exhaust, or has caps, valves, or hoses that continually pop off.

Expense is usually a major factor in the decision to replace an engine. If all else is in good condition, a new engine could extend the vehicle's life and save money in the long run. However, if there are additional concerns such as suspension or transmission, it may be time to look for another vehicle.

Is It Cheaper To Replace Or Rebuild An Engine?

While it is generally less expensive to rebuild an engine than to buy a new one, this option takes much longer than replacement.  A rebuilt engine must be taken apart, piece by piece, and all items repaired, replaced, or cleaned up and polished. An in-depth conversation with the mechanic is the only way to know exactly what they plan to rebuild, replace, or leave as is. The more thorough the rebuild, the more time it will take -increasing the cost of labor.

Be sure and talk to several mechanics before making your choice. You may wonder how the mechanic arrives at an estimate. Manufacturers print a book for each vehicle they produce that gives approximate time frames for most repairs, including engine replacement. When a mechanic gives you a time frame, it is probably coming from this book. So it’s important to understand the variables which may cause the job to take longer.

Is It Hard To Swap An Engine?

There are times when an engine is replaced even though it has no major issues. These swaps can be difficult and time-consuming. Everything must be measured carefully, and significant attention to detail is required. Aside from the obvious step of ensuring the engine will fit into the space provided, all connections must be possible and existing components must interact with the new engine.

Now you are equipped with the information needed to have a meaningful conversation with a mechanic about engine replacement and the amount of time it might take. Be sure to provide the make, model, and year of the vehicle and details about special components. An experienced mechanic should be able to provide you with a fairly accurate time frame. Don’t forget to ask for details about warranties, should this still apply to your vehicle.

Before you pursue an engine replacement, check out our related posts to get prepared: