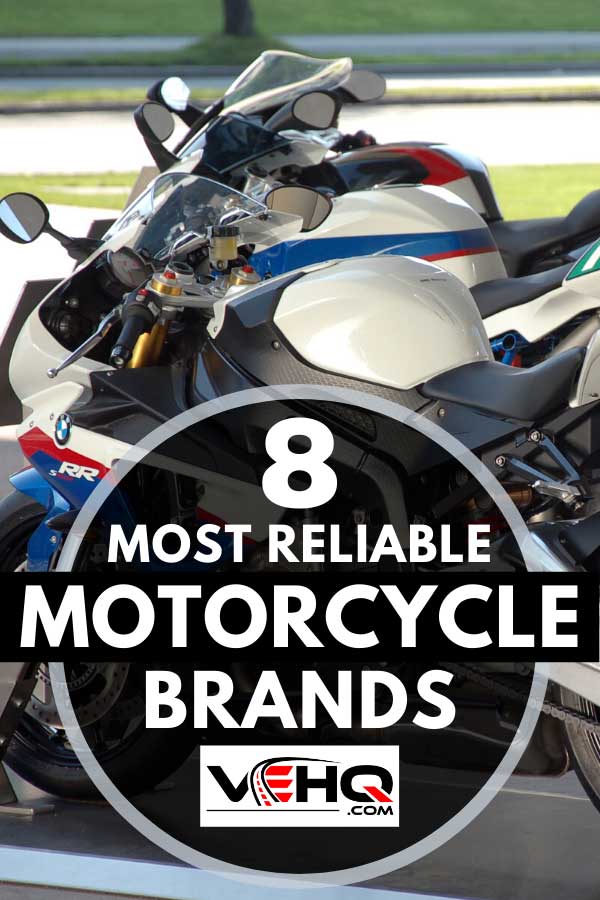 Shopping for a motorcycle is unquestionably exciting. Once you move past the buzz of power, ride, and even color, though, you'll need to consider your preferred bike's reliability while shopping. With that in mind, which motorcycle manufacturers produce the most reliable bikes?

According to Consumer Reports, some of the most reliable motorcycle brands currently on the market include:

What does reliability entail, though? More importantly, how do these brands stack up when compared to one another? Take a dive into the world of motorcycle reliability so you can head to your local shop a little more informed about your manufacturer of choice.

Whether you're purchasing your first ride or looking to replace an old one, you want a motorcycle that's going to last a long time. Which brands, then, consistently deliver motorcycles that are innovative and reliable?

Let's break down some of the biggest manufacturers and see just how their bikes stack up against one another.

Can-Am has brought a diverse selection of motorcycles and dirtbikes to the roads since 1972. When it comes to reliability, though, the company doesn't have the best track record. According to Consumer Reports, bikes manufactured by Can-Am have a 42 percent fail rate. This means that just under half of the bikes produced by Can-Am are likely to break down and need repairs within the first few years of new ownership.

That said, a less-than-stellar reliability rating shouldn't be considered damning. Can-Am motorcycles and dirt bikes still make waves on the road. It's also worth noting that, as reported by Consumer Reports, most owners who had to take their Can-Ams in for repairs were able to do so at zero personal cost.

While this does mean most of the bikes broke under warranty, it also means that Can-Am is willing to look out for its riders.

BMW has long aimed to bring luxury to the road, be it with the company's cars or with its motorcycles. While the manufacturer ranks higher in reliability than Can-Am, that luxury is making it difficult for some bikers to maintain their rides. Just about 40 percent of BMW motorcycles, according to Consumer Reports, need repairs within their first few years of new ownership.

Even so, BMW produces several motorcycles that suit road trippers and sprinters alike.

Ducati is on the up and up with its reliability reputation. While the brand used to be known for its less-than-stellar motorcycles, it now has a better reliability rating than both BMW and Can-Am.

According to Consumer Reports, 33 percent of Ducati motorcycles tend to need repairs within their first years of operation on the road. While this isn't an ideal statistic, it's a marked improvement on the manufacturer's part. It also represents a fairly significant jump from BMW's 40 percent.

Compared to Ducati, Triumph's reputation as a motorcycle manufacturer has fluctuated over the past few years. More and more often, the engines on Triumph's motorcycles are seeing damage, so much so that 29 percent of the company's bikes are predicted to need repairs within the first years of operation.

This percentage, of course, is lower than those of the manufacturers listed thus far. What will that percentage look like in years to come? Only time will tell. Despite what some long-time motorcyclists consider a drop in the company's reliability, many bikers still consider Triumph a smooth ride on the road. These bikes, it seems, are ideal for long-term riders and newbies alike.

Funnily enough, it's the motorcycles made in Japan that tend to last longer than their peers. Consider, for example, motorcycles manufactured by Kawasaki. The company began developing its motorcycles in 1949, and nowadays, they're one of the best names on the road.

Kawasaki motorcycles are already ideal for bikers who're getting started on the road. Their lower rate of failure will help new motorcyclists - and more experienced ones, too - save on repair costs. After all, the less time you spend in the repair shop, the more time you have to "let the good times roll," as says the Kawasaki Motorcycle Division's motto.

Honda produces a litany of different motorcycles, all made to cater to different riders. Combine that diversity with the company's low failure rating, and you're looking at a recipe for success.

Only 12 percent of Honda's motorcycles are said to fail within their first four years on the road. This doesn't just apply to one type of motorcycle that the manufacturer releases, either. Consumer Reports gives Honda a generous rating, stating that the aforementioned 12 percent is an average of all of the company's motorcycle failure ratings.

If you want a company to start shopping with, then, why not consider Honda? That low failure rating and sheer diversity of bikes make the manufacturer ideal for hobbyists and professionals.

Honda's not alone in its success. Another Japanese company, Suzuki, ranks well in terms of reliability. Honda and Suzuki's failure ratings, in fact, come in at a tie.

Only 12 percent of Suzuki motorcycles need repairs within their first several years of operation according to Consumer Reports. How are you supposed to choose, then, between a Suzuki bike and a Honda bike? That all comes down to personal preference - and what's a better metric to operate on than that?

Honda and Suzuki, however, aren't the best manufacturers on the market in terms of reliability. That honor goes to Yamaha and its cruiser line - Star. Consumer Reports states that Yamaha's bikes fail a mere 11 percent of the time.

Combine that exceptionally low failure rating with Yamaha's versatility on the road, and you're looking at a winning combination of safety and style.

Which Motorcycles Last The Longest?

A lower rate of failure does lend itself to a longer motorcycle lifespan. It's with that in mind that motorcycles produced by Kawasaki, Yamaha, Suzuki, and Honda are all highly-recommended to motorcyclists of all degrees of experience.

That said, the longevity of a bike depends almost entirely on its rider. While manufacturers can change the way their bikes are made to increase their lifespan, a motorcyclist who treats their bike with care is going to get more years out of their bike.

Regular maintenance, consistent rides, and low-risk treatment all go a long way in ensuring that a bike stays in the family for years - even decades - to come.

You'll notice that Harley Davidson motorcycles didn't make the aforementioned list. That isn't because they were left out of Consumer Reports' study. Nor are they unreliable motorcycles. On average, only 26 percent of Harley Davidson's American-made motorcycles fail within their first few years of operation.

However, many sources argue whether or not Harley Davidson produces a sustainable ride, both in terms of longevity and the environment. That said, these bikes are ideal for longer rides and will suit older motorcyclists well.

If you are considering purchasing a Harley, either as a replacement for a previous bike or as your first ride, be sure to keep the manufacturer's discourse in mind. You'll be able to generate your own opinion on the brand's reliability, all while keeping that 26 percent failure rate in mind.

How Long Do Motorcycle Engines Last?

The lifespan of your average motorcycle engine will vary based on its daily use. If you're an avid rider, it's possible that your engine will wear out more quickly than that of a bike that's ridden only twice a week.

On average, though, most motorcycle engines will carry you between 20,000 and 30,000 miles, so long as you carefully maintain them. 30,000 miles is a long way for a motorcycle to go, but if you have a strong working relationship with the mechanics at your local repair shop, you may be able to make it there.

That said, don't push your bike further than you think it's prepared to go. If you're spending more money on repairs than you are on gas for your favorite trips, it may be time to retire your bike and start shopping for a new one.

Consumer Reports has done a lot of heavy lifting for motorcyclists around the world. It's thanks to the outlet's input that you can more readily shop for a bike that's safe to ride. Combine a low failure rate with consistent and careful care, and you'll be able to keep the motorcycle of your choice in operation for many happy years.