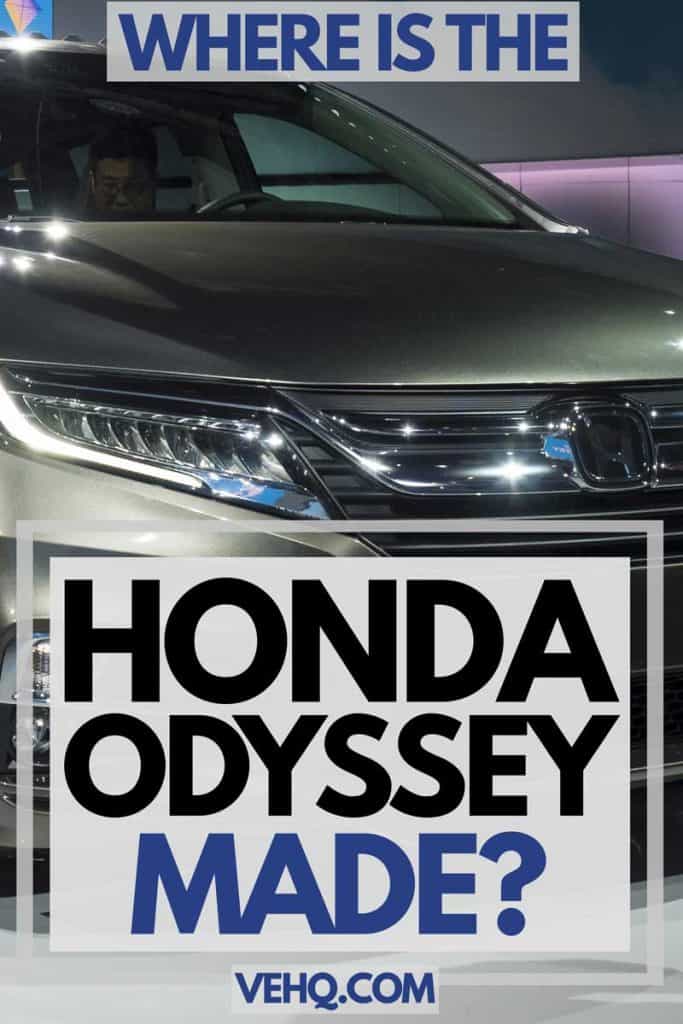 The Honda Odyssey is made in Canada. While it began its production in Japan in 1995, just a few years later Honda began producing the Odyssey at their plant in Alliston, Ontario. The Canadian plant has been open since 1988, and Honda sells some of the best-selling cars in Canada so the company feels quite at home there.

Keep reading to learn more about the Honda Odyssey, and why it's made in Canada.

There are three manufacturing plants that Honda has in Canada:

The manufacturing process at the Canadian plant starts with the stamping process. This is where the metal body of the car is shaped. What comes next is the welding process where robotic welders join pieces together. Next up is the paint job and then there is the final assembly, where the remaining work is completed.

Between the two plants, there is a new Honda being produced almost every single minute. These are two extremely efficient manufacturing plants. There are over 4,000 employees assembling these vehicles.

Where is the Honda Odyssey 2020 Made?

Honda is continuing the production of its Odyssey model at its plant in Ontario, Canada.

What was the First Year of the Honda Odyssey?

The Honda Odyssey first came on the market in 1995. At that time it was still being produced in Japan, however, minivans generally sell better in North America so production was moved.

The sliding doors that people have become so accustomed to in minivans were actually not included in the original Odyssey. The back doors opened just like the regular doors of a truck or a sedan. Shortly after the first generation of the vehicle, they changed to sliding side doors.

How Many Generations of Honda Odyssey are there?

As of 2018, the current Honda Odyssey is in its 5th generation.

This generation updated a lot of aspects of the minivan, including a nine-speed or ten-speed automatic transmission. The updated transmission improved the fuel efficiency of the car nicely. The engine did not get any larger but it produces more horsepower than the previous edition.

Some of the changes to the interior for this generation’s model are only available with some of the upgraded trims. Honda did improve the look of the exterior, making it a sleeker-looking automobile.

How Many People Can Fit in a 2020 Honda Odyssey?

The van has a maximum capacity of 8 passengers. It does become somewhat of a squeeze if you are seating 8 people, but 7 people can fit very comfortably.

Further, the middle seats are easy to maneuver. If you ever need to transfer cargo, you will be able to create a lot of space in the cabin of the van to accommodate.

How does the 2020 Honda Odyssey Compete With Other Vans?

The Odyssey is certainly competitive, but it is not a clear victor, and you will want to look into specifics to determine what features and aspects are most important to you.

For example, the Honda has larger rims that are aesthetically pleasing, but the ride is a bit rougher compared to a Toyota Sienna.

There are only three main competitors when it comes to minivans in North America: the Honda Odyssey, the Toyota Sienna, and the Chrysler Pacifica. Each company made some notable tweaks to the design and the technology of their vans. The result is three very comparable models, you will probably be satisfied with whichever one you choose.

How Much Does a 2020 Honda Odyssey Cost?

It depends on what trim you are looking for, however, the base model starts at $30,690.

There are several trims available, each of which offers a bit more luxury and additional features than the last. There is the EX model, a step up from the base, which starts at $34,690. Next is the EX-L, the middle trim, which starts at $37,960. The Touring model is a pretty big step up in price and features, starting at $44,960. Finally, there is the fully-loaded Elite model which starts at $47,320.

There was a time in North America where minivans were very popular. That time has come to an end mostly, although they still sell well enough that companies like Honda and Toyota are willing to continue production. Consumer interest has largely moved toward SUVs instead; even the popularity of sedans is declining.

With that being said, you will still frequently see Honda Odysseys on the road which is a testament to the quality of the vehicles. The model has managed to resist the deteriorating interest in minivans as much as possible. For a family on a road trip, this vehicle is one of the best options out there as it has been for decades now.

It is not easy to make a minivan look cool, it might be impossible to tell the truth, but Honda comes about as close as any company could have with this 2020 model. The aesthetic is more sleek and this is especially noted in both the grill and the doors.

The chrome accents on the front bumper by the fog lights and on the grill are a great touch. The side of the van has a little scoop running down the side, giving it a more aerodynamic and modern look that none of the previous models have ever pulled off.

The quality of the parts and the way they have been put together cannot be understated. The vehicles continue to be built up at the Canadian production plants. There is a third plant, not mentioned earlier, where some of the engines are assembled as well. These Canadian manufacturing plants are a big part of the reason for Honda’s excellent reputation when it comes to durability. It is not rare to find a Honda on the road with over 200k miles running just fine.

It is reasonable to believe that for the foreseeable future, Honda will continue to produce the Odyssey in Canada. It is possible that they could produce certain parts outside of Canada, but it probably makes the most sense for them to proceed at their current plant. Especially since they sell so many units in North America, things are a lot easier when large vans don’t need to be shipped overseas.

In a dying breed of car, the Honda Odyssey is resilient and continues to be one of the best options for a family car.