Since the production of the Kia Sportage started in 1993, there have been five generations of this compact SUV. Some of the main features of the Sportage have shifted in and out of use during those five generations. Some models only had two doors instead of four, and one edition was even a convertible. But which models have available four-wheel-drive? And do the newest Sportage models come in a 4x4 version? We researched all of the models of the Kia Sportage and have an answer for you here.

Despite five different Sportage iterations across the years, only the first generation had a four-wheel-drive option. However, every generation since then offers an all-wheel-drive option instead of the standard front-wheel-drive. The newest 2022 model of the Kia Sportage has an AWD upgrade available for all four of its trims. 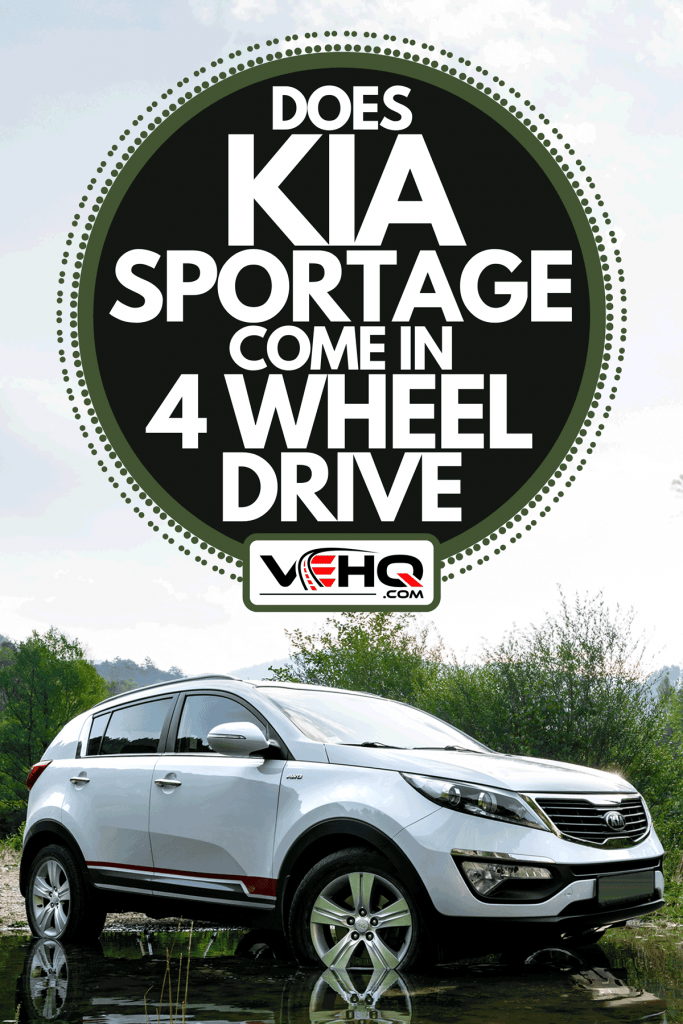 Drivetrain Options on the Kia Sportage

That first generation Sportage, released in the US market from 1995 through 2002, was the only Sportage made with a four-wheel-drive (4x4) option. Since then, Kia has instead opted to made all-wheel-drive available on the Sportage.

Each of the four generations that have followed the Gen 1 Sportage have all had an AWD version. This is always offered as an upgrade to the standard front-wheel drive. A great way to illustrate this is by looking at the new 2022 Kia Sportage.

The 2022 Kia Sportage is available in four trims: LX, Nightfall Edition, EX, and SX Turbo. According to the specs comparison page for the model year, all four trims have an AWD option. The AWD for all four is a feature that requires an upgrade from the standard FWD.

So, Kia committed to switching out the option of a 4x4 Sportage for an AWD version. But was this a good move overall? Let's look at the difference between the two types of drivetrains and how AWD helps make the Sportage special.

What's the Difference Between a 4x4 and AWD?

While the two drivetrain types of 4x4 and AWD work to accomplish the same goals, they are not the same. A 4x4, also called four-wheel-drive (4WD), is mainly used for offroad conditions at slow speeds.

With a 4WD, all four wheels simultaneously get the same amount of torque and power to propel the vehicle forward. This happens regardless of the traction level and will continue even if one of the tires leaves the ground.

With an All-wheel-drive (AWD) system, all four tires are spinning to propel the vehicle, but the system is more intelligent. AWD systems monitor the traction of each wheel and adjust torque levels in other wheels in the event of a loss of traction.

AWD systems are usually always on and work with regular driving, like on the highway. They make driving safer but sometimes put extra weight on a car. Combine that with the extra energy used to propel four tires instead of only two, like in a front-wheel-drive system, and you can experience a loss in fuel economy.

What does AWD Mean on Kia Sportage?

So, a Kia Sportage with the abbreviation AWD beside means that the SUV is equipped with an all-wheel-drive system. This is opposed to the standard FWD that you will see on many Sportage models. FWD stands for front-wheel-drive, and it is the most common drivetrain type among vehicles. AWD will also be shown in place of 4WD or 4x4, as discussed above.

How does the Kia AWD System Work?

The AWD system that is equipped on Kia models is the Dynamax All-Wheel-Drive system with locking center differential. That Dynamax AWD is built by a different company called Magna Powertrain, which produces parts for various automakers.

This special AWD system distributes torque to all four wheels, but not on an equal basis. The AWD system intelligently responds to changes in the terrain and the traction of each tire. In the event of slippage, it applies more torque to the wheels that still have traction. This gives the car more stability and the driver more control.

Dynamax states that their AWD systems anticipate changes in roadway conditions. In contrast, other AWD systems can only react after something has occurred on the road. The Dynamax AWD also functions electronically in ways that other AWDs function mechanically.

This cuts down on the size and weights of the parts of the AWD, helping to reduce the strain on fuel economy.

Here is a video explaining the mechanics and benefits of the Dynamax AWD on the Kia Sportage:

How does AWD Work on the Kia Sportage?

The AWD system on the Kia Sportage is the Dynamax All-Wheel-Drive system that we just described above. The system on the Sportage works in the same way by adjusting power to each wheel based on how much traction the wheel has. However, other features of the Sportage AWD help the vehicle get out of challenging situations.

What is AWD Lock on the Kia Sportage?

If you become stuck in snow or mud while driving your Kia Sportage, the AWD lock may be able to help you. On some models of Kia Sportage, an AWD Lock feature allows the driver to change the smart and responsive AWD system into a basic four-wheel drive.

This feature causes the wheels to all turn with the same torque, regardless of how much traction each tire gets. It's useful for getting the vehicle going from a parked position in snow or deep mud. You can get see an example of the feature being used in the video below.

Please note that you shouldn't use AWD lock or any four by four (4x4) features continuously or at high speeds. They are meant to be used at low speeds and on slick or hazardous terrain.

The AWD lock may not be available on all Kia Sportage models, and certainly only the ones with AWD systems. To tell if you have an AWD lock feature on your Sportage, check for a button just under your gear shifter in the center console.

This button also could be located on the left side of your steering wheel. Either way, it's a button with a picture of four wheels and the word "Lock" beneath it. This will engage and disengage the system, making your AWD Kia a true 4x4 for the duration.

How Good is the Kia Sportage on Snow? 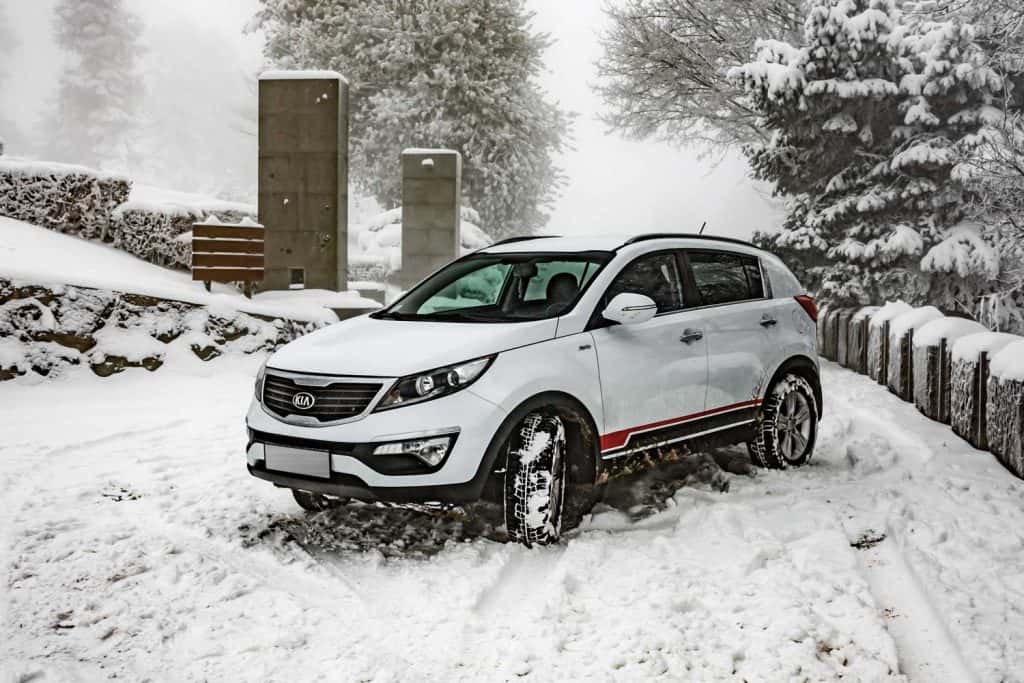 The all-wheel-drive versions of the Kia Sportage are incredibly effective at driving on snow. The AWD system makes adjustments to the torque in each wheel and helps prevent slippage and loss of control. Additionally, some Sportage models' AWD Wheel Lock features can help get the Sportage moving from a stopped position in deep snow.

For a more visual representation, here is a video that demonstrates the capabilities of a 2019 Kia Sportage in the snow:

How do I Know if my Kia Sportage is AWD?

If you bought your Kia Sportage used, you might not have a clear picture of all its features. Since most of the Kia Sportage generations have had an AWD option, there's an equal chance of your Sportage either having it or not. There are several ways to tell if your vehicle is AWD.

The first thing you should do is check your owner's manual if you still have it. These manuals will have a section explaining the AWD if the feature exists on the car. Second, you can swing by your local Kia dealer and ask them. They should be able to tell by your trim or VIN whether or not you have an AWD Sportage.

Finally, the third thing you can do is check under your vehicle for an axle shaft. This is the main component of the AWD system that connects the front axle to the back axle.

If you're thinking of buying a new 2022 Kia Sportage, you won't find any 4x4 models, but you will have the option to get an AWD version. Nearly Kia Sportage since generation one has come in an AWD version. This has been true since they moved away from the 4x4 in 2002.

Either way, you will find some of the same features of a 4x4 on the AWD Sportage. It is both effective in driving on regular highway conditions as well as difficult offroad terrain. You really can't go wrong with a 2022 Sportage.

How To Remove The Jack From Kia Sportage

Is The Kia Telluride A 4X4 Or AWD?