Ford has continuously adapted and evolved its line of Transit vans, making them satisfy all forms of demand. As a result, there are nine different Transit models available, each with different functions. Because of this, it's tough to tell which of the models, if any, have AWD or 4WD capabilities. Fortunately, we researched all nine models and their upgrade options and have the answer for you here.

That's the basic list of models that come in an AWD version, but there's a lot more to discover about the Ford Transit. In the rest of this post, we will discuss the differences between AWD and 4WD, explore the details about each of the Ford Transits listed above, and discuss some of their other features. 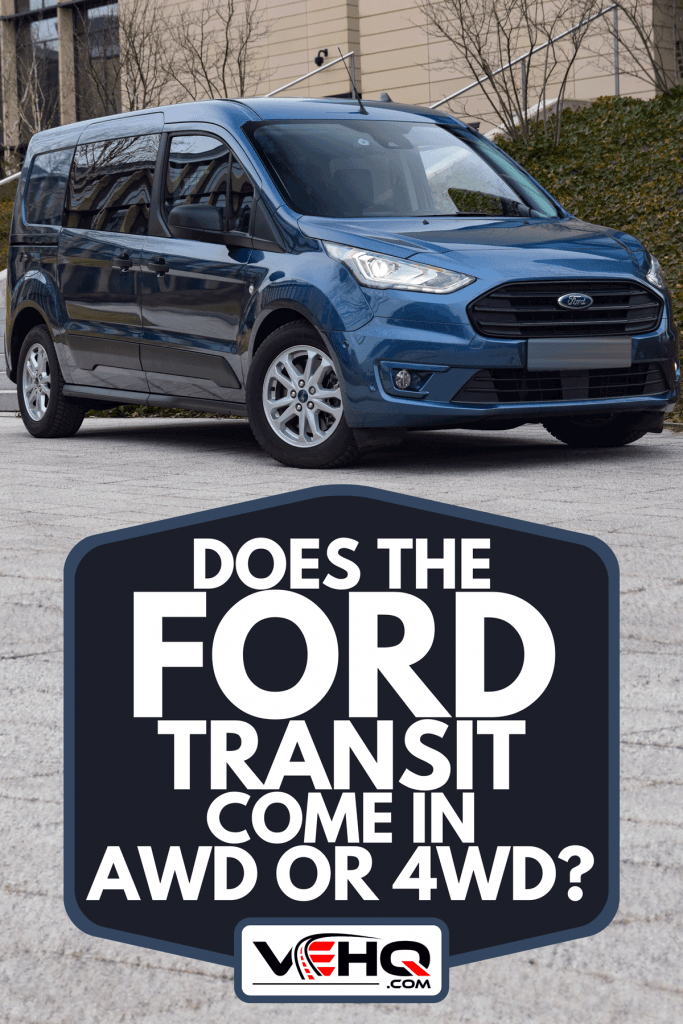 Of the two broad types of Ford Transit, only the 2021 standard models come with the option to upgrade to an AWD system. The brand new 2022 Ford Transit Connect models only come in rear-wheel-drive. Here is a little more on each of the Ford Transit models that can be equipped with an AWD system:

First, the Ford Transit Cargo is a traditional cargo van with two seats in the front of the vehicle and open space behind them. AWD is optional on the Transit Cargo, with RWD as its standard drivetrain. The AWD option is available in combination with any other feature choices such as high roof vs. standard roof or regular V6 engine vs. EcoBoost V6 engine.

Second, the Ford Transit Crew is a cross between the Cargo and Passenger versions. It has space for both cargo while allowing for more passengers than the regular Cargo Transit. The Transit Crew has seating for up to five people, with plenty of storage behind the seats. AWD is available in all feature combinations, just like the Transit Cargo.

Third, the Ford Transit Passenger XL is a 15-seater van with modern safety features to protect all of your passengers. As with the Cargo and Crew, you can upgrade the Passenger XL with an AWD system. Additionally, the AWD is available on any roof/engine/wheelbase length combination for the Passenger XL.

Finally, the Ford Transit Passenger XLT is also a 15-seater van like the Passenger XL. The main difference between the two is that XLT has a few cosmetic and feature upgrades. Like the other three Transits on this list, you can upgrade the drivetrain on the Passenger XLT to AWD. The same is true for any other feature combination, like with the Passenger XL.

One thing to note about all of these versions of the Ford Transit Van is that even though the AWD feature is available in combination with any other option selection, other options are not always compatible. For example, if you want to get a high roof Transit, you have to have an extended wheelbase. High roofs are not available on regular or long-wheelbase Transits.

Why Doesn't the Ford Transit Connect have AWD?

The new Ford Transit Connect comes in both a passenger van and a cargo van. The Connect versions of the Transit van are smaller than their predecessors but have updated interior features. The AWD feature is one option that did not shift from the standard Transit to the Connect.

The reasoning behind the lack of AWD on the Connect models of the Transit isn't fully known. But, the Connect is designed to be smaller and more fuel-efficient. The addition of an AWD system would make the Transit Connect heavier and less fuel-efficient than Ford desired for the rework of the model. Transit Connect is still a great cargo or passenger van even without the additional drivetrain features.

What is the Difference Between AWD and 4WD?

As we've said, there is no 4-wheel-drive option available on any of the Ford Transit vans. It would probably be helpful to briefly explain the difference between 4WD and AWD if you are unfamiliar. We will compare the two to regular front-wheel-drive, which is standard on all the Ford Transits.

Front-wheel-drive (FWD) is a drivetrain where the two front wheels are responsible for propelling the vehicle forward. Two more advanced drivetrain systems provide greater traction, stability, and control: four-wheel-drive and all-wheel-drive. All four wheels turn simultaneously in a four-wheel-drive (4WD) system, giving all wheels equal power and traction. 4WD systems are usually not continuous and can be turned on only when needed.

On the other hand, all-wheel-drive (AWD) systems are typically always on and are more adaptive to road conditions. AWD responds to how the road changes and transfers power to tires with more traction in rough conditions. This makes the ride more safe and controlled overall.

The AWD version of the Ford Transit is built to handle offroad conditions during your personal or work life. Cargo and passenger vans can be heavy and difficult to drive. When driving offroad, where you usually have less favorable conditions for traction, you'll want the AWD on the Ford Transit to help keep you safe.

Here is a video that conducts a few tests of the AWD on the Ford Transit with the V6 EcoBoost engine:

In this video, the diagonal ramps where traction is often lost will mimic some offroad conditions. This should give you an idea of how the AWD version of the Ford Transit can handle these situations.

How Well do Ford Transits Do in Snowy Conditions? 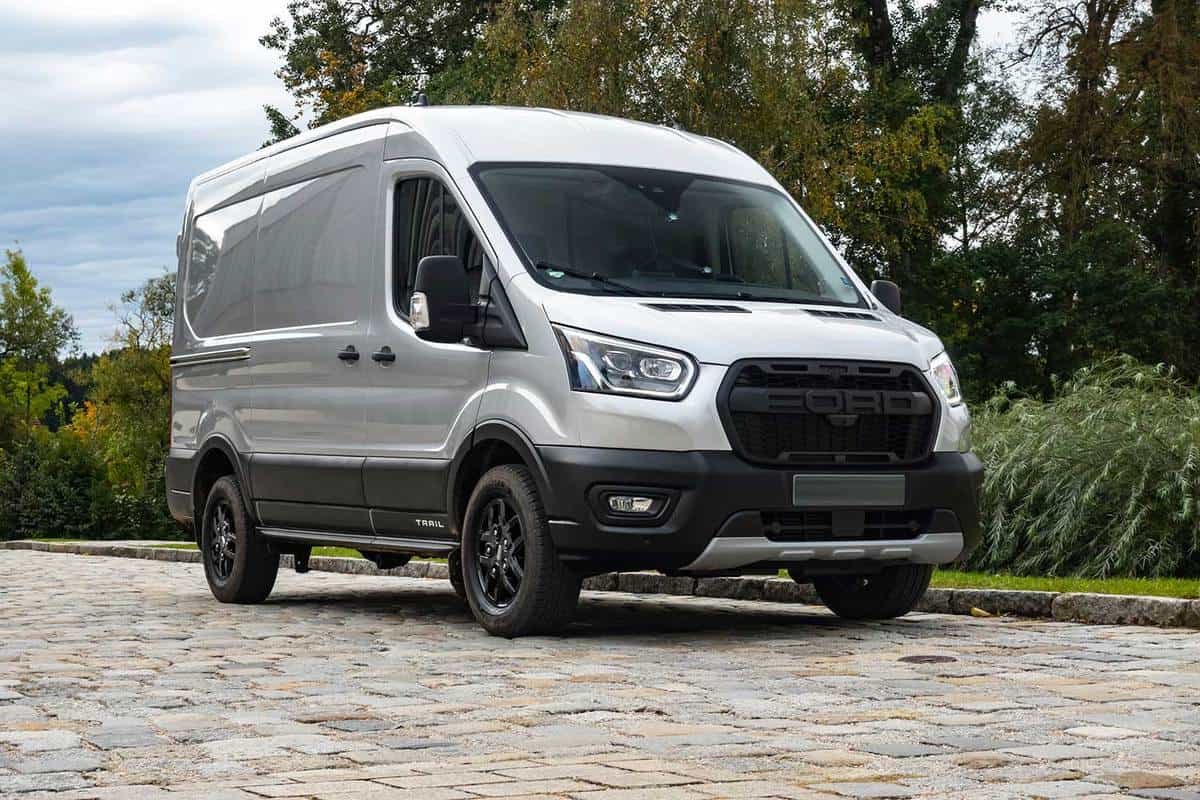 If you live in a snowy climate, you'll want to ensure that you decide to upgrade your Transit van to include the AWD. Doing so will make your van perform as best it can on snowy roads.

Does the Ford Transit have Cruise Control?

For more information on the Ford Transit cruise control, please check out this article: Do Ford Transit Vans Have Cruise Control?

Does the Ford Transit Come in Diesel?

Some people prefer diesel for the increase in efficiency and fuel economy. You can find some panel vans on the market that come in a diesel option, but the Transit is not one of them. None of the 2021 standard Ford Transits or the 2022 Transit Connects come with a diesel engine option. Instead, the only two options are a traditional V6 which can be upgraded to the second option; an EcoBoost V6. Both of these V6 engines run on gasoline.

The Ford Transit line has a panel van for you, no matter what your needs are. From cargo to passenger with an option in between, the ability to customize these vans is what makes them special. The AWD is an option you should definitely choose if you constantly drive offroad or in bad weather. The Transit will ensure you and all your cargo arrive safely.

If you found the information in this post helpful, please see a few of our others: