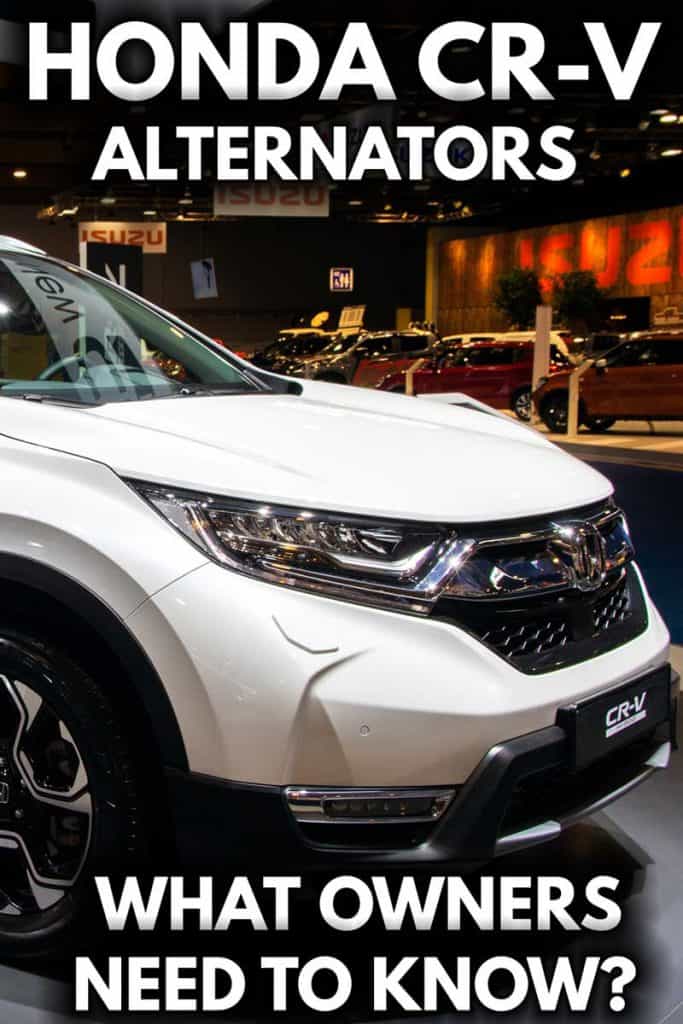 Looking for information about the alternator in your Honda CR-V? You've come to the right place. In this article, first we will discuss the basics of alternators - what they do and how to tell if yours has gone bad. That way, you can personally identify if the problem with your vehicle is actually a bad alternator. Next, we will provide you with some of the most popular and reliable alternators on the market for the Honda CR-V.

What Does An Alternator Do?

Your alternator works in conjunction with your vehicle's battery to supply electricity to all of your electrical components. Without it, your lights, stereo, instrument panel, and other electrical accessories could not function. The exact way it works gets pretty complicated, but we will keep it simple in our description.

The alternator gets its power from the spinning of the crankshaft in the engine. That electrical power is then sent to the battery so it can power your electrical system. Alternators are usually found in the front of your engine bay, and they look sort of like a metal salad spinner:

How Reliable Is The Alternator In The CR-V?

Like many parts on your vehicle, your CR-V's alternator can eventually wear out and need replacement. That means that, the older your CR-V is and the more miles it has on the odometer, the more likely you are to need to replace the alternator.

Scanning the various sites that report on common vehicle issues, we see more reports of alternators failing on the older models. For example, Repair Pal shows that alternator bearing failure is most common on 1997 to 2002 CR-Vs, which is the first generation that the CR-V was built. Still, with only 6 reported cases of alternator issues, this is not one of the most common complaints even for those early models.

As for any CR-V built for the model year 2003 and beyond, alternator issues have not become common yet. That doesn't mean that it's impossible for those models to need a new alternator, especially high-mileage cars - after all, we are talking about vehicles that are 17 years old now. However, it appears that the alternator in these newer models is a reliable unit that will only fail after an excessive amount of use.

How Much Does It Cost To Replace The Alternator For A Honda CR-V?

The cost to replace your alternator can vary depending on which generation of the Honda CR-V you own. As you can see, the price generally ranges between $350 and $400. For some reason, third-generation models see a big jump in price over the others. You will also see that the most recent generation, the 5th, is not represented here. That's because alternator services are so rare on these new vehicles that there are not reliable cost estimates online - most shops do not even carry this product because it is so rare for one to fail.

How Do I Know If My Alternator Is Bad?

Before you go about replacing your alternator, it's probably a good idea to verify that it is indeed your alternator (and not another part) that has gone bad. According to this great How Stuff Works article, here are the most common signs of a bad alternator:

Can A Car Run With A Bad Alternator?

Okay, so you have determined that your alternator has gone bad. What happens now - can you still drive your vehicle? Well, it depends. If the part is just starting to wear out, it may not be supplying as much electricity to your battery as normal, but the car will still function. You will likely notice some of the less severe warning signs like dim or flickering lights, slight trouble starting, etc.

However, if the problem gets too bad and the alternator stops supplying enough juice to keep the battery charged, your car will fail to start. And even if your car has started, it could eventually die if the alternator gets too weak. If you are aware that your alternator is getting bad, shutting off all unnecessary electronics like the HVAC system and stereo can help prolong the distance you can drive.

The brand-new Parts Player alternator is manufactured with only premium quality components. It has been designed to meet or exceed all specifications of the original equipment manufacturer (OEM) and comes with a one-year warranty.

If you are looking for the very best alternator for your Honda CR-V, you probably want only new parts. However, this CarQuest remanufactured alternator has received great reviews and appears to be a reliable option. And if you live close to an Advance Auto Parts store, you can pick up this part locally so no waiting for shipping.

Click here to check out the part on advanceautoparts.com.

DB Electrical manufactures these aftermarket alternators to meet OEM standards and guarantees the product for one year after purchase. What's great about this product is that the price is very low for a brand-new part, and the reviews show that the majority of owners are satisfied with this product.

This DB Electrical alternator is one of the most expensive options on Amazon, but it is also the most well-reviewed. In fact, at this point, all reviewers have given this new part 5 full starts in their reviews. I guess you get what you pay for with Honda CR-V alternators.

It can be tricky to find alternators for newer models, but this Discount Starter and Alternator unit appears to be a good option for 4th-generation CR-Vs. While there are no reviews yet, the manufacturer claims this is a new part (not rebuilt) and as such we can expect it to work well.

More about the Honda CR-V

We hope you found this post helpful. We think you'll find these interesting too -

Can You Tow with a Honda CR-V?

Honda CR-V not starting: What to do?

Honda CR-V: What Are the Common Problems?