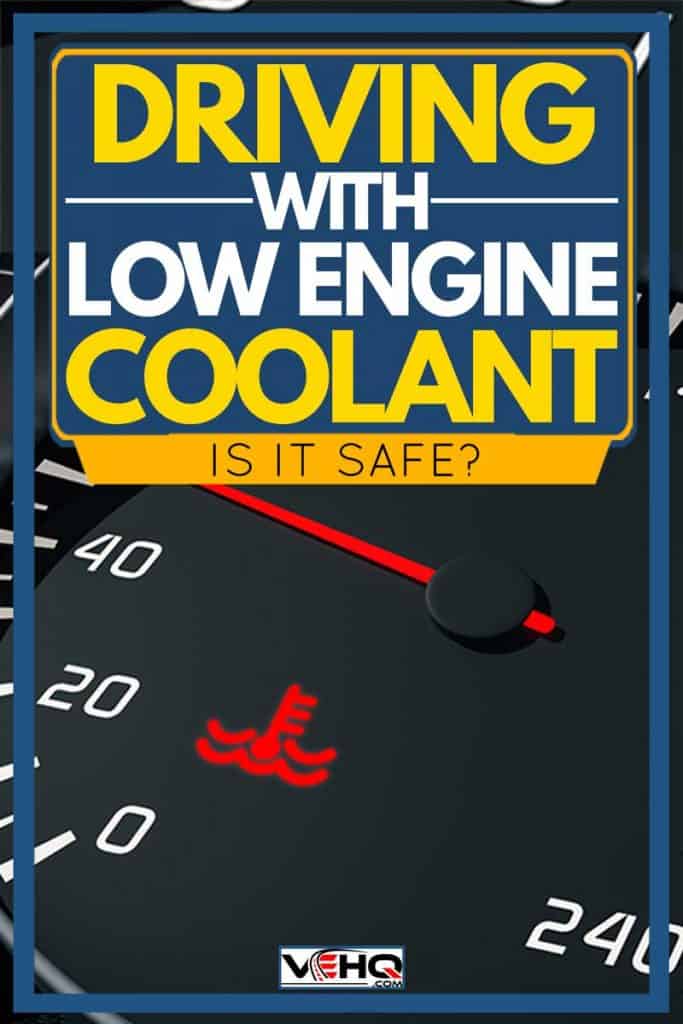 Cars being low on coolant is an issue drivers tend to encounter frequently. This situation has led many people to wonder if driving their vehicles on low coolant is dangerous. After some research, we found an answer to this question that should shed light:

Driving a car with low coolant levels isn't a wise move. It's quite dangerous as low coolant can cause several different problems:

Each of these problems could cause long term damage to your vehicle. You'll want to avoid driving a car with low coolant levels as much as possible. Our following sections will help prevent this issue by diving into more info about the topic.

What Are the Signs of Low Coolant?

If you want to avoid driving on low coolant, you must understand the signs of it. There happen to be several signs that can alert a driver to a fault in your cooling system. Knowing these alerts will be crucial in ensuring your engine doesn't sustain damage.

Any experienced driver should be familiar with where their temperature gauge will sit when everything's operating correctly. If this gauge's needle starts creeping toward the red, it should be a warning sign that something gone wrong with your car's cooling system.

The driver should then pull over and pop open their car's hood. This action will help cool down the engine before damage occurs. You'll also get a chance to diagnose the problem and see whether it's something with an easy fix, such as a leaf blocking your radiator air intake.

Your car's heater works by using the same heat collected from the engine by its cooling system. As a result, a fault in your cooling system could cause some weird things to happen with the internal heating.

It could result in a constant flow of hot or cold air due to this issue. A complete lack of air would be another possibility. In either case, this situation won't be a pleasant one and should provide a warning that something could be wrong under your car's hood.

An engine running at the proper temperature will burn fuel at an efficient rate. This will ensure your car's fuel economy remains low. But when this temperature changes, the fuel won't burn as effectively. Emissions will then increase from your car's exhaust.

If you do notice a dip in your car's recorded miles per gallon, check your coolant level and temperature gauge for overheating signs.

Coolant or antifreeze will have a sweet smell, which is distinct and noticeable. If this liquid starting leaking from your cooling system, the scent might travel into the cabin. This situation is more likely to occur when the engine's hot.

If you're capable of recognizing different engine fluid smells, it's an effective way to diagnose potential issues quickly. You'll be able to notice the problem much quicker and help avoid significant damage to your car.

Your car's coolant light usually appears as a thermometer containing a series of wavy lines next to it. When these lines are lit up in red, it means that your engine has reached its temperature limit. You should pull over immediately.

In most situations, a low coolant level is the result of a leak, which you should try to locate after pulling over. If the hole happens to be small, you might be able to refill the coolant reservoir. You can then continue your journey without losing a lot of fluid.

Can You Drive a Car Without Coolant? 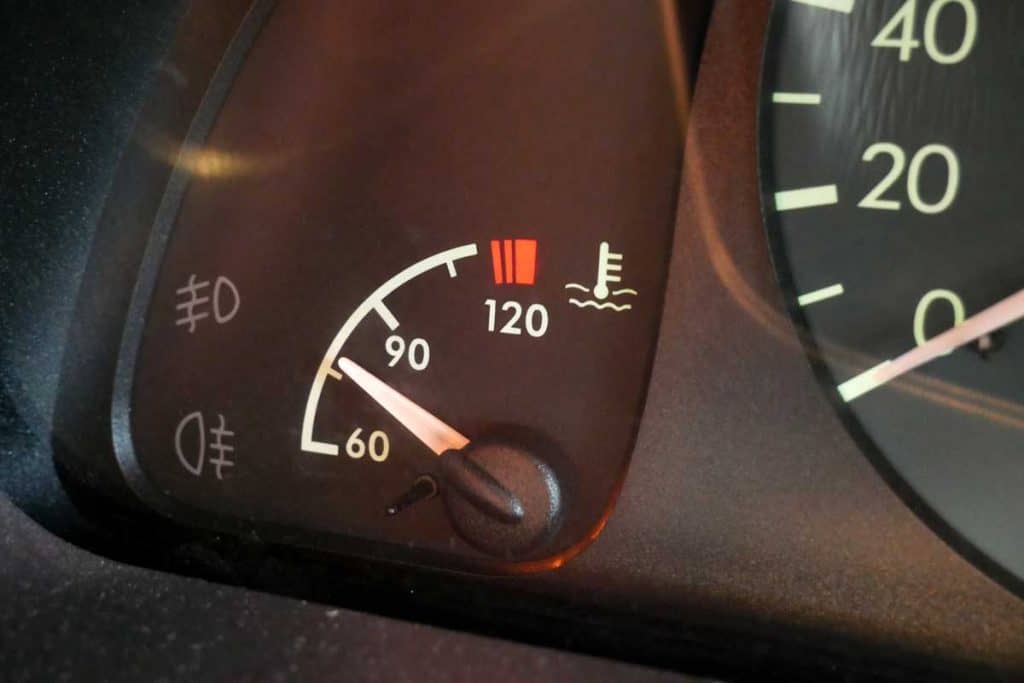 Driving a car without coolant won't necessarily cause instant damage. It'll end up depending on what kind of car you're driving. For example, high-end vehicles will have an ECU (engine control unit) that often has a limp-home mode.

This mode will limit the risk of damage provided by driving your car without coolant. It's able to offer this fantastic ability by firing the cylinders in a different sequence. This causes cool air from the inlet to feed into one bank of cylinders at a time. The other rack can cool down between firing due to this function.

It should then provide the option of driving a little further when an engine happens to be overheating. Honestly, it could end up being just enough to get your car home or into a nearby garage.

We should also mention many new cars come with an automatic cut-off feature. This aspect is designed to protect your car's engine from getting heat damage. It capable of offering this feature by using the cooling system's thermostat to kill your car's power when it reaches a certain temperature point. Your car will then not restart until its temperature cools down to a sufficient level.

How to Add Coolant to my Car?

If you intend on adding coolant to your car, there's a little prep work before starting the actual process. You'll need the correct supplies to make sure this task gets done without issue. The following things should be done and remembered before adding your coolant to a car:

Things to Do and Remember Before Adding Coolant

The Process of Adding Coolant to Your Car

Does it Matter What Coolant You Put in Your Car?

The key to answering this question lies in understanding what coolant is and how it works. You might be a little shocked to hear that coolant has little to no role in actually cooling down your car's engine. This task is done by a 50/50 distilled water mixture in your radiator.

Coolant's job is a little different as it's meant to lower the freezing temperature of the water and prevent rust. The process for these two jobs becomes a tad dissimilar depending on your car's engine.

Car manufacturers have started using more exotic types of metal for engine blocks, gaskets, and heads. This action caused the need for different types of coolant. After all, some metals might require more rust inhibitors, and others may need the ability to dissipative heat quicker.

It's quite clear that the type of coolant a car needs depends on the metals used in its engine. So, the answer to the question at hand is yes. It does matter what coolant you put into your car's engine. You should always use the coolant mentioned in your car's owner manual to ensure nothing goes wrong.

Does it Matter if You Mix Coolants?

We suggest keeping it simple and sticking to what your owner's manual recommends when it concerns coolant. Mixing the wrong types can cause a serious amount of cooling system and radiator damage. These problems will then lead to an enormous repair bill that nobody wants. Stick to the owner's manual, and it'll save you from any stress or frustration during this process.

Is Coolant the Same as Antifreeze?

Antifreeze and coolant are similar, but these fluids aren't the same. Antifreeze happens to be a concentrated, glycol-based liquid that needs diluting before using it. Coolant can instead be purchased as a pre-mixed solution of both antifreeze and water.

We should note that antifreeze consists mainly of ethylene glycol. This aspect makes it perfect for use inside your car's cooling system to ensure issue-free engine operation in harsh weather conditions. In other words, ethylene glycol will prevent coolant liquid from freezing inside your radiator and lowers its freezing temperature.

On the other hand, the engine coolant is a mixture of water and antifreeze. This mixture usually has a ratio of about 50:50. Coolant is made with this ratio because antifreeze works best when used as a diluted liquid and fighting against high temperatures. Using coolant in your cooling system will help make sure the engine regulates the proper temperature at all times.

What Happens if You Use the Wrong Coolant?

The cooling system's protective layers will become thinner at a graduated rate, as well. Your engine coolant will require more frequent changing due to this issue. Other problems arising from using the wrong coolant could be damage to your car's water pump, radiator hoses, and cylinder gasket.

How can I Know Which Coolant is Right for my Car?

As you know, different types of coolants do exist in today's market. This situation often leads to people asking what the right option for my car is? Well, let's go over the main kinds of coolant to find the correct answer for you.

Meanwhile, OAT is much more effective, with it only requiring a change every 50,000 miles or five years. General Motors, Saab, and VW vehicles are known for using the OAT formula. The fluid itself will be colored orange.

The third type, HOAT, happens to be a derivation of OAT and has the same change intervals unless specified. Ford, Chrysler, and European vehicles used this type of formula. Its distinct yellow color will be a crucial difference from the other types.

If your car isn't from one of the brands mentioned in this section, reading your car's manual will give you the necessary information. It's best to consult this manual whenever buying or using coolant.

We hope our discussion of all things coolant answered your questions on the topic. But if you have any more, feel free to ask them in our comment section. We'd love to help in any way possible.

Know the other reasons that might damage your car! Read below -

Driving with low oil? Here's what could happen

Evaporative Emission System (EVAP) leak detected? What to do?