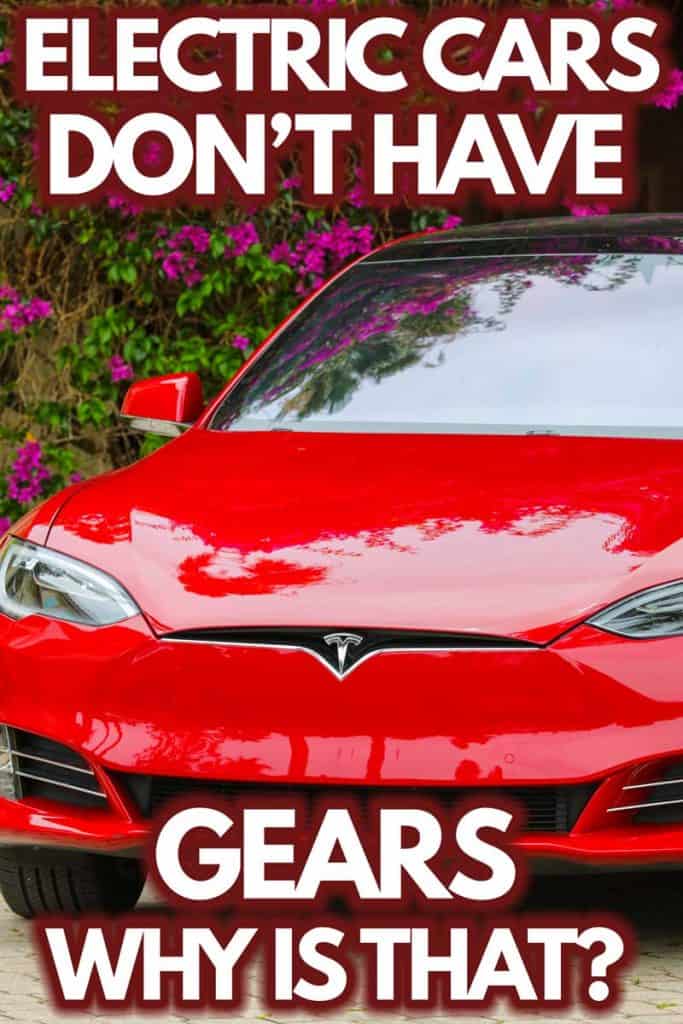 Electric cars, for the most part, do not use multiple gears in their transmissions for a simple reason - they don't need them. They are able to produce tons of torque and power over a very broad RPM range - 0 to 20,000 RPMs - so they can operate at all speeds necessary for driving without needing a gear change. That's right, just one gear does the trick.

To anyone used to driving conventional gas or diesel-powered vehicles, this sounds sort of crazy. To help you understand what all is going on here, we will cover all aspects of electric car transmissions in this article.

Why Electric Cars Don't Use Gears

While not every electric car uses a single-speed transmission, the vast majority do. There are a few characteristics of electric motors that allow for the use of just one gear. And, because adding more gears is unnecessary and would add weight, most manufacturers choose to use just the single speed. In fact, most carmakers would use a setup like this if they could, but they are forced to engineer complex and expensive multi-speed transmissions because of the limitations of internal combustion engines.

Here are the 3 main characteristics of EVs that allows them to get away with just one speed.

Unlike production gas and diesel engines, which are usually limited to 4,000 to 7,000 RPM (revolutions per minute), electric motors can operate at up to 20,000 RPM. Because they can operate within such a broad range of RPM, these vehicles can drive at any speed without needing to shift gears.

If gas cars used just one gear, they would struggle to produce enough power down low in the rev range to move the car from a stop, and then be limited to a very low top speed once they hit their redline. Depending on the gear ratio, EVs can achieve top speeds of anywhere from 91 (in the case of the Chevy Bolt) to over 160 miles per hour (Tesla Model X, Model 3, and Model S as well as the new Porsche Taycan).

Electric motors are also capable of producing power in a very consistent manner over their broad range of RPMs. To see why this is an advantage, let's think about how this compares to the power delivery in a conventional gas-powered vehicle.

Study the horsepower curve of any gas-powered vehicle, and you will see that the lines showing horsepower and torque rise and fall in an arc as the engine's revolutions increase from 0 to redline. It looks something like this:

Part of a transmission's job is to keep the RPMs in the middle of the rev range where the engine is producing enough power to drive while maintaining peak efficiency. If the RPMs get too low, there is not enough power to move the vehicle, and if they rise above a set limit (the "redline"), the engine can be irreparably damaged.

Meanwhile, electric motors operate on a much straighter power curve. This means that no matter where in the RPM range you are, the motors are still producing close to full power and torque. The car can take off from 0 RPM without a sweat because it has access to its full torque rating from way down there. It can also hum along at 15,000 RPM without the danger of breaking the internal components of the motor.

As we mentioned, electric motors produce high levels of torque, even at 0 RPM. This is not the case for traditional cars, whose engines do not produce enough grunt to move the vehicle at very low RPMs. To keep from stalling the engine, those vehicles use their transmission to decouple from the drivetrain while idling. Electric cars don't need transmissions to disconnect the motor from the transmission because the motor is strong enough to move the car from a dead stop. So, they just lock into one gear and don't even bother with all the rest of the transmission functions.

Do Tesla Cars Have Gears?

Like just about every other electric vehicle, Teslas (except for very early versions of the Roadster) do not use multiple gears. Instead, they use a single reduction gear to translate the energy from the electric motor to the wheels.

This reduction gear simply slows down the incredibly high rotating speed of the engine into wheel speeds suitable for road use. The rotational forces from the motor are fed through this single gear before being sent to the driveshaft, which is responsible for sending that power to the wheels.

Do Electric Cars Have a Clutch?

First, we should clarify what we are talking about when we say "clutch." Many drivers think of the third pedal next to their brake pedal, but in reality, the clutch lives inside the transmission.

These clutches are used to disengage the engine power from the driveshaft. When you are driving, of course, you want the power to be sent to the wheels at all times. As we explained above, however, internal combustion engines cannot produce enough power at low RPMs to move the car. And letting them go to 0 RPMs means the engine would die, requiring a restart to get moving again. So, clutches are used to keep the gas engine from stalling at low RPMs.

Electric cars never require the power to be disengaged from the driveshaft, so they do not use a clutch. Using just one gear, electric motors simply send their power straight to the wheels at all times. In order to stop, they simply go all the way down to 0 rpm. This also means that electric cars can operate without idling when stopped.

Can an Electric Car Have a Manual Transmission? 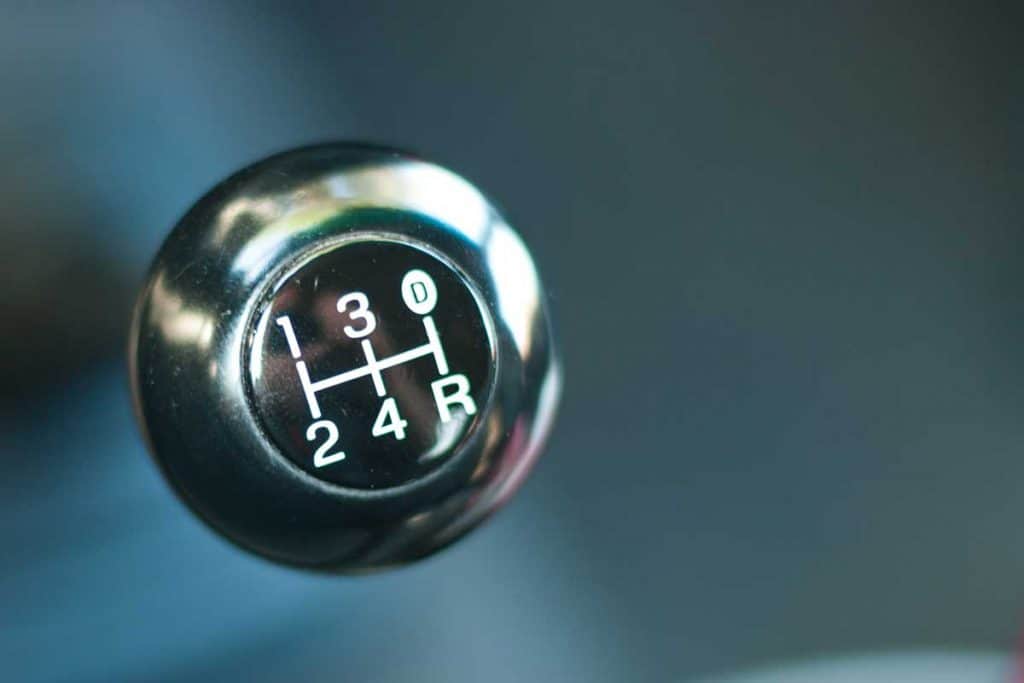 No current electric car uses a manual transmission. Because there is no need for a clutch to be paired to an electric motor, it doesn't make much sense to put a manual gearbox into an electric vehicle.

As a thought experiment, however, it would technically be possible to install manual transmission into an electric vehicle. The motor would be able to send power to the wheels through a manual transmission without too much trouble, according to Jason Fenske with Engineering Explained.

There doesn't appear to be any reason to do this, however, other than driver enjoyment, so it seems very unlikely to ever appear as an option in a production electric vehicle. Who knows, though, perhaps as EVs start to really take off, some performance-oriented manufacturers like Porsche will actually put a manual in an EV.

Do Electric Cars Have Gear Sticks?

Electric vehicles do not use gear sticks, also referred to as shifters, and there are two good reasons:

1. Electric cars (with one exception - more on that later) don't have more than one gear, so there is no reason to use a gear stick to select between gears.

2. Electric vehicles do not have manual transmissions. Some do use a gear select, the kind you see in most automatic transmission vehicles, in order to select between drive, park, and reverse.

Do Any Electric Cars Have More Than One Gear?

Currently, there is only one electric vehicle that uses more than one gear: the 2020 Porsche Taycan. This new model features a whole 2 speeds. And that's big news, even if it is just one extra gear.

Even though it is not strictly necessary for an EV to operate, this extra gear helps with acceleration, battery life, and even battery cooling. If this all sounds great and dandy for you, just know that the Taycan is priced between $150,900 and $241,500. So start saving your pennies.

And, in fact, the original Tesla model, the 2008 Roadster, initially featured a 2-speed transmission, but it was quickly dumped in favor of a single-speed unit because of reliability issues.

Try One For Yourself!

If you ever get the opportunity, test drive an electric vehicle for yourself. You might find that you quite like the experience of a single-speed transmission coupled with the electric motor. For one thing, they provide an exceptionally quiet and smooth driving experience. And the instant torque means that even the slower ones still feel very quick off the line. As battery and recharging technologies continue to advance, these cars will become very commonplace on our roads, so there is a good chance you will find yourself owning one in the future - if you don't already.