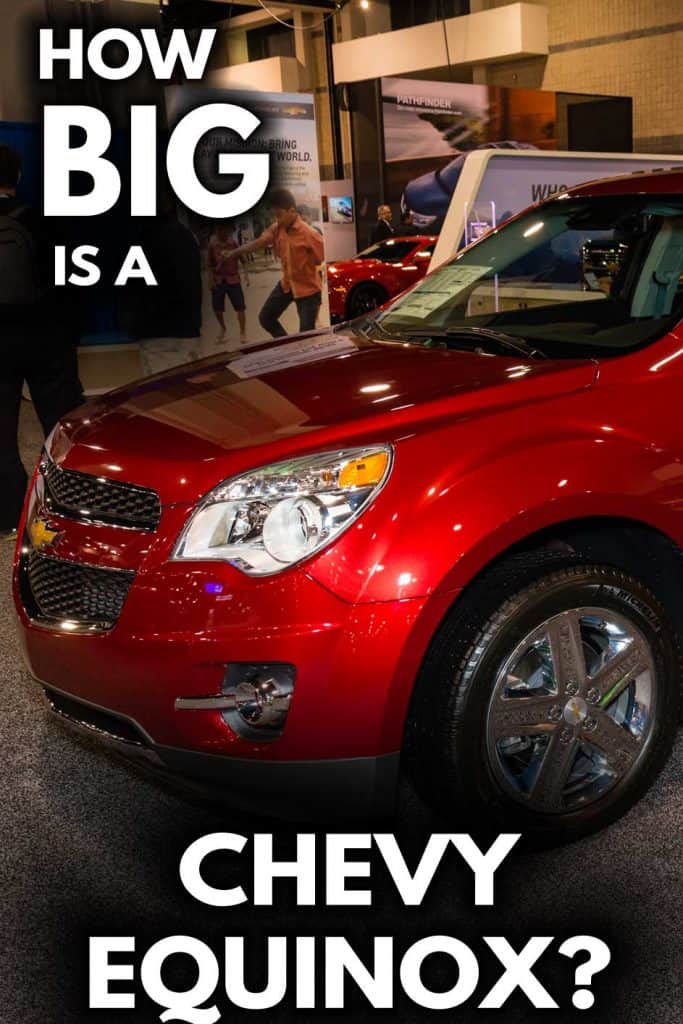 Sport Utility Vehicles (or SUVs) are highly popular these days. A smaller version, such as the Chevy Equinox, get some of the best fuel economy ratings in its class. It also provides a smooth ride with reliable handling. Right now, you may be interested in this car and wondering to yourself, ‘how big is the Chevy Equinox?’

Now that you know the exterior dimensions of the Chevy Equinox let’s take a closer look at each of these parameters in more detail below. We will also explore some interior aspects, including cargo space, passenger seating and head, leg, and shoulder room. We will then review the different models and compare them to other versions in their class.

So, if you’re ready to learn more about the Chevy Equinox, then let’s get started!

How Long Is A Chevy Equinox?

The Chevy Equinox is 183.1 inches or 4, 651 millimeters long. This is in relation to the third-generation models, consisting of vehicles designed in 2017 to the present year. The current Equinox is somewhat smaller than its predecessor and similar in size to other compact SUVs in its class.

How Wide Is A Chevy Equinox?

The Chevy Equinox is 65.4 inches or 1, 844 millimeters wide. Once again, this dimension is based on the current or third-generation models. These are the most recent and built within the past two years. The Equinox is a compact crossover and, therefore, mechanically smaller than the standard SUV.

How High Is A Chevy Equinox?

The Chevy Equinox is 65.4 inches or 1, 661 millimeters tall. Its height is comparable to other crossover SUVs in its class. In contrast with a standard SUV, however, the Equinox is approximately 5 inches shorter.

How Much Does A Chevy Equinox Weigh?

The Chevy Equinox weighs about 3327 pounds. Concerning curb weight, which is the total mass of a vehicle, this can be anywhere between 1, 593 kg, and 1, 662 kg. Curb weight is determined based on standard equipment and all vital operating consumables, including motor oil, transmission oil, coolant, air conditioning fluid, and a full tank of gas. This does not include additional passenger or cargo weight.

How Big Is The Back Of The Chevy Equinox?

In terms of cargo space and dimensions, the Chevy Equinox, with the rear seats folded down, is approximately 63.5 cubic feet. Passenger volume is around 103.2 cubic feet. The front headroom or clearance is about 40 inches.

How Big Is A Chevy Equinox Trunk?

The trunk space in a Chevy Equinox is approximately 29.9 cubic feet. This is the area located behind the rear seats, which, when folded down, provides up to 64 cubic feet of cargo space. In comparison to other vehicles in its class, however, it trails behind its competitors for cargo space and passenger volume.

What Is The Ground Clearance Of A Chevy Equinox?

What Are The Interior Dimensions Of The Chevy Equinox?

The interior dimensions of the Chevy Equinox include the headroom, legroom, and shoulder room. For the 2019 edition, these include the following:

Does The Chevy Equinox Have Third Row Seating?

The Chevy Equinox does not have three rows of seats. A sliding second-row seat helps to maximize the interior space for both passengers and cargo. It is a relatively sizeable compact crossover, even without the third-row seating, which is why it is often considered a mid-sized sport utility vehicle.

What Are The Different Chevy Equinox Models?

The 2019 Chevy Equinox comes in four model styles, which include the L, LS, LT, and Premier. The LT and Premier models have three different engine sizes to choose from. The L and LS come equipped with the standard 1.5L turbocharged 4-cylinder engine. An all-wheel drive is also an option for all models except the L series.

What Are The Differences Between The Equinox LS And LT?

The 2019 Chevy Equinox LS and LT models, although similar in many ways, contain distinctions that each apart from the other. The most notable of these include the following:

What Do LS LT And LTZ Stand For?

About the Chevy Equinox, LS stands for the ‘Luxury Sport’ model. The LT is the ‘Luxury Touring’ model. However, in recent years, these acronyms have been enhanced with the addition of extra characters that have no significant meaning, such as the LSI and LTZ.

Which Is Better Traverse Or Equinox?

The 2019 Chevy Equinox appeals to smaller families who prefer versatility oversize. In terms of cargo and passenger space, the 2019 Chevy Traverse comes out ahead of the Equinox, offering additional room. The Traverse has a more powerful base engine (255-horsepower) but lacks the agility and maneuverability of the compact 170-horsepower Equinox.

The Traverse features an upscale, roomy cabin with more interior features than the Equinox. It can carry eight passengers easily with the addition of third-row seating. The Equinox, on the other hand, seats five passengers with adequate comfort and support.

The entry-level Equinox is approximately $6,000 US less money than the base model Traverse. The Equinox isn’t as ‘sporty’ as other compact SUV’s but handles well and offers a smooth, comfortable ride. The Traverse is more extensive and, therefore, more comfortable to steer, providing a more secure, ‘coddling’ ride.

What Is The Ford Equivalent To The Chevy Equinox?

The Ford Escape is comparable to the Chevy Equinox. The engines are somewhat similar, with the main difference being the extra 26-pounds of torque, giving the Equinox a slight edge. Also, the 1.5L turbo engine comes standard with the Equinox, whereas the Escape has a standard 2.5L engine. The Edge is also slightly larger than the Equinox.

To summarize, the Equinox is a series of mid-sized and later compact crossover sport utility vehicles, created by Chevrolet in 2005. It can seat up to 5 passengers comfortably and is often ranked in the top 10 best among other cars it's class. Noted for good mileage, stable handling, and a smooth ride, it is worth a second look. Check it out today!