Chances are, you want your vehicle to last for a while, but finding the best one can be difficult. Do you have or plan to purchase an Infiniti Q50 but don't know how reliable it will be? Well, we've done some research and have all of the answers for you. Let's check it out.

You can usually expect an Infiniti Q50 to last you around 200,000 miles if you take good care of it. Estimating that you drive your car 15,000 miles annually, an Infiniti Q50 should run smoothly for 15-20 years. Again, this timeline will depend on how well you maintain your vehicle but expect to get at least ten to 15 years out of your Q50.

As we begin, we will cover all things Infiniti Q50 and discuss how long yours should last. Whether you've had your Q50 forever or just bought one, we're here to help. With that said, let's dive deeper into this topic! 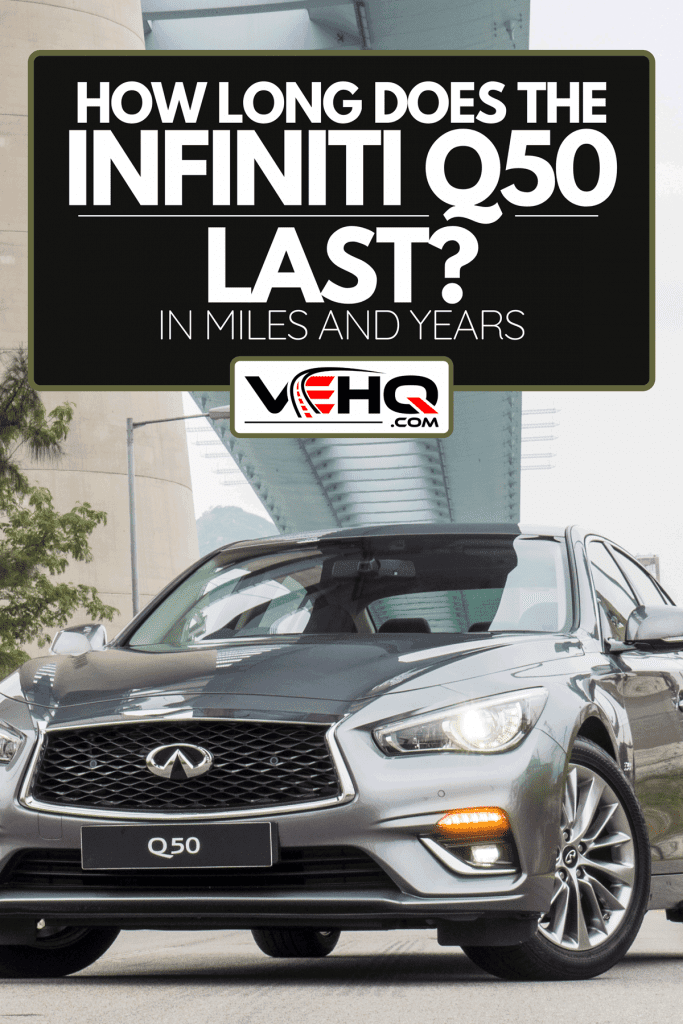 Does An Infiniti Q50 Last Long?

Generally, yes, an Infiniti Q50 should be driveable for a long time. With proper maintenance and regular inspections, you can expect a Q50 to last close to 20 years before developing serious problems.

As we said, this vehicle tends to drive up to 200,000 miles before showing obvious signs of age, which is impressive. Some Infiniti customers even claim their Q50 has been able to go over 300,000 miles, although this isn't super common.

Is Infiniti Q50 A Reliable Car?

Overall, an Infiniti Q50 will be a very reliable option. Repair Pal rates the Q50 an even four out of five for its overall capability and reliability, ranking it tenth out of 31 luxury mid-sized vehicles.

On top of that, the Infiniti Q50 also scored an impressive 83 out of 100 for being reliable, so you can expect it to be a good car.

Do Infiniti Q50's Have Problems?

Like any car, an Infiniti Q50 isn't immune from everyday maintenance issues. Most times, this will only be a minor repair, but some Infiniti customers have reported engine malfunctions that required replacement.

The good news is, these problems aren't usually due to a manufacturer defect, but rather a car owner forgetting to have their oil changed. Of course, as long as you schedule regular checkups for your Q50, you shouldn't have this problem, so try to stay on top of it.

Is Infiniti Q50 Expensive To Repair?

Typically, an Infiniti Q50 should not cost too much to fix. The average yearly price to repair a Q50 is around $650, while other similar-sized vehicles tend to cost closer to $740.

With that said, every repair price will be different depending on the severity of a car's problem, but in general, Infiniti's won't be super expensive to get fixed.

How Safe Is The Infiniti Q50? 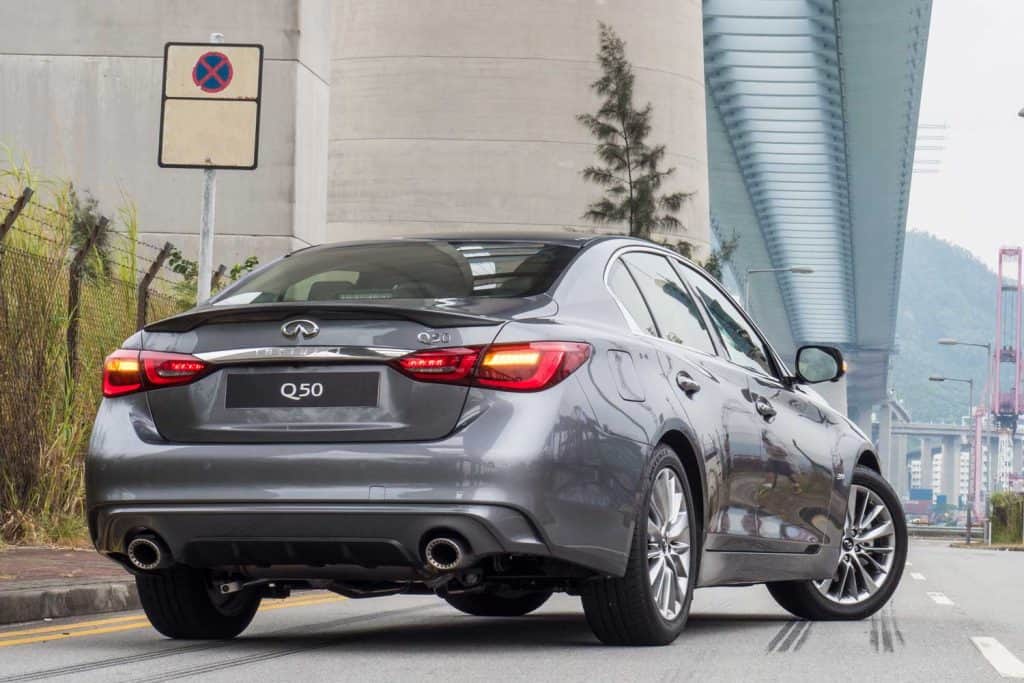 For those debating on the Infiniti Q50, it is a very safe car. This vehicle scored five stars from the National Highway Transportation Safety Administration (NHTSA) and four out of five for front-end crash protection.

The Infiniti Q50 also scored well for front and back passenger crash safety, which is important for anyone with younger children/family. This car also features forward-collision warnings with automatic emergency braking, which comes standard on all models.

Does The Infiniti Q50 Have Blind Spot Monitoring?

The Q50 also features lane departure prevention, which will keep your car from swerving out of its current lane while you're driving. Infiniti Q50's will also come equipped with intelligent cruise control, which adapts to current traffic/speed conditions around you.

How Much Does An Infiniti Q50 Cost?

The Infiniti Q50 is considered a somewhat luxurious car option, so you may even end up paying around $56,000 for extra horsepower and features.

How Long Will A Pre-Owned Infiniti Q50 Last? 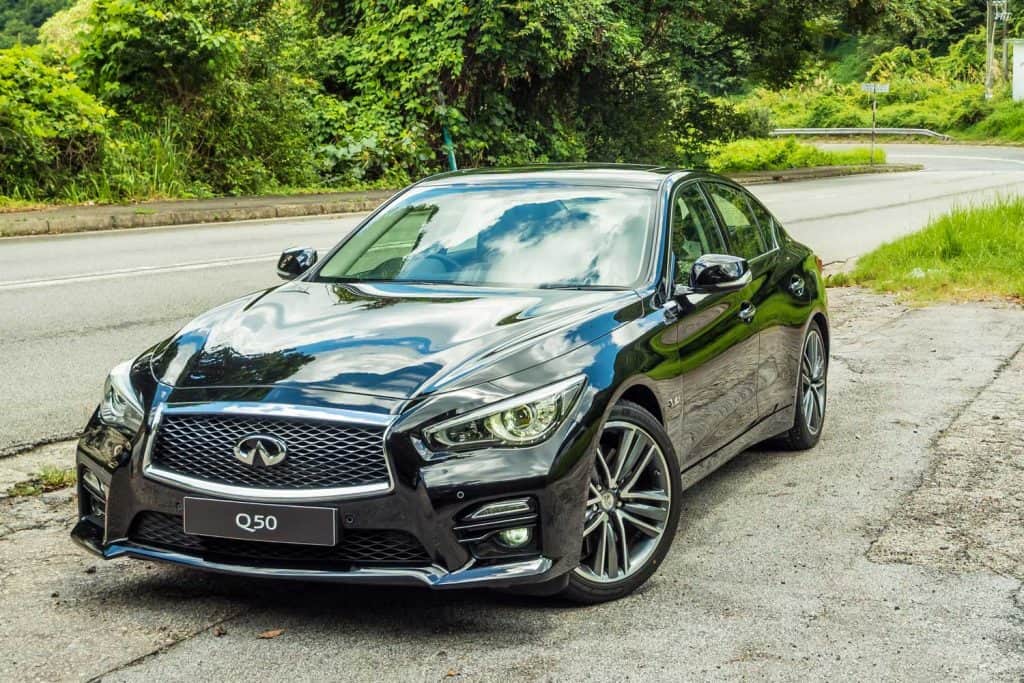 Depending on how many miles and the condition of your pre-owned Q50, lifespan varies. Like we covered earlier, a well-maintained Infiniti Q50 should last up to 200,000 miles, so check your vehicle's mileage.

Once a car, regardless of brand, reaches around 100,000 miles, you should have it checked more often, so we recommend bringing your Q50 into the shop every six months. Pre-owned vehicles, most times, will be inspected before sale for any issues, but it's best to buy directly from a reputable dealer/Infiniti reseller.

What Special Features Does Infiniti Q50 Have?

Although we've covered a few, the Infiniti Q50 is full of unique features. Some include:

These are just some of the special features that will come with your Infiniti Q50, while you can find the rest on their website here.

What Is The Infiniti Q50 Essential Package?

Infiniti's Q50 "Essential" package is an optional upgrade for your vehicle, which starts at $2,750. This specialty package includes:

Although this isn't a mandatory upgrade, it does include tons of useful features for your Q50, so we recommend it.

Is The Infiniti Q50 Expensive To Maintain?

Generally, an Infiniti Q50 shouldn't cost too much to maintain. Like we mentioned earlier, the average yearly cost to repair/keep up with a Q50 is around $650, which is pretty standard.

In the first ten years, experts estimate that an Infiniti Q50 will only cost around $8,136 for maintenance and repairs, which we don't think is more than any other mid-size car option.

Where Are Infiniti Vehicles Made?

Most of Infiniti's vehicles will be made and manufactured in Japan. Their Q50 and Q60 models, on the other hand, are often made in Smyrna, Tennessee, and Mexico, so the location can vary.

Furthermore, Infiniti does manufacture a considerable amount of their sedans and luxury vehicles here in the US and Mexico, so not all of their models will be shipped from overseas.

Does Infiniti Q50 Hold Its Value?

When it comes to holding value, the Infiniti Q50 tends to depreciate rather quickly. Cars, in general, will start to lose their value the second you pull them off the lot, so this isn't unusual.

Like many new vehicles, the Infiniti Q50 will depreciate 50% after five years, which is considerable. They also explain how a Q50's five-year resale value will only be around $21,600, so keep that in mind.

Is Infiniti Q50 A Good Car To Buy?

Overall, we would agree that an Infiniti Q50 is worth buying. Considering its advanced safety features and high industry scoring, the Q50 is one of the better mid-sized vehicle options on the market.

The Infiniti Q50 is also long-lasting, with many customers having their car run smoothly for over 200,000 miles. With that said, an Infiniti Q50 won't have a high resale value, but that's expected with this type of vehicle.

Whether you have an Infiniti Q50 or want to buy one, it's essential to know how long they last. From what we found, an Infiniti Q50 should run for up to 200,000 miles or between 15 and 20 years.

When it comes to their upkeep, a Q50 shouldn't cost more than $650 to maintain per year, although this depends. The Infiniti Q50 also scored highly for its quality and safety, so this is a great option if you want a car that performs well.

Regardless, make sure to purchase an Infiniti Q50 directly from the company or a verified reseller, and don't forget to schedule regular oil changes/inspections.

Made it to the end? Check out these helpful related posts below!

What SUVs Have Blind Spot Detection? [2021 Midsize And Full Size]