Small and compact, you wouldn't guess that an automotive battery was heavy when you first looked at one. But after you attempt to pick one up and carry it to the counter of the store, you probably wish you had grabbed a shopping cart first. Looks can be very deceiving, and the weight of a car battery is no exception. How much do these things weigh, anyway? We dug in deep to find out the weight of the average car battery and what can influence this weight.

Car batteries will weigh differently, based on brand, size, and type. The average car battery weighs thirty-nine pounds, with that weight ranging from ten pounds to sixty pounds. Nearly half the weight of a car's battery is from lead, but this does vary by model.

Now that we know a car battery's weight will depend on the type, we will discuss the different types in more detail. We've researched vehicle batteries and present our findings in this post, along with the answers to some other common questions regarding batteries. How many pounds of lead are in a car battery? What is the weight of a lithium-ion battery? To see what we've discovered, read ahead in this post. 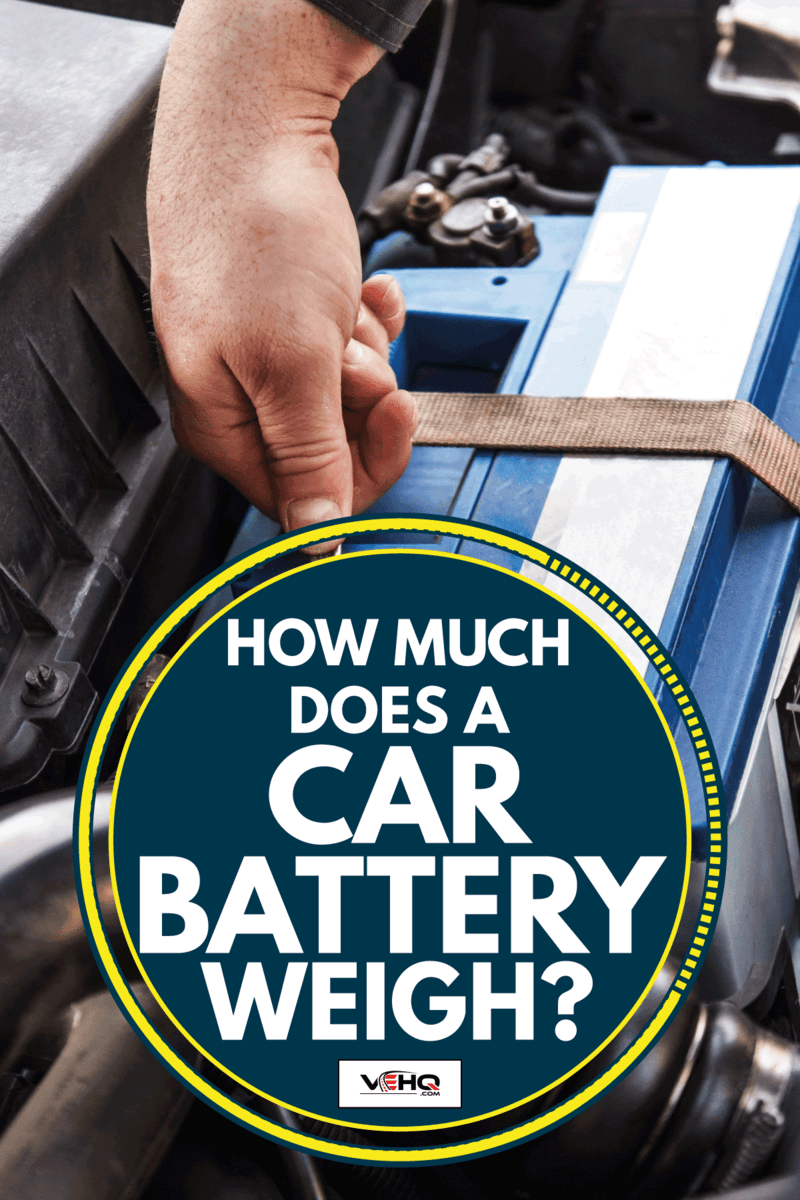 Weights of car batteries by brand

This brand of battery is found under the hood of the Toyota Corolla. It weighs 19.84 pounds.

The Duralast Platinum battery is bigger and heavier, weighing 39.01 pounds. You'll find it installed inside many models of Suburu.

The Duralast Gold battery is a little lighter than it's Platinum counterpart. It weights 37.74, and is commonly used by Nissan model trucks.

Valucraft is a brand most often utilized by Honda hybrid vehicles. It weighs 27.61 pounds.

One of the heaviest batteries on the market, the Odyssey weighs 46.60 pounds. You can find this brand on Mitsubishi Eclipses.

What are the types of car batteries?

While there are numerous types of batteries manufactured for vehicles, there are three common varieties used in most cars and trucks. We've broken down the differences between them below. 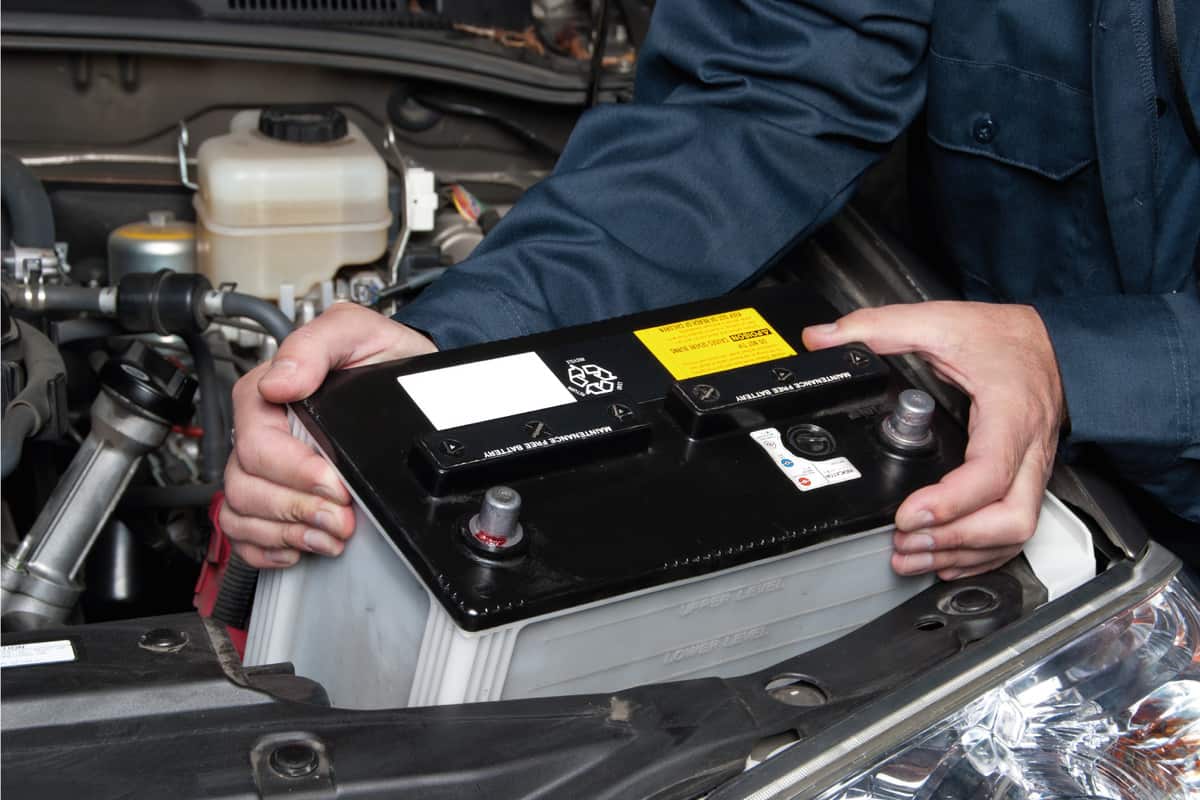 The starting, lighting, and ignition battery (SLI for short) is the most common battery type. The SLI is mostly used for automobiles. This battery is made up of six cells, each with a positive and negative set of plates. Each plate holds several electrodes.

The electrodes within this type of battery are immersed in water and sulfuric acid solution, which creates a chemical reaction resulting in DC voltage. It is this voltage that charges your vehicle's systems.

The enhanced flooded battery (EFB) is a higher performance version of the wet battery. The plates inside the battery are separated by a microporous divider. Attached to either side of this divider is a polyester scrim. This combination of materials stabilizes the chemical reactive agents inside the battery, giving the battery a longer life.

This type of battery is commonly used in vehicles that utilized start-stop technology. They are beginning to replace the conventional SLI batteries on the market.

The absorbent glass mat battery has a structure similar to the SLI car battery. Inside the battery, rather than have the electrolyte be a free-floating component, it is instead fastened inside its own glass fiber compartment. This battery is airtight and has zero water loss over time.

The life of this battery is three times that of an SLI battery. They work well in vehicles that have automatic start-stop systems and braking energy recovery. For this reason, they are good choices for vehicles that use a lot of energy or have more than average electrical components onboard.

Years ago, it was necessary to undo the caps of this battery and top them off with a bit of water from time to time. Thankfully, the models on the market today are maintenance-free. A self-contained system holds the water, and adding any water is not needed.

Traditional jumper cables are probably a familiar sight. For these to work, they need to be connected to the terminals of the dead battery and a live battery inside a running vehicle.

To see this brand of jumper cables on Amazon, click here.

There are also more self-contained jumper systems, which hold their own power. If you have one of these handy, you won't need another vehicle's battery to get you jump started.

How many pounds of lead in a car battery?

As a general rule, the amount of lead inside a car battery is a little more than half the total weight of the battery. All told, most car batteries carry about sixty percent of their total weight in the lead alone.

Due to their high lead content, many people will routinely "scrap" used lead batteries. Lead sells for around one dollar per pound, and reputable scrap yards pay out half of the market value. A sixty-pound battery that contains thirty-six pounds of lead would yield the scrapper an estimated $18. While lead is extremely toxic, those who choose to scrap batteries carefully can make good money. 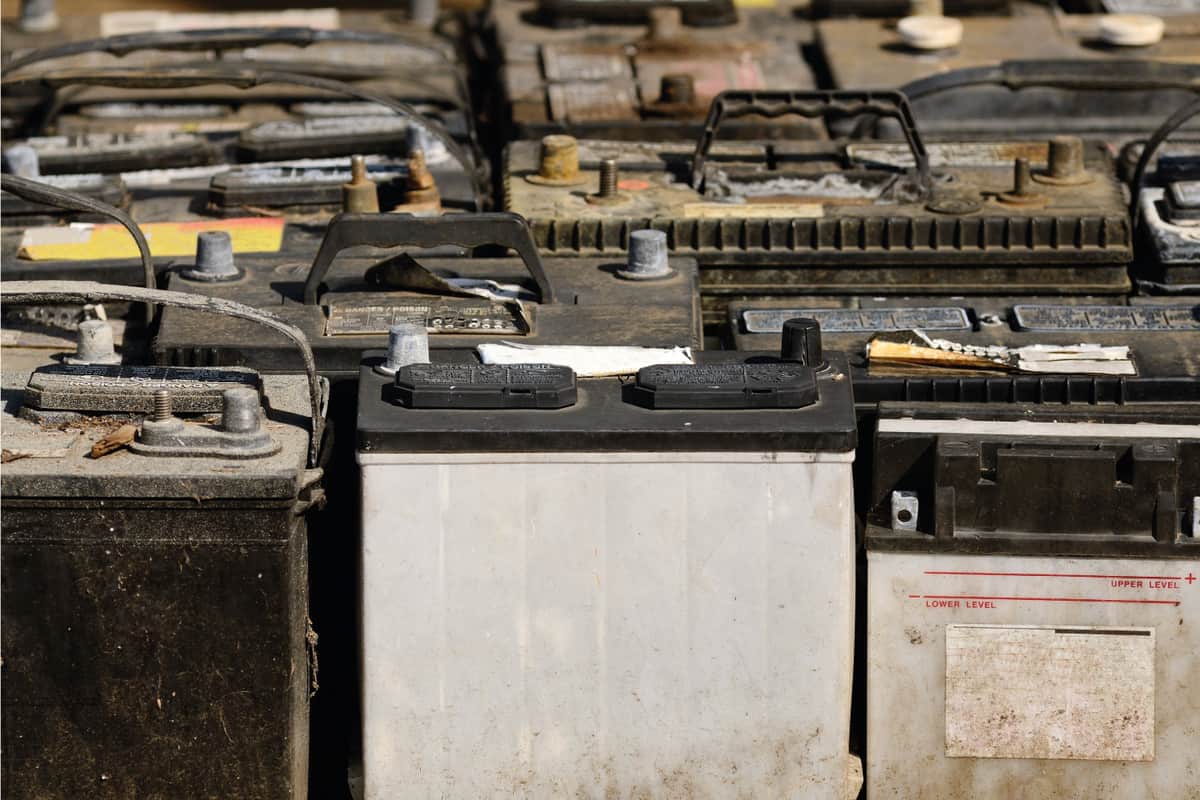 What is the weight of a lithium-ion car battery?

A lithium-ion car battery is a battery that is meant to be recharged by an independent electrical source. These batteries tend to be lighter weight than the traditional vehicle batteries, averaging between eighteen and thirty pounds. As with other vehicles, the size of the vehicle will dictate how large a battery is needed. 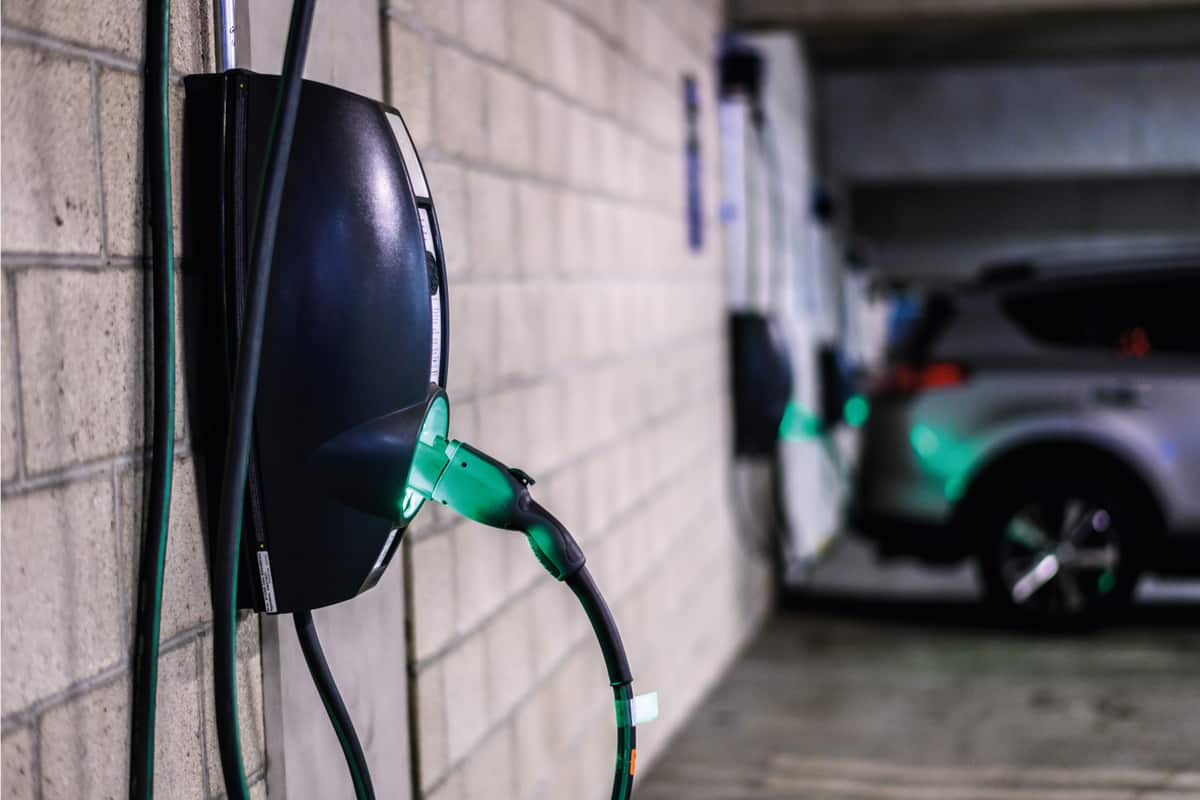 We've learned that the sizes and weights of automotive batteries will vary by brand and model. The weights range from ten pounds to sixty pounds, with starter batteries being the lightest. The more power your vehicle needs to start, the bigger and heavier the battery will be. We also learned that a car's weight is made up of a lot of lead.

If you would like to read more automotive posts, you find the following to be helpful and informative:

How Much Driving to Charge a Car Battery?

Can a Car Battery Charge Itself?

Can a Car Battery Die While Driving?