The Nissan NV has plenty of interior space and features that make it an asset for life and work. By appearance, it looks like one of the tallest cargo vans you can find on the market. Understanding that height and how it will affect the daily use of the Nissan NV is hard to visualize. We researched the height on all trims of the NV and want to explain how the cargo van will do with everyday things like housing it in a garage.

That's the basic info on the potential heights of the Nissan NV cargo van, but there's more you should know. In the remainder of this post, we will discuss which roof type is available on which trim and provide a breakdown of each trim/roof combination's height. We will also discuss what the resulting interior height is from each of the roof types. 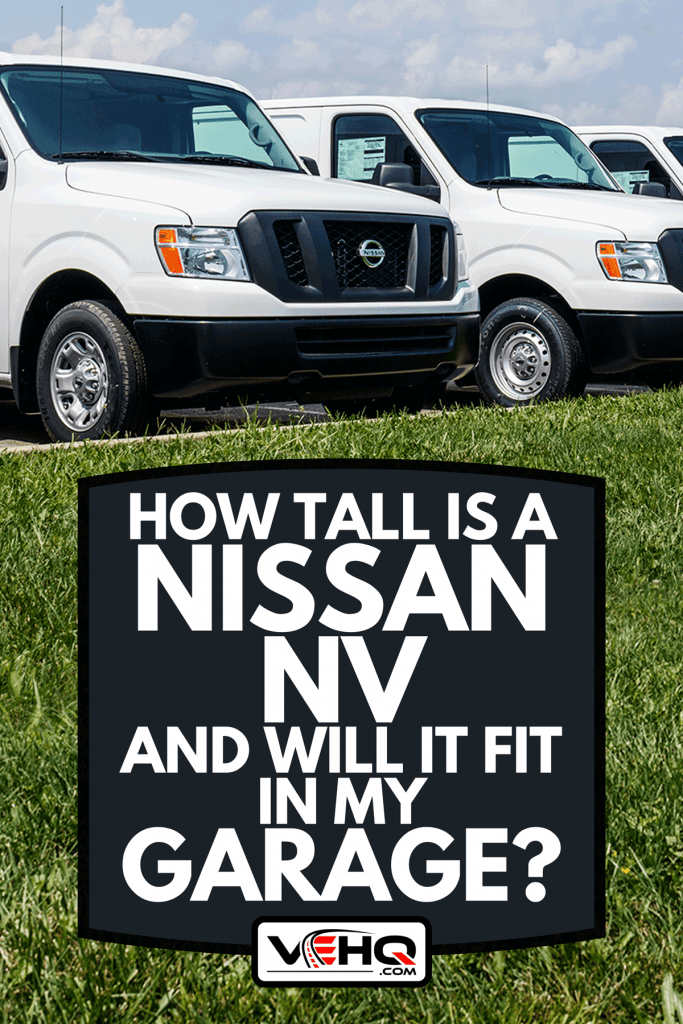 Broadly put, the Nissan NV cargo van comes in one of two different roofing styles. The choice of roofing style alone determines the total height of the vehicle. The options are either standard or high roof, and they are not available on every trim type.

Any other options that you may have when purchasing or building your own Nissan NV will not affect the overall height. For example, there are three trim levels; NV 1500, NV 2500, and Nv 3500. Each of these represents a different level of power and capability for the cargo van. That being said, these numbers have no meaning for the size or height of the vans. You will see below that both height options are available within most of the trim levels.

From tallest to shortest, here are the heights of all of the available trim and feature combinations of the Nissan NV according to their specs page:

The Nissan NV 1500 is the base model of the cargo van and the lowest of the three tiers. Consequently, it is only available with the standard roof. It is the only one of the three trim types that do not have the option of a high roof. So, all types of Nissan NV 1500 (S and SV specs) are 83.9 inches or 6.99 feet tall. To give you an idea of what that roofing height looks like, you can see it pictured above.

So, all in all, the trim difference (as in 1500 vs. 2500 vs. 3500) doesn't determine the height on the NV at all. What determines the height is the roof style option available within each of those trim levels.

Does Nissan NV fit in a garage?

Let's put the heights of the various NV models into more concrete terms by discussing if any of them can fit in a garage. S0, the average height of either a one or two-car garage is seven or eight feet tall. Residential garages of these sizes typically cause taller cars, and unfortunately, the Nissan NV is no exception.

Real problems come from the high roof version of the Nissan NV cargo van. Measuring at 8.83 feet tall, no standard residential garage will be able to house it. You'll need an industrial or custom-made garage (more common in detached garages) to stow away your high roof Nissan NV.

What is the Height in Inches of the Cargo Area in the 2020 NV Cargo High Roof?

Another helpful aspect is to discuss the interior height of one of the NV cargo vans. First, let's take a closer look at the inside of the high roof option on the NV. According to the Nissan specs page, the high roof version has 76.9 inches or 6.4 feet of maximum cargo height. That interior height is high enough for most people to stand up. The space makes moving about in the cargo area effortless compared to other vans.

In contrast, the interior maximum cargo height in the NV vans with standard sizes roofs is 55.8 inches or 4.65 feet. That's just under two feet of interior height difference between the two roof types. You may be able to fit the standard roof version into a garage, but standing up inside is impossible for most people.

Traditionally, the numbers behind vans and trucks symbolized the differences in power and payload capacity. Today, this isn't always the case, and there isn't always a considerable difference between trims. The major difference is that the NV 1500 only comes with a V6 engine, whereas the NV 2500 gives you the option to upgrade to a V8.

When comparing the 3500 to the other two trim levels, the NV 3500s are only available with a V8 engine. The 3500 marker on the NV notes a cargo van that is much more powerful than the others below. In all, there are no size differences between the trim levels that the numbers display.

The cargo van isn't the most garage-friendly after studying the garage potential of all the NV trims and roof heights. If you need a cargo van but keeping it in the garage is required, you must choose one of the standard roof models like the NV 1500. But if you can live without the option to keep the NV in a garage, the high roof models offer plenty of standing room. This room will make loading and working out of the back of your van infinitely easier.