While there is a pickup truck at a price point for everyone, there are some trucks that are just outright expensive. But which one is actually the most expensive? If you had an unlimited budget, what could you get? 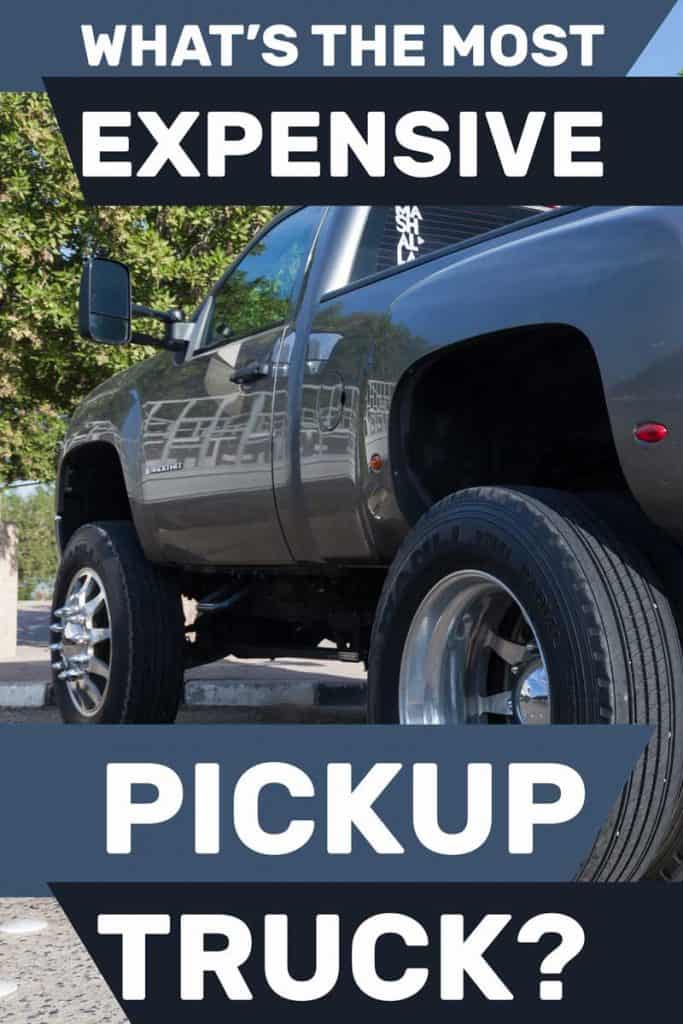 The most expensive pickup trucks typically cost between $70,000 and $85,000 depending on the make, model, trim level, and accessories. There's one notable exception - ranging around a whopping $350,000 - which we'll discuss later.

In recent years, pickup manufacturers have really stepped up their game. The vehicles that used to be strictly utility machines are now available with beautiful leather interiors and all the bells and whistles of any luxury car.

If you've been around the pickup truck world for any length of time, you're aware of the wide range of price tags on them. This is mainly due to the countless trim levels, configurations, and available features on these highly customizable vehicles. We've built and priced some of the most expensive models. Keep reading to find out which trucks are the most expensive.

Before we get into it, keep in mind that the particular trucks we're going to talk about have been uniquely outfitted by the online build tool to see what exactly trucks of this caliber sells for. In other words, these models will be the luxury, fantasy lineup.

Since we're discussing super expensive trucks, we're going to be primarily talking about duallies (Don't know what they are? Check out our post: What's a dually truck). These workhorse vehicles are inherently the most expensive on the market due to their huge, powerful engines and robust transmissions. While these trucks can pull virtually any trailer on the road, they can still be equipped with certain features that make them feel like luxury cars.

However, we'll also talk about why duallies aren't necessarily the only trucks with a reputation for raw power. Stay tuned.

The Most Expensive Trucks

We'll focus on the Ford GMC Sierra 3500, Ram 3500, and Ford F350, and we'll end with some particularly fun and interesting pickup truck options. Without further ado, let's get into it.

The most expensive GMC Sierra 3500 we were able to build is $74,880. This rig comes equipped with the powerful Duramax turbo diesel engine, heavy duty Allison transmission, and the luxurious Denali interior. For this kind of money, you can pull a massive load cross-country and it'll feel like you're sitting in a Cadillac the entire time.

This truck manages to look mean, sleek, and classy all at the same time. In fact, this truck's is almost too nice looking for a truck.

The most expensive Ram 3500 Limited we built is a whopping $85,300. This beast is equipped with the Cummins HO turbo diesel engine that puts out 1,000 pound-feet of torque, a record torque specification for diesel trucks. This translates into unmatched towing capability, but this build also maintains an upscale feeling of luxury when it comes to the leather seats and other interior amenities.

This setup is an example of a perfectly harmonious relationship between engineering prowess and luxury.

Though it won't be available until late 2020, the Rivian R1T is a highly anticipated product that will transform the pickup market once it's released. We're bringing this truck into the discussion because its release is just on the horizon, and its price tag will be close to $70,000, which means it'll be one of the priciest trucks on the market when it's released. In fact, Rivian has been taking pre-order deposits on this vehicle for some time now.

The high price is due to the fact that the Rivian R1T is completely electric, the first pickup to boast of a zero-emission power plant. As such, the R1T has insane torque specifications, higher than its competitors that operate on internal combustion engines.

This truck isn't like most electric or hybrid vehicles on the market. It's as fast as a sports car but it can tow more than virtually any pickup in its class. What's more, it can go 400 miles on a single charge.

This truck is relevant to this conversation because its upcoming release will set the bar for the next technological generation of pickups. This means the average price of trucks in the future will likely continue to increase as other manufacturers strive to match or improve upon this technology.

This truck looks like it's science fiction, but this vehicle will most assuredly be hitting the market soon. This will be the ultimate do-all truck. From off-roading to towing, this truck promises to deliver big time.

Since we're on the subject of high-dollar trucks, we figured we'd have some fun and also mention the Hennessey VelociRaptor 6x6. This truck might look like something from a movie, but it's most certainly real. In short, this is the king of all trucks. The Hennessey VelociRaptor is a Ford F150 Raptor on steroids. At a price tag of $350,000, you can buy this 6-wheeled truck capable of conquering virtually any terrain and looking awesome doing it.

The Hennessey VelociRaptor has put out a staggering 600 horsepower with its twin turbo engine. This truck also comes equipped with expensive exterior features a robust aftermarket steel bumper and a big LED light bar.

In many ways, modern pickup trucks are testaments to human technological potential. These machines empower us with the ability to do things otherwise impossible in style and comfort.

What's more, the entire pickup truck landscape is changing rapidly with the advent of electric pickup trucks. The price tags of the trucks we've discussed are high for a reason. These vehicles are impressive feats of both engineering and interior design.

We hope this article has been an informative and fun read on the most expensive pickup trucks on the market. You better start saving!

Just in case you're pondering the same question about recreational vehicles, check out our post about the most expensive RV brands too. And if you're just looking around to buy a truck, you'll probably find these posts helpful too -

How Much Does a New Pickup Truck Cost?

How much does a Chevy Silverado cost?

When's the best time to buy a pickup truck?