Toyota has put over 43 million Corollas on the road in the past 50 years. For decades, the Corolla has dominated as the best-selling car in the world. Reliable and affordable, Corollas have brought sheer pleasure to its enthusiastic drivers. Not surprisingly, the venerable vehicle has through the years built up a huge catalog of entertaining commercials. Let’s take a stroll through time and visit the rich history of the Corolla through its TV spots. 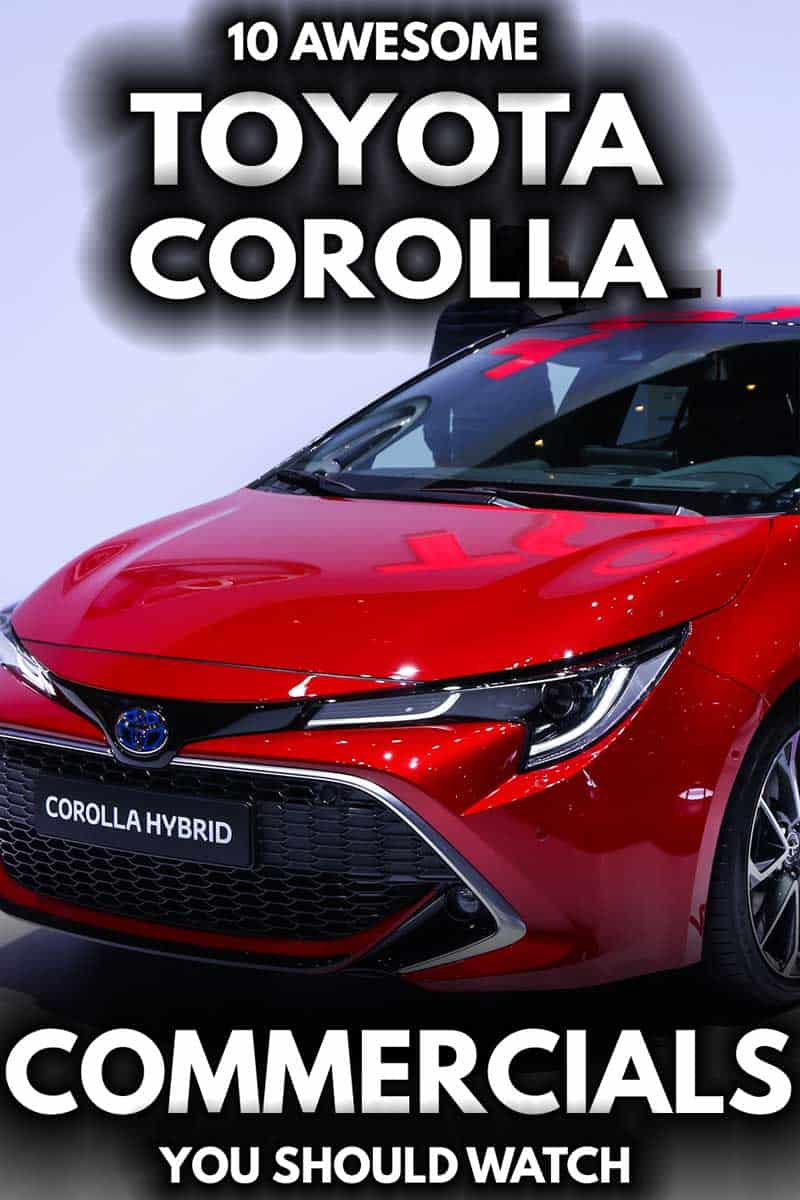 In rapid-fire succession, the viewer is whisked through five decades of the Toyota Corolla. We see the changing models of the car through the years, while each decade drips with that era’s fashion and lots of dancing and music. It opens with a black-and-white 1960s "mod" setting. Next is a 1970s funk dance number. Boomboxes and break dancing sets the beat in the 1980s. An industrial grunge motif captures the 1990s. And at last, we reach a bright, cheery 21st century featuring a lot of confetti. A voice-over puts a clever bow on the fashion theme with the tag line “Elevate your style.”

It’s a scene depicting a Comic Con-like event. We see fans dressed up as their favorite characters strolling through a movie theater parking lot. A less enthusiastic fan sees a sold-out sign and uses her Corolla’s ‘nav’ for a quick getaway.

Both the car and driver exude cool while cruising through a shimmery downtown setting, complete with some smooth-sounding R&B background music. The woman pulls off her head band and shakes out her beautiful shoulder-length locks of hair and smiles. She appears to be on top of the world. Is it the new Corolla? Her beautiful hair? Is she a model? The source of her joy is revealed when she arrives at her destination with a sign advertising “Donate Hair to Kids.” We learn she wasn’t smiling because she has great hair, but rather because she has great hair to give away.

Who needs a hug?

It almost feels like the Corolla gives you a hug in this commercial. A young man is trying to leave his home city, the amusingly named Hardtoleavetown, but everyone wants to give him a hug. The music and scenery is syrupy sweet in a really good way. Hardtoleavetown is the kind of place you want to hop in your Corolla and go visit.

The Eyes Have It

This is a sharp, minimalist ad. It opens with shots of 20-something chiseled male faces with their stubbly beards, cool sunglasses and fashion-forward suits. Clearly model types, the men move about the chic downtown environs in slow-motion with “synthy” club music setting the mood. Soon the Corolla’s reflection appears in their sunglasses. That’s obviously what has caught the male gaze, as it were, in this ad. The car’s prominence grows from shot to shot culminating with the tag line “All Eyes on Style.”

Toyota teases us with this commercial. It starts with a black-and-white shot of the 1992 Corolla. And for dramatic impact we are asked to close our eyes and imagine a new Corolla. We get glimpses of the newly designed 1993 Toyota before it’s revealed. And, we get a little surprise at the end—The Simpson’s appear. In 1993 the Simpsons were into their fifth season—representing “any family” as the narrator says.

The opening shot gets of this 1998 ad gets your attention as it’s from the vantage point of a screaming person hurtling toward Earth and a fast-approaching farm field. We hear his desperate promises to be a better person in until—thud—he lands. Seeming to have survived, he groans, looks up from the ground and sees a 1998 Toyota Corolla. Stressing the car’s reliability, the voice over says, “Too bad Toyota, doesn’t make parachutes.” This add has a second, unrelated part, which starts off explaining how the new Corolla runs quieter to dampen “annoying road noises.” That’s juxtaposed with a shot of a woman in the driver’s seat getting increasingly aggravated while her likely husband snores next to her. Finally, she brakes hard, stops the car and shoves a sock, or some small cloth, into his mouth. The screen goes black and the word “Quiet.” appears with Sly Stone’s “Everyday People” chiming in amusingly.

Beautifully shot, this commercial is like watching a ballet unfold. The dramatic music will keep you engaged while two dancers, some buildings and Corolla parts are floating, swirling and tumbling in the sky. At the crescendo the Corolla is elegantly assembled by an unknown force, and it hits the road.

When Bells and Whistles Mean Savings

Most car commercials show the vehicle cruising through a city or zipping around winding roads. But in this off-beat 30-second spot, the car just sits there, while all the action happens around it. The narrator runs through the 1991 Corolla’s features, starting with “Air Conditioning.” Snow lands on the car and the camera lens and the wintery image vibrates as we hear chattering teeth. Next is “Intermittent Wipers” and the accumulated snow on the camera lens is wiped away. “Cruise control” is portrayed by a Wild West landscape moving behind the still car. “Power Windows” is demonstrated by a tinted window rising in front of the camera with a signature power-window sound effect. The list goes on until the narrator explains the “valuable extras” can add up to a $1,000 in savings.

Toyota launched a “Greater Than” campaign in 2019 to introduce the 2020 Corolla. The idea is to share inspiring stories that capture our hearts. In this one, we see a middle-aged man leaving work—ditching the suit and tie for an 80’s hair band wig and black eyeliner. He turns up at a heavy metal concert but he’s not on stage. Rather he’s pumping his fist in the crowd to support his daughter–wig and all.

Not only has Toyota entertained us with their commercials for 50 years, but they’ve also given us a car we can depend on and drive for what seems like forever.

More about the Corolla

Love the Toyota Corolla? We do too! That's we've added these articles to the site -

What Are the Different Models of the Toyota Corolla?

Is the Toyota Corolla a Good Car?