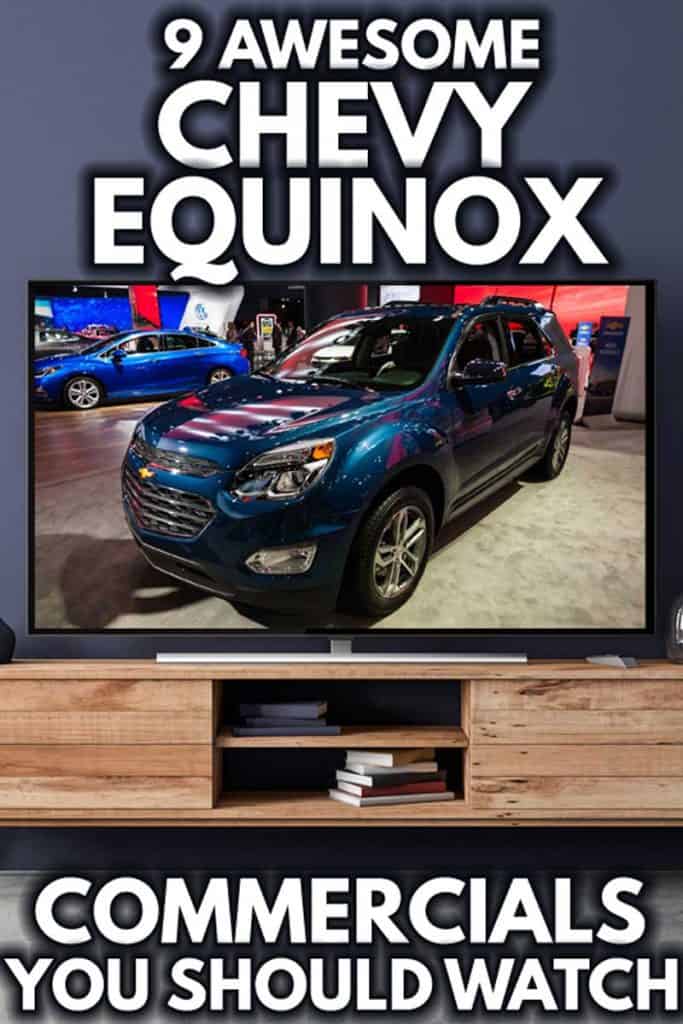 The Chevrolet Equinox! If mid-sized SUVs are your cup of tea, then this car could very well be a favorite! For real Equinox fans, we've compiled this list of commercials, sharing some fun and whimsical Chevy moments.

You can be a single adult, a married couple, or you could have a couple of kids! Regardless of the kind of family you are, or the kind of life you lead, this car will suit all your needs.

For you, we have parking assist, automatic windshield wipers, impact warning beepers, and so much more! For kids, you get a spacious backseat and a built-in entertainment system. But whether you're looking for you, or for kids, you have all these perks and more going for you when you are looking for the vehicle of your dreams! These commercials will show you how much "spunk" that this car has.

One of their commercials in the "we're surprising people by pretending that this is their car" line of advertisements, the focus of this video are some of the fun new features that the 2019 Chevrolet Equinox has! Showcasing the addition of 4G LTE Wifi, Apple Carplay compatibility, a 7-inch touch screen, and a wide variety of colors, see this gorgeous car for yourself! It makes you wonder if any of these people were disappointed to be driving their actual car off the lot once Chevy was done filming the commercial.

Your Ticket to Ride!

Ever wondered what it looks like when someone gets brought a car that isn't theirs? The reactions are pretty consistent across the board! With claims like "this seems like a luxury SUV", this specific commercial shows in a very genuine way that the Chevy Equinox is a crowd pleaser! With a gorgeous sunroof, and a three hundred and sixty-degree view around the car, visibility is an obviously important focus for this make and model of vehicle!

While there are a surprising number of amateur commercials that have been made for the Chevy Equinox, this was one of the few that brought some really helpful information to the table! Not only that, but you get to see a car commercial from what seems to be the perspective of a college student needing space to pack all his stuff, and let's be real. We all want a car that could fit all our important belongings, and this commercial will help show you just how much space the Chevy Equinox has!

Begin With the End In Mind

We've all been there. We have arms full of...something, groceries possibly, and we have to balance something VERY precariously on our knee in order to dig through a pocket or a purse for keys in order to open the car door. No longer!

This commercial highlights a keyless unlock for the car! It unlocks when you get within the proximity of the car, and as long as you and your keyfob are inside, you won't need a car to star it either! You will have the option to hook your phone up to the car's system (called MyLink) where you can do things like use your maps and text with your voice, all without having to actually use your phone!  Equipped with a plethora of sensors and cameras to ensure awareness and safety, this is a car that gets the job done, no matter what the job is.

Gator Got Your Tongue?

I remember the first time I watched this commercial. I was sitting in my living room, watching Brooklyn 99 on Hulu. Or it might have been Supernatural on CW. Either way, I was in my living room. I remember this specifically because of the alligator. The what, you ask? That's right, this commercial about cars has an actual, live, alligator in it. I remember wondering to myself how that idea got pitched, and how much I loved that someone actually took the idea seriously.

When this commercial made it's big-screen debut in 2009, it boasted 600 miles in between each fill-up, and 32 miles per gallon on the freeway. That was 10 years ago! They're obviously doing something right. You know what else they're doing right? The music for their commercials. watch this commercial and tell me honestly that you don't feel like dancing once the music starts. I dare you.

Over a Decade of Reliability!

Alright, you caught me. This commercial doesn't really say anything about "over a decade" of...well, anything. How are you supposed to know that this car really deserves that much trust?

Once you've watched the commercial, it's probably pretty clear. The car is an older model, but the filming, the filming is a dead giveaway (and if that wasn't enough of a giveaway, the year 2006 is in the title of the video). The make and model of car have been around for 13 years now, and have won a number of awards!

That's what these families are made of! Ok, these families might not really be made out of Chevy Equinox dust, but each one of these families has found that their Chevys are a reliable car, suited to a number of needs, that has stood up to the test of time. I'm willing to bet that if you try it out, you'll find the same is true for you!

Have you ever wanted to see a pyramid made out of cars? This is the commercial for you! At the time when this 2018 Chevy Equinox debuted, the inclusion of wifi, teen driver technology, Apple Carplay compatibility, and rear seat reminder, it took six other cars of various makes and models to bring all the same kinds of technology and available options to one place.

We hope you enjoyed this little collection of Chevy Equinox commercials! Share with friends if you did!