Toyota engineers have continually regarded the Continuously Variable Transmission (CVT) as a key weapon in their quest for maximum performance and fuel efficiency. Just what is a CVT, and does Toyota RAV4 series have this kind of transmission? We discuss this and much more in this detailed, well-researched post.

The Toyota RAV4 has a fuel-efficient CVT that’s a lot smoother than the typical manual or automatic transmission. Aside from the RAV4, here’s a list of other Toyota RAV4 with a standard/optional CVT transmission:

CVTs are fast becoming a new, revamped version of the standard automatic transmission. In this post, we’ll explain what a CVT is, how it works, and whether it’s reliable or not. We’ll also have a closer look at the different RAV4 in terms of specs, design, and functionality. Let’s get started, shall we? 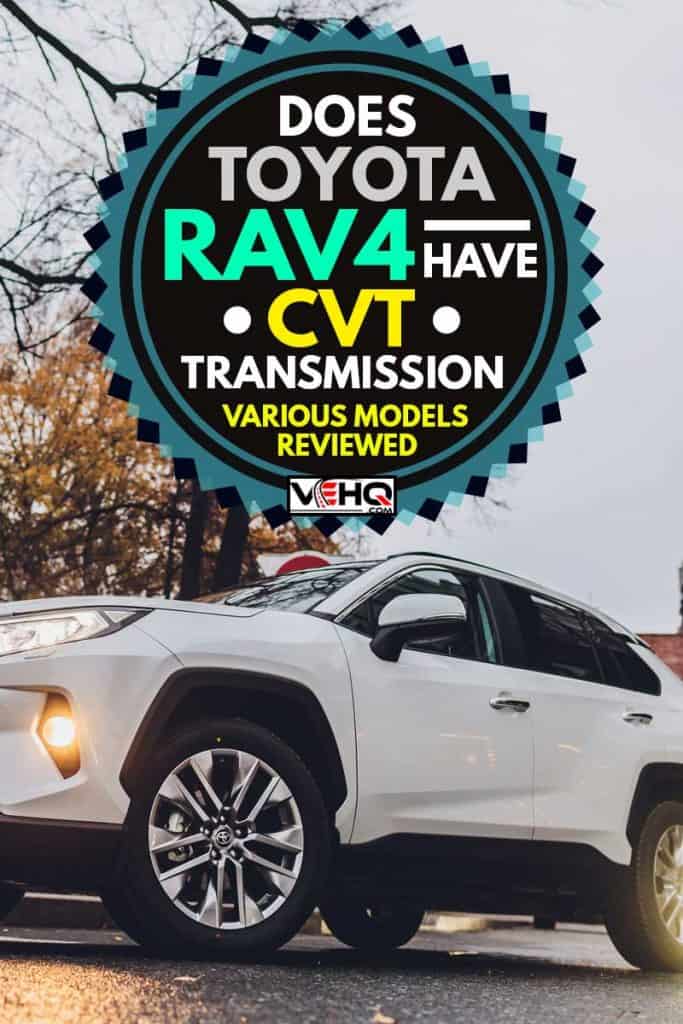 What Is Better: CVT Or AMT?

When shopping for a new car, you’ll come across those with a CVT (continuously variable transmission) and others with the conventional AMT (automated manual transmission). Since the choice of transmission matters a great deal, you need to find out what they are before making your final decision.

CVTs are built without gears; instead, they’re operated using two pulleys in a cone shape. One pulley is linked to the other transmissions in the car, while the other is fixed to the engine. The two pulleys are joined with a composite or steel belt.

They alternate widths based on the wheels and the amount of power they require from the engine. When one pulley grows bigger, the other shrinks. This innovative design allows a CVT-enabled car to shift from low to high speeds with smoothness and strength.

Here’s a video to illustrate how a CVT works:

An example of a CVT-powered car is the 2019 Toyota Corolla Hatchback. This vehicle achieves a smoother and stronger acceleration right from the start.

Otherwise known as a Semi-Automatic Transmission, an AMT is not precisely a clutch-less or automatic gearbox. Instead, it’s a manual transmission that makes it possible to switch gears without having to press the clutch. This transmission’s contraption includes the use of an electronic control unit and a hydraulic actuator system.

AMTs are kits that you can add to any standard manual transmission, thereby making them affordable alternatives for carmakers.

CVTs are generally better than AMTs. They’re fuel-efficient and provide well-programmed handling ideal for small cars and engines. While an AMT comes with two shifting gears for continuous acceleration, a CVT unit changes effortlessly through a range of gear ratios.

This makes it possible for you to control the RPM, or engine speed depending on your throttle action.

Toyota is, by far, the brand that manufactures the highest number of cars with a track-record for CVT longevity. Almost all the newer Toyota models come with more impressive transmission performance than its predecessors.

The 2019 Toyota Corolla is rated by the Automobile Protection Association as an authentic vehicle with a good resale value with low projected costs. A lot of this has to do with its well-designed CVT that provides the best gear ratio for performance or economy at any given time.

CVTs manufactured by Toyota’s closest competitors - Nissan and Honda – are great, but they’re not as durable and reliable. Once they go out, you have two options: one, part with several thousand dollars, and for a full replacement or two, sell it out for significantly low returns.

For a quality CVT, invest in a Toyota RAV4 or other models in the Toyota series.

They’re the most reliable transmissions you’ll ever find in any car out there. Toyota CVTs set the pace in terms of high-driving performance and fuel efficiency.

Due to the CVT’s potential to moderately shift its gear ratio in minimal increments, it is easier to change direction or speed while on the road. Also, acceleration/deceleration is generally smoother, and there’s a consistent rate of fuel consumption.

Some CVTs like the K210 belt-type are designed with an addition of an electric oil pump to facilitate the Intelligent Idling Stop System. This kind of transmission is prevalent in Toyota models in the 1.5 to 1.8 class.

While driving, you’ll hardly feel the shifting of gears under the hood when you slow down or speed up. Toyota CVTs can detect the car’s optimum rotations per minute and fine-tune the gear per ratio to the point that the engine hums along to the driving speed. 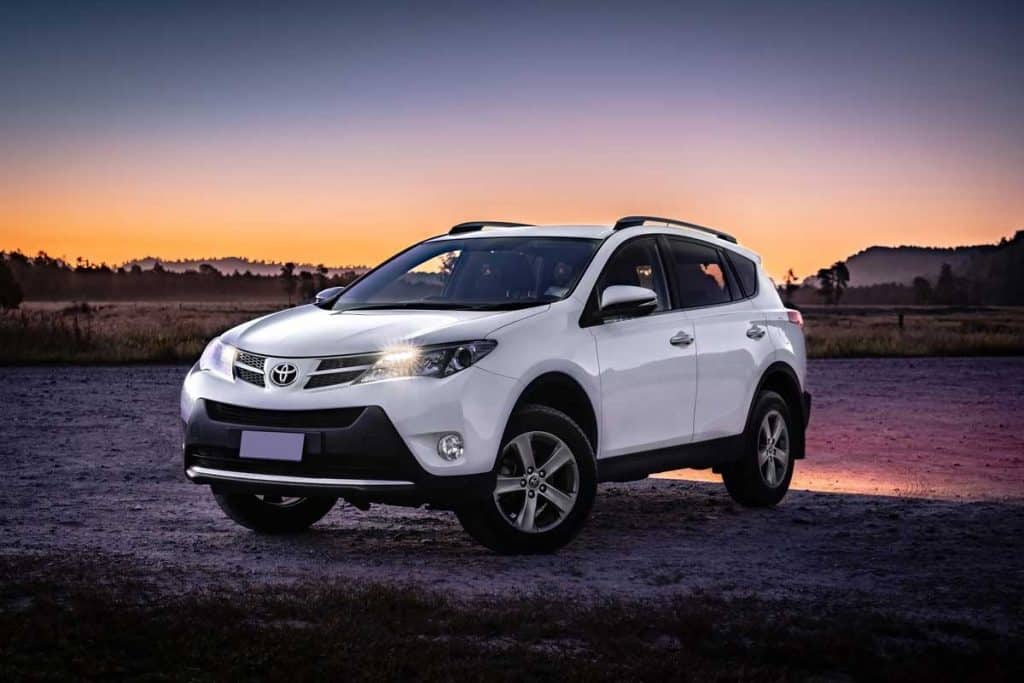 When buying a vehicle from Toyota, you can be sure that you’ll get the most out of your money. They come with excellent features, one of them being long-lasting CVT transmissions. How long they last will depend on the model from the collection. Generally, first-generation Toyota models are fitted with transmissions that aren’t long-lasting.

New-generation models can last up to 100,000 miles or more, depending on your driving speed. Here are the latest RAV4 models from Toyota that feature pretty impressive CVT longevities:

The RAV4 Hybrid from Toyota oozes class and sophistication in every sense. The RAV4 rides on a 2.5-liter four-cylinder engine that works closely with double electric motors.

When combined, the two powerhouses release a whopping 219 horsepower. The RAV4 Hybrid can snap to 60-mph in just 7.4 seconds! Overall, the ride is pretty comfy, and the handling is efficient.

Like the LE Hybrid, this model from Toyota is equally stylish. The XSE Hybrid sports black accents everywhere around the exterior, from the rocker panels to the fender arches. The 18-inch wheels accentuate the look and give it a lot more presence than the average SUV. The interior features plenty of headroom and legroom with a tall drivetrain hump at the back.

How Much Does It Cost To Replace A CVT Belt?

CVTs are precision pieces of machinery with complicated electronic valve bodies. As expected, a new replacement can cost anywhere between $4,000 and $7,000.

It would be best if you took note that CVTs are not exactly serviceable. This means that sometimes, you may have to replace the unit as a whole, rather than the belt alone. CVT manufacturers often advise their customers that once the CVT casing is opened, it loses its functionality.

Also, it’s not always the belt that is the leading cause of a CVT breakdown. Be sure to consult your mechanic before making any hefty transactions towards this, or any cause.

My mechanic, I have been taking my cars to him for over 20 years, has advised me to stay clear of any used vehicle with a CVT transmission. No matter what make or model. Recently Nissan announced they were moving away from the CVT model as they have had too many issues with them. Also other manufacturers have added years and miles to their warranties of current customers to take in account the issues they may encounter with these new transmissions. Possibly to avoid a class action??

Obviously a biased opinion. Honda's cvt 's have proven to be less trouble than the rest but none match the life and durability of regular automatic transmission. Have driven many automatic and standard shifts well past 300000 miles. Don't think there is a cvt anywhere that achieved 300000 miles