If you are in the market for a used heavy-duty Ford pickup truck, you have probably wondered just how long you can expect the V10 engine to last. That’s because Ford installed this engine as part of its modular engine lineup from 1999 to 2010 in its Super Duty trucks. What’s more, most of these trucks are priced much lower than a comparable diesel truck. 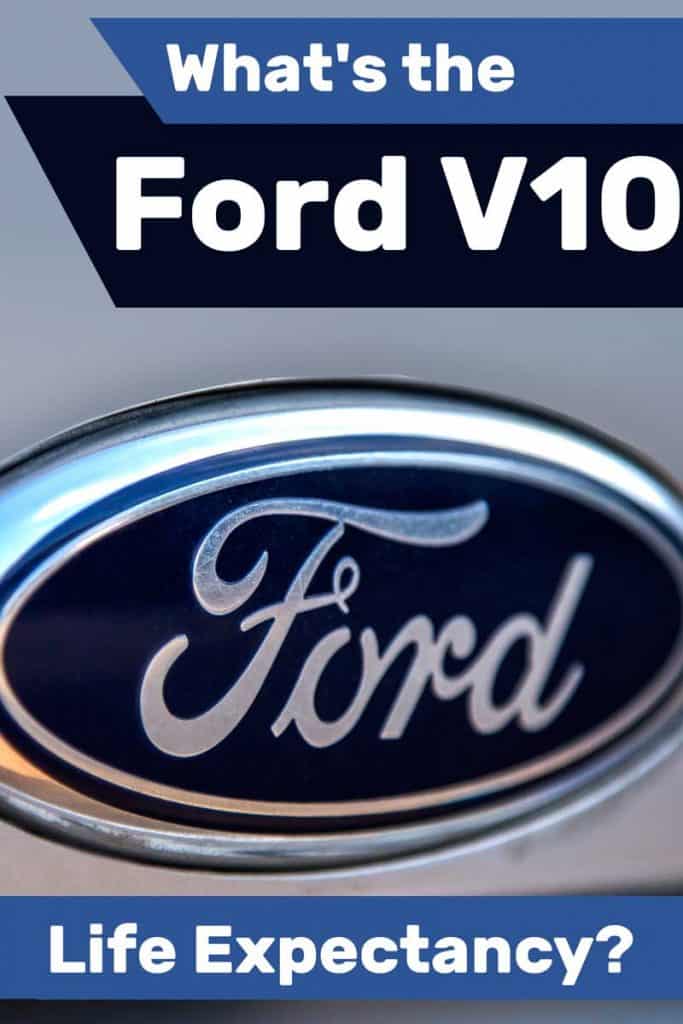 But is it worth the investment, or will you better off ponying up for the diesel equivalent? To help you find out, we have researched everything there is to know about the Ford V10, so you can know just how many miles you can expect to get out of it.

In short, what we found is that the Ford V10 has a stellar reputation for reliability. Assuming the engine has been well cared for throughout its life, you can expect it to last at least 200,000 miles before needing to perform any major repairs. That means the big V10 shouldn’t scare you away, unless 10 mpg on a good day frightens you, that is.

But there is a lot more to consider when it comes to the Ford V10 engine. Is it the right engine for you, or should you stick to the diesels and V8s you’re used to? Keep reading as we discuss the ins and outs of this big, unusual powerplant.

What is the Ford V10 All About?

First introduced for the 1997 model year, the Ford V10 was initially used in E-series vans and the motorhomes based off of them. To create this engine, Ford simply added two cylinders to the modular, 5.4-liter V8 that was introduced at the same time.

The flexible modular engine family had already been around since 1991, so by this point, we can assume that Ford knew the ins and outs of this powerplant. Other engines in this line include the 4.6-, 5.0- and 5.4-liter V8s

In 2005, a new version of the V10 was introduced. Using 3 valves, the new and improved V10 saw a power bump and was installed in a new family of vehicles. Making a maximum of 365 horsepower and 460 lb-ft of torque, this engine was strong enough to be used in the F750 as well as the Blue Bird school bus.

We know that, as part of the Ford modular engine family, the V10 has some solid engineering roots. And the fact that Ford decided to use this engine in so many different industrial-strength vehicles should tell us something about its durability. After all, commercial buyers won’t put up with weak or fidgety engines in the vehicles they use to make a living.

After checking out the common issues and owner reports on various Ford forums, it appears that the V10 is a very reliable engine as well. In fact, it is quite hard to find anyone voicing any major concerns about the robustness of their Ford V10.

So How Many Miles Can You Expect from a V10?

It can be hard to determine just how long an engine will last you. There is no registry of engines and their lifespans, so all we can really go off are owner and mechanic reports of their experiences with the V10. Sure, it’s not an exact science, but this method usually works pretty well. Owners are often quick to warn others when they have had bad experiences with a certain vehicle or engine.

Checking the various Ford truck forums online, there are countless reports of problem-free V10 experiences, as well as engines lasting well over 200,000 miles. One owner even reports having 439,000 miles on their V10, with very few problems along the way. That’s diesel engine territory!

If you have a well-maintained V10 in your possession, I see no reason you shouldn’t expect at least 200,000 miles out of it, as long as you continue caring for it by the book. That means regular oil changes and everything else as prescribed in your owner’s manual – fuel filters, transmission fluid, everything.

A Warning About Longevity Numbers

As we discuss the life expectancy of this engine, keep in mind that no two used vehicles are the same. Owners treat their vehicles very differently, from the levels of use and abuse to the maintenance schedule. A high-mileage engine that has been maintained religiously could very well serve you better and for longer than a lower-mileage truck with a poor maintenance history.

That means there is no one solid answer to the question of how long the Ford V10 engine lasts. Still, all trucks are not created equal. Some are just more reliable than others.

Other Issues with the V10

Okay, so these engines can last a long time, but will there be tons of little issues along the way? According to most owners, the answer is “no.” In fact, aside from a couple of minor repairs, very few V10 owners have had to deal with anything but routine maintenance. Still, let’s go over some of the concerns with the Ford V10.

Okay, no one expects to get Prius-like mileage out of their pickups, especially heavy duty ones. But the Ford V10 has a reputation for getting even worse mileage than just about anything else out there. Compared to diesel trucks, the V10 sucks down fuel like it’s going out of style.

Checking out owner-reported fuel economy on fuelly.com, most of these trucks are averaging between 8 and 10 mpg. That’s low, but what can you expect from the diesel engines? After all, these are big, heavy trucks that are more often than not towing and hauling huge loads.

Well, according to the (much more numerous) owner reports, pretty much all of the diesel engines, including the venerable 7.3-liter, get 3 to 6 more miles per gallon than the V10. That’s a huge difference when we are talking about fuel economy numbers this low.

One of the most common complaints about the V10 is a rough idle. For anyone who has experienced this issue, it sure can be annoying. The good news is that the fix is often a simple and cheap one.

If you happen to find an otherwise great V10-engined truck that suffers from this issue, first check the PCV hose. Often, these hoses will develop a crack over time that leads to the rough idle. And there are plenty of videos online showing you how to fix this issue yourself.

Other than the idle, the other main concern regarding Ford V10 reliability is the exhaust system. Many owners report that their manifold studs rust out and fail, leading to an exhaust leak. You can easily find repair kits [Amazon link] online for less than $30 that should remedy the problem.

Clearly, you would rather have an issue with a relatively inexpensive exhaust than an engine. Still, this is something to have checked on your vehicle before purchasing, just so you know what to expect down the road.

And since we mentioned repair kits, it’s worth mentioning this one, a favorite with Ford fans –

Advantages of the V10

Just as there are downsides to this engine, there are also some positive things to consider.

Perhaps because of the poor fuel economy, or maybe it’s because people don’t know how reliable these engines are, but V10 Fords sell for thousands less than diesel pickups. And because many shoppers will only consider a diesel, they are relatively easy to find on the used market.

We haven’t really talked about this yet, but V10s are cool! How many vehicles do you know of that use this type of engine? Most are supercars like the Dodge Viper, Audi R8 or the Lamborghini Huracan. So that puts you in some pretty cool company as you tool around in your heavy-duty pickup!

Now that we know all about how amazingly reliable the V10 is, I hope that you know everything you need about making this purchase. According to all of my research, there is really no reason not to go for it. That is, unless the rather appalling gas mileage figures scare you away.

But that really is the only major concern with these engines, and I suspect anyone shopping for a V10-powered, heavy-duty truck isn’t too terribly concerned with fuel economy in the first place.

How To Wash Motorcycle Gloves? [3 Steps]

Does the Nissan Frontier have apple carplay?

Does the Nissan Titan have Apple CarPlay?

Is the Honda Ridgeline a 4WD?

Can You Flat Tow a GMC Sierra?

Does the Chevy Colorado Have a Sunroof?