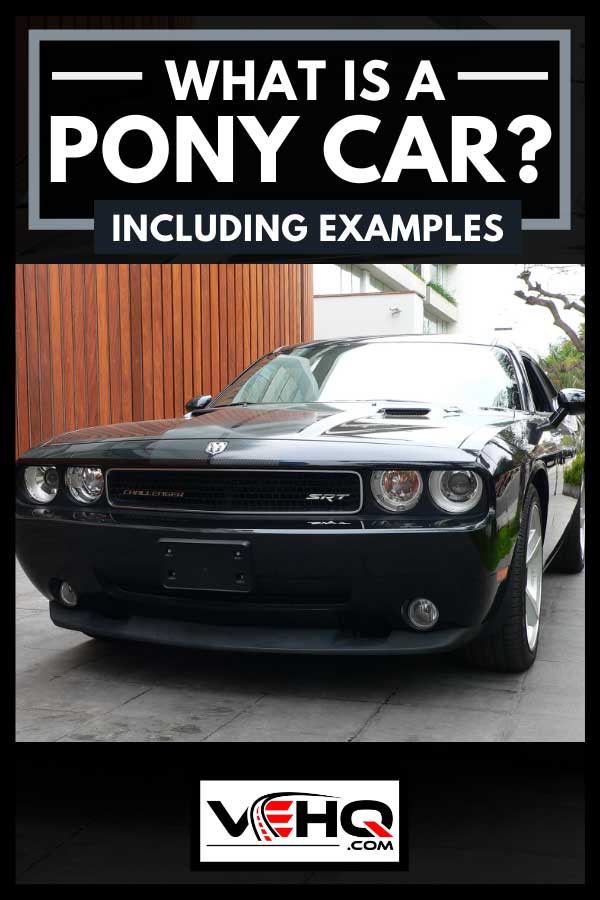 While most people have no problem distinguishing a sports car from a muscle car, it's a bit trickier to define a pony car nowadays. Heck, for some of our younger readers, this may be the first time you've ever heard the term "pony car." To help clear up this confusion, we've put together this brief article exploring the pony car's design and history.

The term "pony car" is used to describe a compact, sports-like car that was first popularized by the 1965 Ford Mustang. A few defining features of a pony car include an extended hood, a short rear deck, and either a small-block eight-cylinder or a six-cylinder engine. The most famous pony cars still around today include:

For more information on the pony car, we encourage you to read the info below. In this post, we'll go over precisely what a pony car is and why it's easy to confuse this model with muscle cars.

What Is The Pony Car?

In this first section, we'll give you a brief overview of how the pony car label emerged in the mid-1960s. We'll also share the names of some of America's most iconic pony car designs.

A Brief History Of The Pony Car

It's impossible to explain what a pony car is without talking about the 1965 Ford Mustang. Indeed, the entire pony car class owes its existence to the success of this incredibly influential car model.

Our story begins in 1960s America. As the Baby Boomer generation approached legal driving age, Ford executives began thinking of ways to capitalize on this youthful demographic. Manufacturers wanted to create a vehicle that had all the cachet of the Thunderbird for a more affordable price. The result of this brainstorming led to the 1965 Ford Mustang, which was released as both a coupé and convertible.

Young drivers were immediately blown away by the Mustang's slick design, sporty feel, and relatively low price (around $2,300). Sales of the 1965 Mustang climbed to over 600,000, making it one of the most lucrative models in Ford's history.

As you could imagine, other car companies quickly took note of Ford's money-making Mustang. Within just two years, every major car manufacturer had its rendition of the Mustang. In honor of Ford's iconic model, critics quickly lumped all of these cars into the "pony class" category.

Defining Features Of A Pony Car

Now that you know a little bit about where the pony car comes from, you're probably wondering what it looks like. Here are the most significant features that put the pony car in a separate class:

For a better understanding of how the pony car stacks up against other car models, we encourage you to read through the previous VEHQ post entitled, "How Wide Is The Average Car?"

What Are Some Examples Of Pony Cars?

The Ford Mustang will always remain the pony car design. That's understandable, of course, considering there would be no such thing as a "pony car" without it!

There are, however, many other designs that helped popularize the pony car model. Here are a few of the most famous names:

Of all these iconic pony car brands, only the Dodge Challenger, Ford Mustang, and Chevy Camaro are manufactured to this day.

A Few FAQs On The Pony Car

Before we close this post, let's run through two of the most commonly asked questions surrounding the pony car genre. Below, we'll help you understand the distinctions of pony vs. muscle cars and explain how to pick your perfect pony car.

What's The Difference Between A Pony Car And A Muscle Car?

One hot debate in the car enthusiast community is whether to keep the pony vs. muscle car distinction. Critics claim the "pony car" label is a bit outdated, especially as newer Mustang or Camaro models drift into either the sports or muscle car categories. On the other side, some enthusiasts believe the differences between pony and muscle cars are significant enough to warrant the use of these two terms.

So, while there's no consensus on the pony vs. muscle car split, here are a few of the traditional distinctions made between these car models:

To help you see what we're talking about, here are a few of the most prominent muscle car models:

FYI: please read through VEHQ's article on car skidding to protect yourself in these ultra-fast vehicles.

What Are The Best Pony Cars?

When it comes to choosing the best pony car, you need to consider the style of car that fits your preferences. Remember, one of the defining features of a pony car is that it's easy to customize. So, no matter what model you choose, you shouldn't have a difficult time upgrading your vehicle to your specifications.

The best way to find out what pony car is best for you is to review the information on each manufacturer's website. Here are the official links to the three most popular pony cars:

Although the lines between sports, pony, and muscle cars are becoming increasingly blurred, these distinctions hold great importance to those interested in historic car models. Hopefully, the info above has helped you understand why the term "pony car" was invented and how to use it properly.