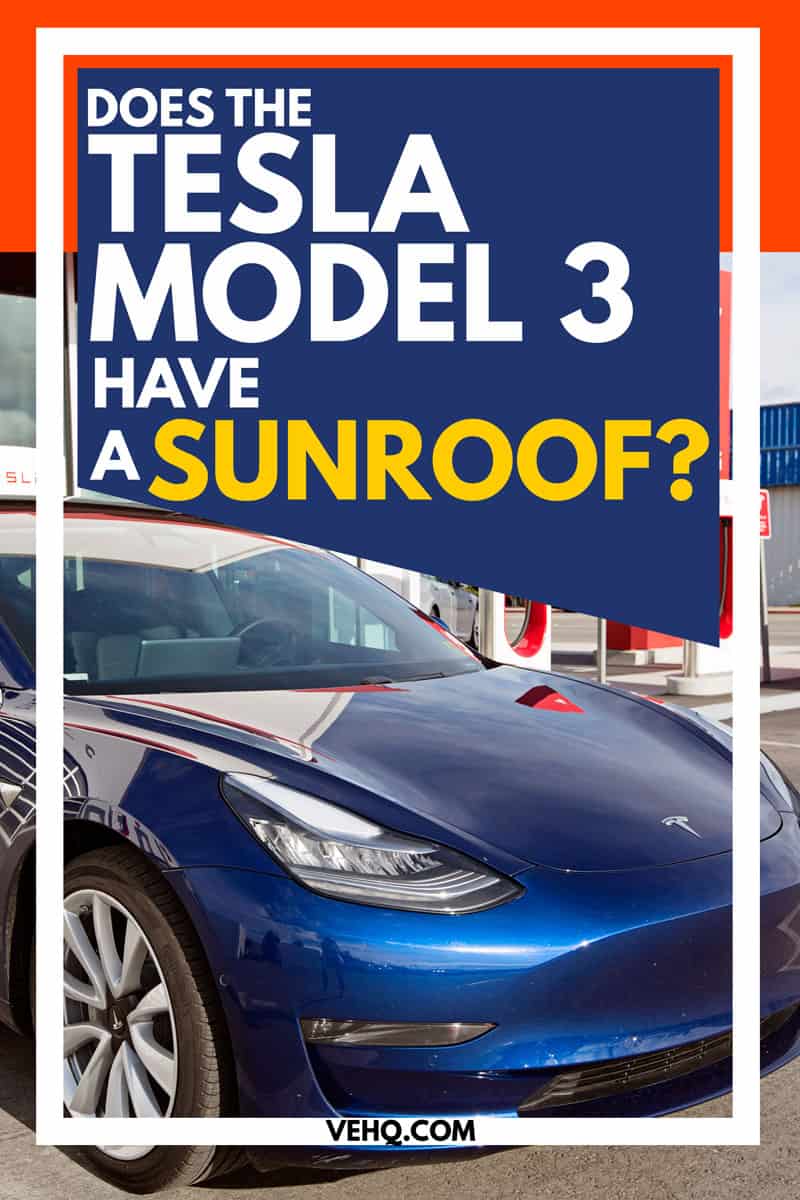 The Tesla Model 3 was long-awaited and highly anticipated. Elon Musk, Tesla’s CEO, promised the world he would deliver an affordable all-electric car. Musk fulfilled this promise, providing a stylish EV at a lower price point. One of the exterior features of the Model 3 is the glass roof that stretches from the middle of the roof to the beginning of the trunk. The roof provides an open, airy, and bright interior. But, it's a roof that does not open. That got us thinking about sunroof options.  Does the Model 3 have a sunroof?

When the initial list of Model 3 features was released in 2017, a sunroof or panoramic sunroof wasn’t on the list. And when the first Model 3 was released to the market, a sunroof was not an option. And still today, there isn’t an optional package that includes a sunroof. Tesla’s Model 3 does not come with a sunroof, nor is there an option for a sunroof.

The unique and stylish glass roof on the Model 3 allows ample light to filter through the car. Some people like sunroofs though—maybe it’s feeling the cool breeze, the heat from direct sun or twinkling stars in the night's sky. Read on as we dig in and explain more on why the Model 3 doesn’t have a sunroof.

Standard on a Model 3 is a glass roof that is tinted, providing ultraviolet and infrared protection. There were high expectations for Tesla’s affordable Model 3. The configuration options of this model were less than that with some of the other cars in Tesla’s fleet. And the current exterior design doesn’t seem to allow for a sunroof. Tesla always surprises the market with its innovations, but it doesn’t seem even to be hinting about the possibility of a sunroof. In fact, as of 2018, the Model S no longer has a panoramic sunroof.

Does The Tesla Model 3 Have a Moonroof?

We’ve established that Model 3 doesn’t have a sunroof, but we didn’t discuss a moonroof. And though the terms are often used interchangeably, they are different. A sunroof is usually a solid metal panel that can tilt up or be removed. A moonroof is defined as a transparent non-removable panel.

Does The Tesla Model 3 Glass Roof Heat Up?

All car roofs heat up. The Model 3 glass does heat up but probably a lot less than a metal roof on a standard car. Tesla has an engineering team that works just on glass—they are tasked to utilize the latest and greatest in technology.

The expansive glass roofs have a UV-reflective layer designed to reflect light and the heat that comes with it. The glass roof on the Model 3 is tinted, which also filters light and helps keep the car cool.

It’s in the best interest of an all-electric car to stay cool. If it heats up and the A/C has to work hard to cool it down, that’s a drain on the battery.

Like all roofs, the Model 3 will heat up, but all that technology will keep you from noticing.

Why Do Tesla Roofs Turn Orange?

It’s been observed that the glass roofs on Tesla’s sometimes “turn orange.” This phenomenon seems to occur when water accumulates from rain or morning dew, even from snow or after a drive through the car wash.

Tesla’s glass roofs are composed of protective layers and coatings designed to keep the car cool inside. One of the layers has orange or red, like coloring. When water and light mix, the glass causes the light to refract. The result is an orangey-red hue. The roof doesn’t turn orange or red; it just looks like it does.

The glass used on the windshield does not experience the orange phenomenon.

Some owners think the orange look is cool.

Is a Sunroof or Moonroof Worth It?

The idea of wind blowing through your hair or the night sky filling the interior of your car as your drive sounds dreamy. People either love or hate sunroofs. There was hope for Tesla lovers that the Model 3 would have the panoramic sunroof like the Model S. And though we’ve indicated that Tesla’s no longer have sunroofs or moonroofs, we explored a few pros and cons. Perhaps this better explains why Tesla doesn't create an opening in the roof.

Tesla’s are designed for maximum efficiency. These battery vehicles are engineered to maximize their driving range. Almost no one understands aerodynamics better than the engineers at Tesla. Any reduction in drag significantly increases the mileage range that can be achieved. As we mentioned in the list of sunroof cons, weight, heat, and wind can all take a toll on the battery. Less battery juice means less mileage you will get from your Tesla.

Recently, the Model 3 was named a 2019 IIHS TOP SAFETY PICK+ by the Insurance Institute for Highway Safety (IIHS). It’s interesting to note that the strength of the Model 3’s all-glass roof was a key consideration. It’s one of the strongest, if not the most durable EV roofs that IIHS has tested.

Perhaps overall safety was a consideration for Tesla not to have an optional sunroof or moonroof on its vehicles.

Tesla Stays On The Cutting Edge of Technology

Tesla has high expectations—they want their cars to be the best in the world. They are leaders in the EV marketplace. Tesla’s are sleek, high-performing vehicles.

But maybe once you get inside a Tesla and experience the expansive glass roof, you won’t even remember that a sunroof isn’t an option.

My new 2022 model 3 has no sunroof, but I discovered today by chance that it will respond to voice commands. Speak “open sunroof” and the screen responds with “opening sunroof”. Similarly with close.

I'm a smoker, and the only reason I haven't bought a Tesla Model 3 is the lack of a sunroof option.