The doors of a car might not be one of its defining features you first think of, but the door’s design can affect the car’s price, safety, and comfort. You might not know every type of car door or have them memorized, so we wrote a guide to help you navigate the different types of car doors available.

All vehicle doors can be divided into manual or powered types, or whether you close the door yourself or push a button to do it. The materials used for different door styles will vary, but you can expect a choice between aluminum, carbon fiber, and a few types of steel. Here are the 7 main car-door styles you’ll find on the market:

In this article, we’ll take a look at what each door looks like, how it works, which models feature it, and any potential safety issues that come with the design. So be sure to keep reading. 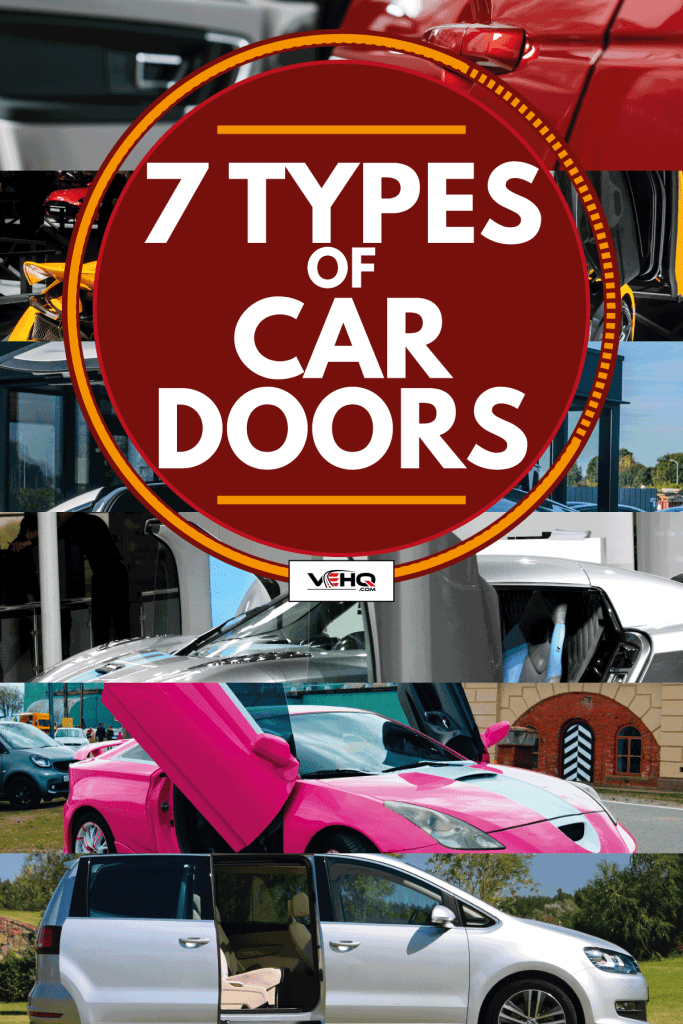 A Guide To Car Door Types

Most of these door types appear on luxury models, vintage cars, and supercars. We’ll start with the common designs and work our way down to the exotic ones. 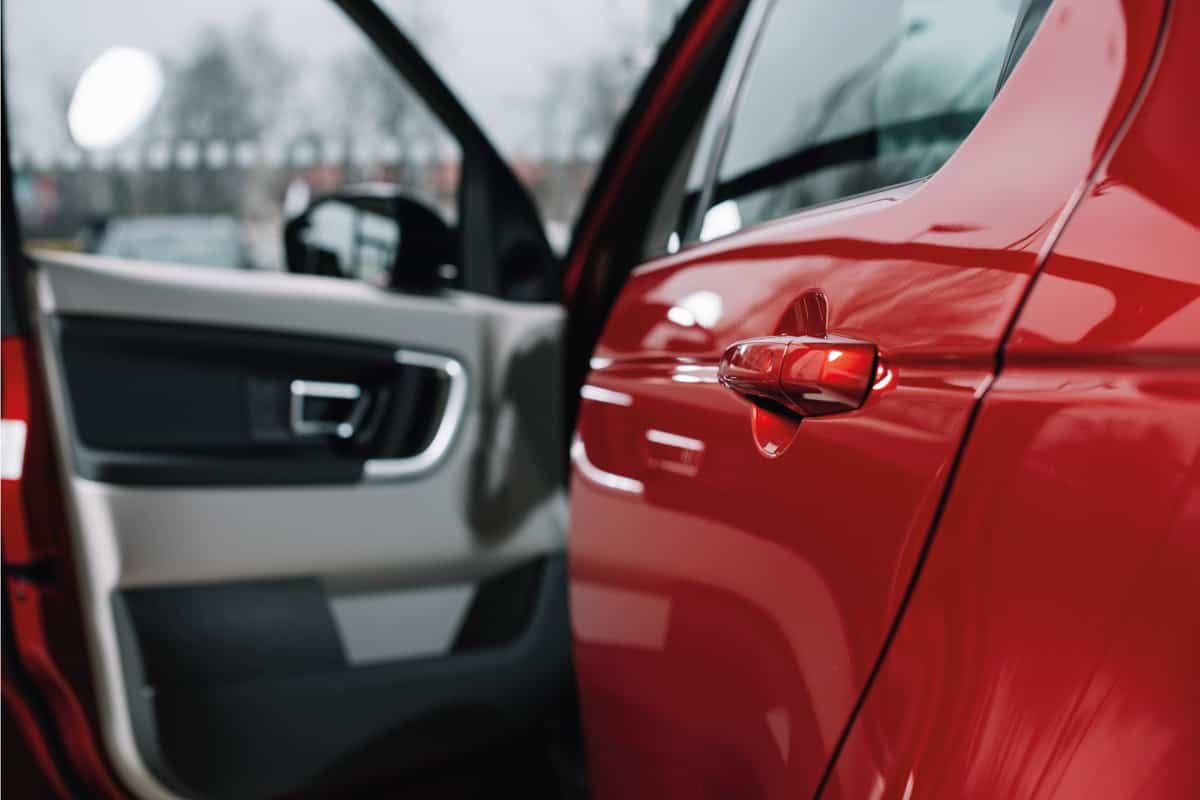 This type of car door probably comes to mind when you hear "car door." The door hinge sits on the front side of the doorframe, and the doors swing out and away from the car’s body. Conventional doors are the cheapest and easiest to make. They’re the default option for every major brand in the market.

The Discovery and Science Channel video below shows how conventional doors are manufactured:

The safety of conventional doors will vary depending on the manufacturer, year, and model of the car; each brand has its own take on the general design. You’ll have to look up the safety rating of a specific model and look for side-impact crash ratings to see how safe the doors are. If you find the conventional door of your truck (or any other vehicle) is lodged shut, take a look at our instructional steps on what to do when your vehicle doors won’t open. 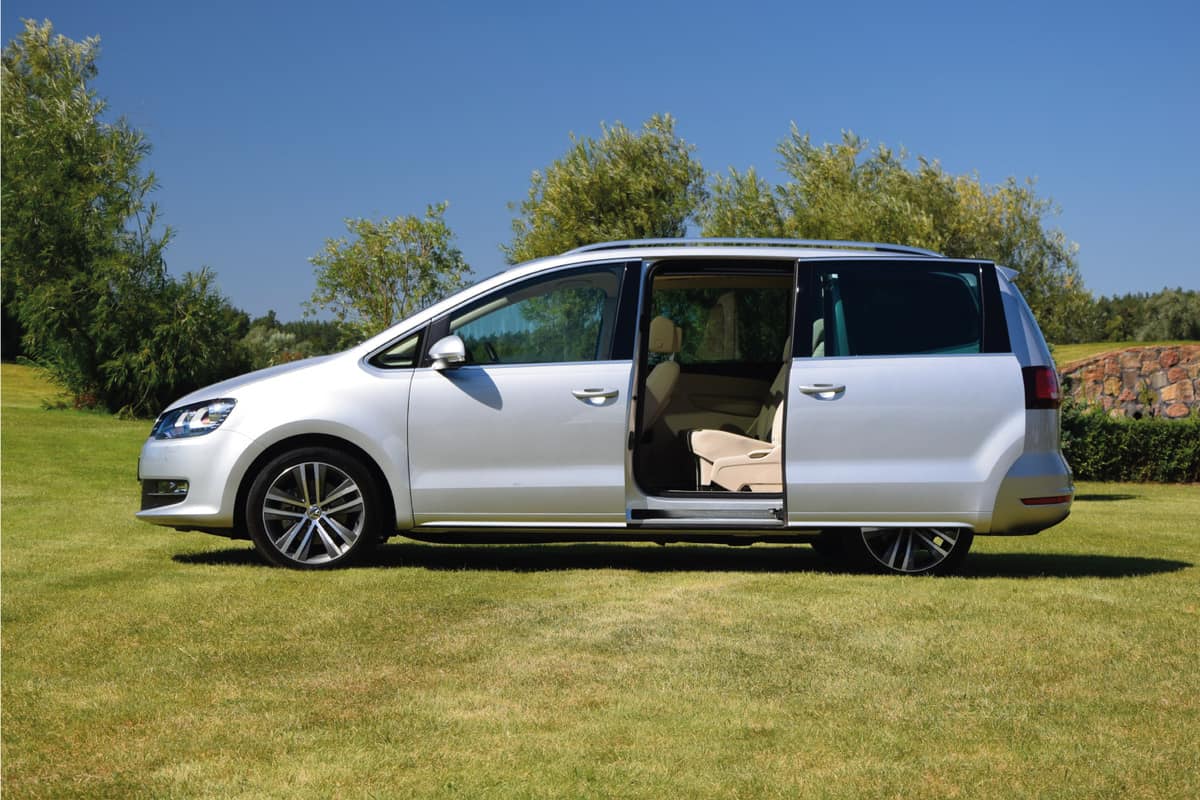 Sliding doors follow tracks mounted in the doorframe and slide away from the opening, usually toward the back of the car. They aren’t as universal as conventional ones; you’ll mostly find sliding doors on vans, luxury models, and vintage cars. The majority of modern sliding doors open at the push of a button, which can be convenient when your arms are full.

While sliding doors are common in family vans, their design creates some safety issues. The larger doorways make it difficult to add B pillars, a solid column that connects the top and bottom of the frame. It transfers the blunt force of a side-impact to the frame instead of you or fellow passengers. Each manufacturer overcomes this challenge in their own way, so you’ll have to look up the side-impact scores for specific models again. 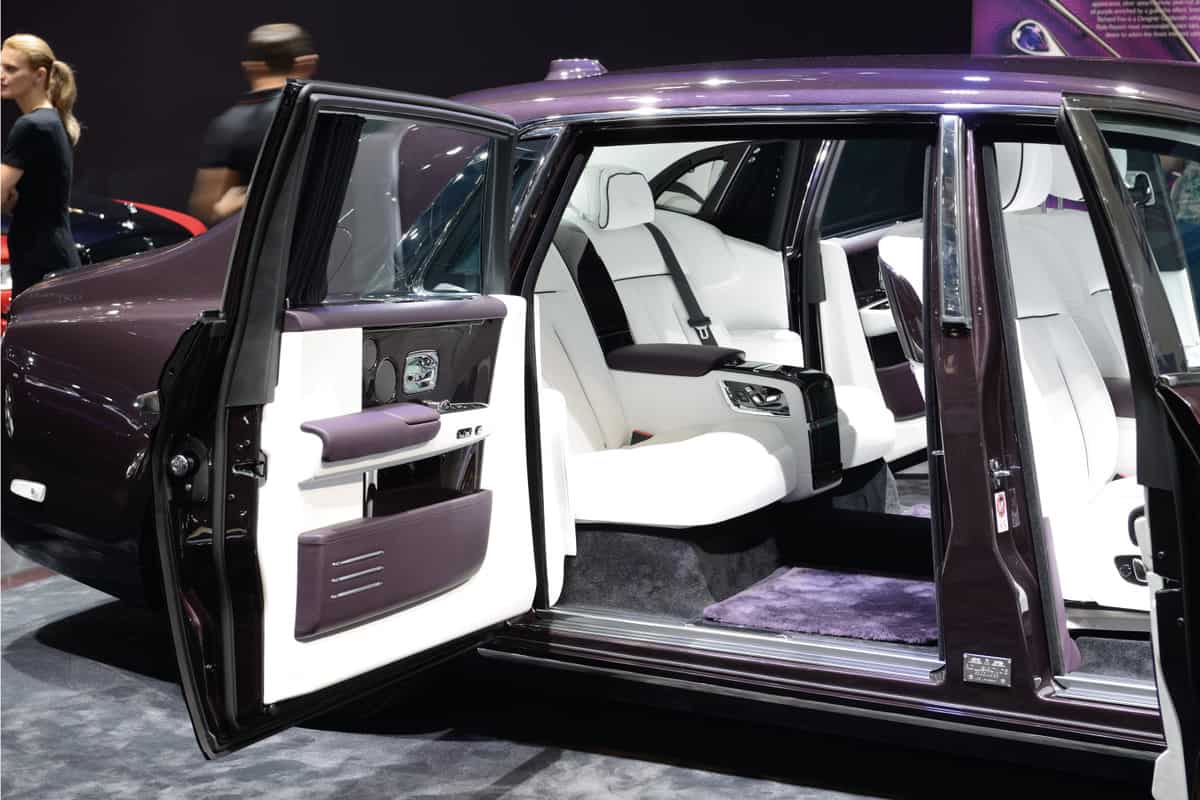 Despite the terrible name, suicide doors have stuck with the car industry for a long time. You might also know them as freestyle, coach, rear-hinge, or side-opening doors. Suicide doors are mirror opposites to conventional ones; they still swing open, but the hinges sit on the rear side of the doorway.

Modern suicide doors only appear as a set of second-row doors paired with conventional versions upfront. Their biggest perk is accessibility; climbing in and out of the vehicle is much easier with the extra foot space.

Here’s a list of some recent models with suicide doors:

The suicide door’s unfortunate name came from safety risks highlighted in the 1960s. When they didn’t latch shut tight enough, the air drag could rip the door open while moving. Seatbelts weren’t mandated at the time, so falling out was unfortunately easy. The design also made street parking dangerous; if a passing car hit the open door, it slammed shut toward the doorway and into an exposed leg or other limbs.

The risks of street parking with suicide doors haven’t disappeared, but manufacturers created safety systems to prevent the door from opening while driving. A Honda Element’s front doors fold over part of the suicide doors so they can’t accidentally open. Rolls-Royce uses automated doors so you can press a button to securely shut and latch it. Suicide doors retain their following within a niche market, similar to the subsequent doors on this list. 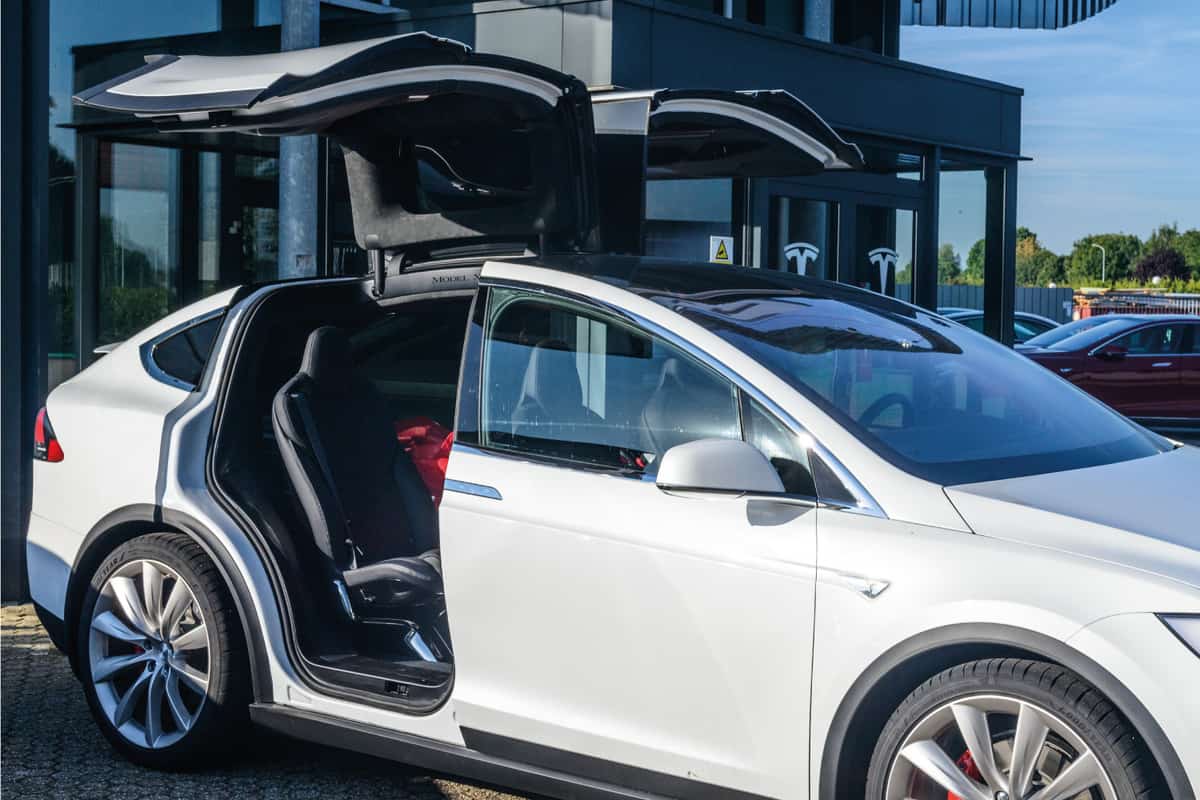 Gull-wing and falcon doors are so similar that we merged them into one category. Both use hinges mounted on the roof to open vertically instead of to the side. While the gull-wing uses a single hinge on the roof to swing out and up, the falcon door uses a second hinge to pivot and open in tighter spaces so you don’t hit an adjacent car. When the doors are fully extended, they sit above the car’s main body and look like a pair of wings, hence the name.

The most famous model with gull-wing doors would be the DeLorean DMC-12 used in “Back to the Future” as a time-travel machine. Here are some other popular models with gull-wing or falcon doors:

Gull-wing and falcon doors aren’t as common because they have a host of safety issues. Federal law requires cars to have a means of escape if the car flips, which is problematic for a door attached to the roof. The doors also need to weather side impacts without using heavy materials that make it impossible to lift or bow the roof under the weight. As a result of the design complications, these doors are rare. 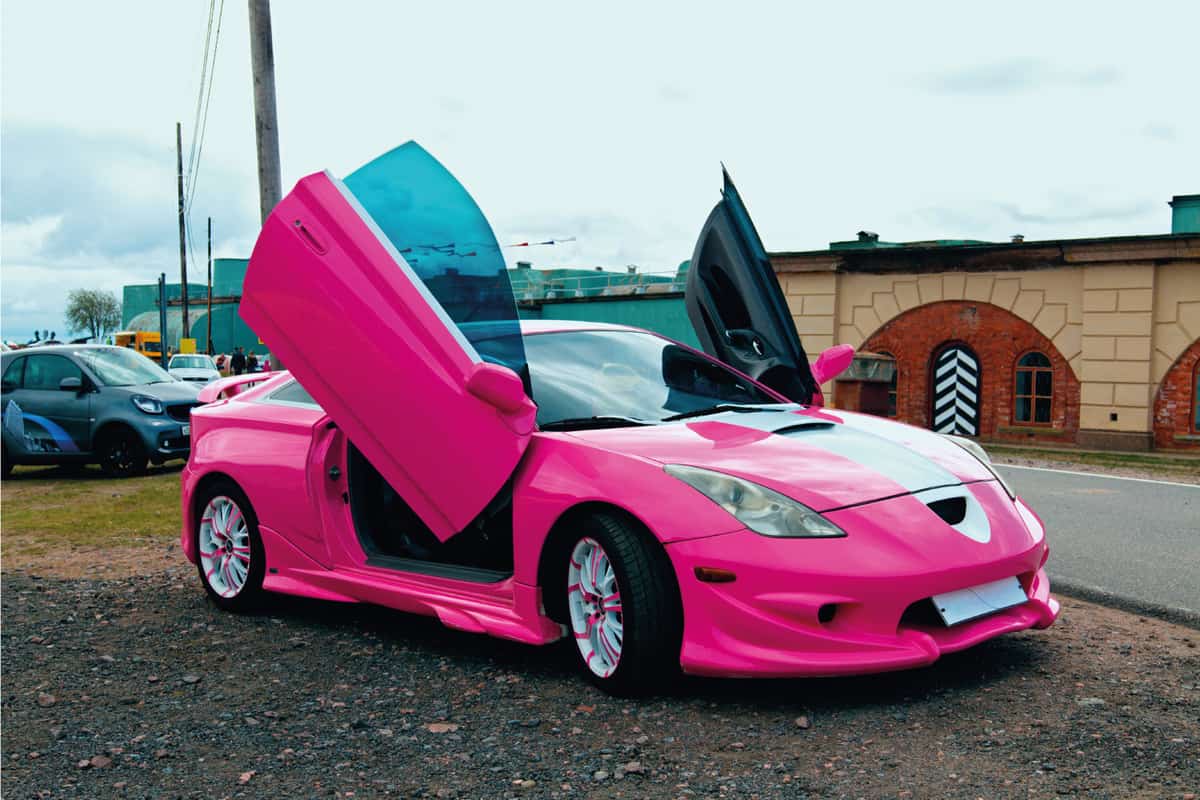 Scissor doors use hinges mounted near the doorframe’s side to rotate counterclockwise and point at the sky. They are also known as Lambo doors since they first appeared on the Lamborghini Countach and later Lamborghini models. They add flair but don’t do well in low-hanging spaces since a section of the door sits higher than the car’s body when fully opened.

Here are some classic cars with scissor doors:

Crash safety results for Lamborghini models are mysteriously missing, which calls the design’s safety into question. Like the gull-wing doors, you could have trouble escaping your car after it flips since they need space above the roof to open. 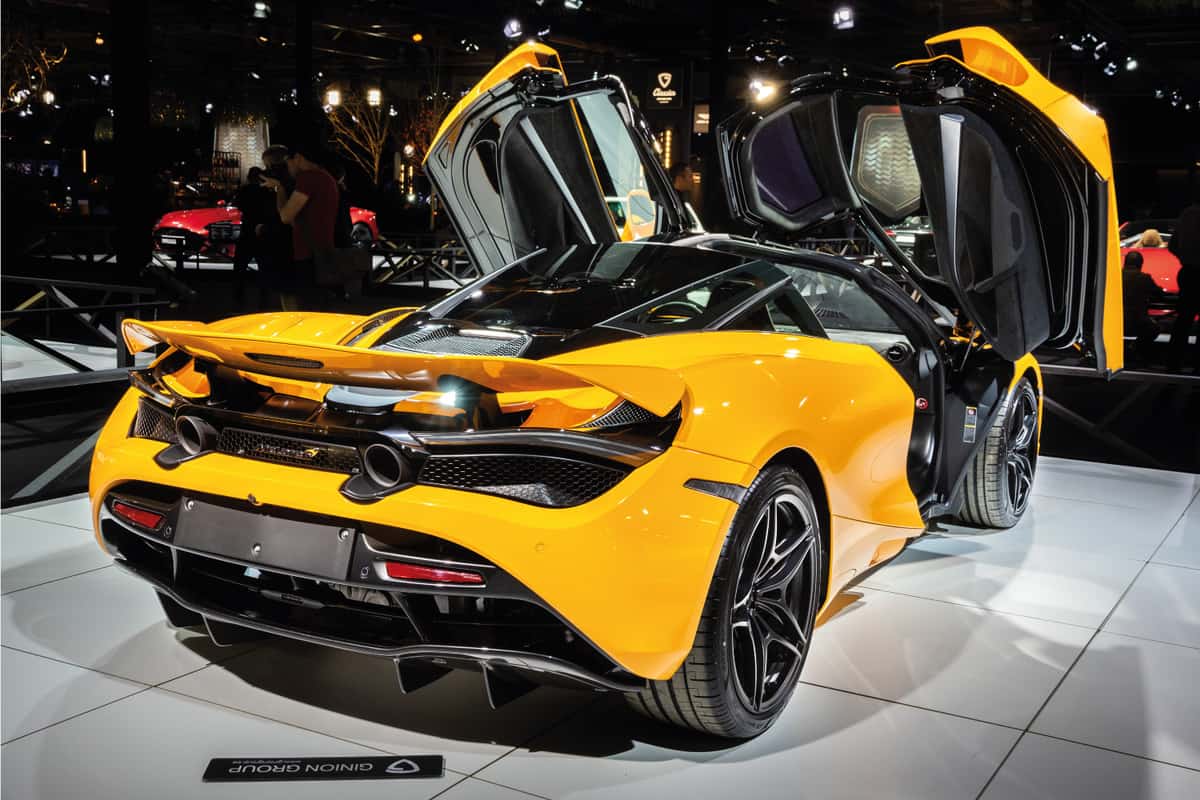 Butterfly doors are similar to scissor doors, but their lower half also extends away from the body while the top rotates toward the windshield. These doors make entering and exiting your car easier than with scissor doors, but both run into the same problem: they need extra vertical room to open. With the added horizontal angle, butterfly doors also risk hitting adjacent cars.

Here are some of the beautiful models featuring butterfly doors:

Butterfly doors lack crash-test results like the scissor doors. Since butterfly doors rotate away from the body, they theoretically offer better chances of escaping an overturned car. But we wouldn’t bet on it. 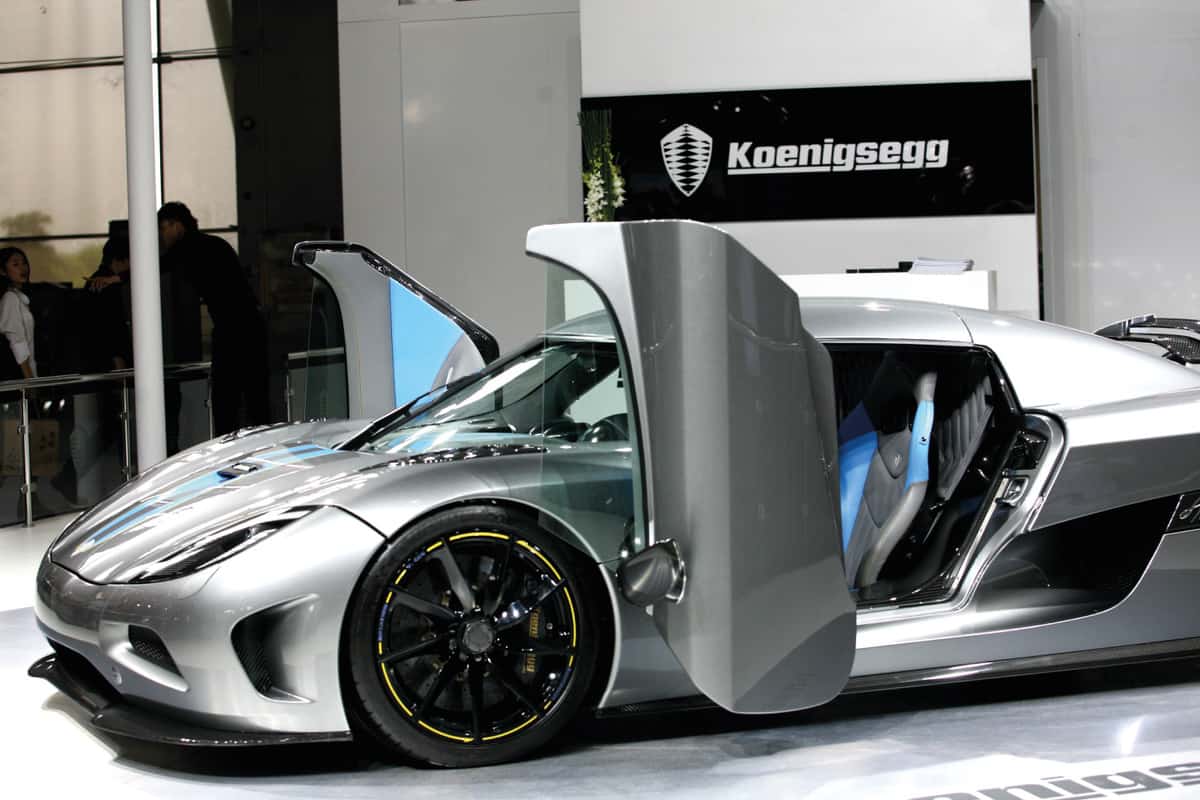 It opens by extending away from the body and rotates 90 degrees clockwise at the same time. It sits higher than most curbs, doesn’t require much clearance, and provides enough room to get in and out with adjacent vehicles. As a result, KATSAD avoids the inherent problems of other door styles while looking fantastic.

Since the door is patented, you can only find KATSAD on Koenigsegg models. The video below showcases the KATSAD design paired with Koenigsegg’s “Autoskin” system that automates everything using hydraulics:

As with some of the previous designs, KATSAD does not have any official crash test results from safety organizations. To their credit, Koenigsegg did release some crash test videos featuring their cars which are all made with carbon-fiber bodies, which adds some security.

Now you know the various materials and styles of car doors, as well as the high cost of some amazing but risky designs. No matter the type of door, all of them can be frozen shut in frigid weather, so check out our step-by-step guide on how to unfreeze car doors so you won't have to wait out in the cold.