The Pacifica is probably the best minivan that Chrysler sells to the US market. Pacificas have plenty of tech and safety features that make them ideal for a modern family. But how does the Pacifica do on interior space? It's tough to find out directly whether the minivan has space-saving features like stow-and-go seats. Fortunately, we've researched every detail of the Pacifica and have the answer for you here in this post.

The Chrysler Pacifica has Stow 'n Go seating for its back row.

That's the basics of the storage space and capability of the Chrysler Pacifica, but there is more you need to know. In the remainder of this post, we will discuss Pacifica's storage capacity functionality in depth. We will also compare the space to other minivans and trims from Chrysler. 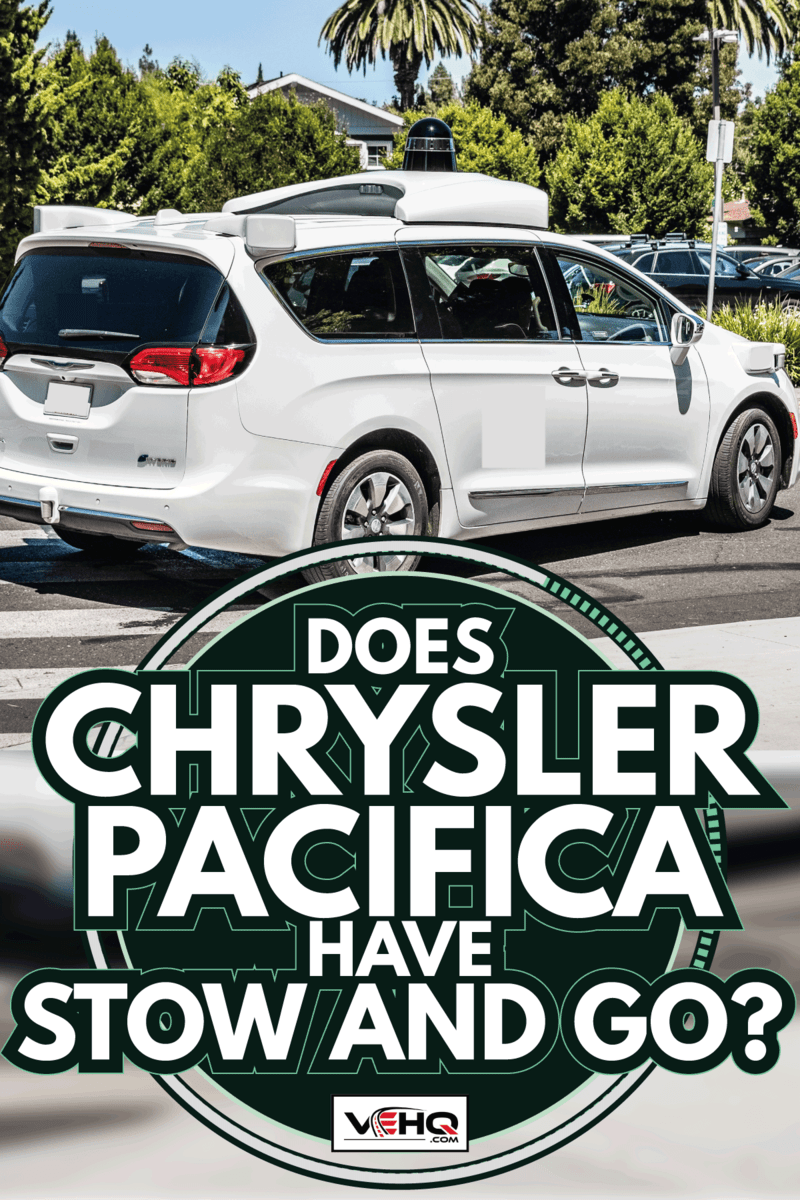 According to Pacifica's interior details page of the Chrysler website, the minivan comes standard with stow-and-go seats. What sets the Pacifica apart is that there are stow-and-go seats in both the second and third row of the van. This feature allows you to change your three-row minivan into essentially the same level of cargo capacity as a truck bed.

Another great feature of Pacifica's stow-and-go seating is added storage space. When the seats are in the upward position for passenger use, the floor compartments that they fold into are vacant. These compartments can be used as extra storage for small or medium-sized items. Regardless of which mode the seats are in, up or down, the Chrysler Pacifica is maximizing storage capabilities.

The fold-away seats that you find in the back of Chrysler Pacificas are a patented type of seating. This seating type is cleverly called Stow 'N Go seating. The feature functions smoothly and works with a combination of automated systems and manual adjustments. You'll have to fold the second row down yourself, but the third row goes down at the press of a button as long as you have adjusted small items like the headrests so that they will fit into the floor compartments.

If you are more of a visual person, here is a quick video demonstrating how the Stow 'N Go seats on the Chrysler Pacifica work:

There are four total trims of the 2021 Chrysler Pacifica: Touring, Touring L, Limited AWD, and Pinnacle AWD. The trims are all similar in terms of size, shape, and most features. Both the Touring and the Touring L are available in AWD or FWD, whereas the Limited and the Pinnacle are AWD exclusively.

All trims have the same engine; there is a slight fuel economy decrease for the AWD versions and trims. Between the Touring and the Touring L, the L adds several features. Among those additions are 17-inch wheels, exterior chrome accents, leather accents for the interior, and driver memory for seat and steering wheel position.

Pacifica Limited adds features like premium leather seats and hands-free liftgate and sliding doors. The highest trim of the Pacifica differentiates itself with even more premium features. You can check out a complete list of the differences here.

How much space is in the back of a Chrysler Pacifica?

We'll define the back of the Chrysler Pacifica as any space behind the two front seats. The back of the Pacifica is incredibly spacious whether you are using the stow-and-go seats or not. The Pacifica has a maximum cargo capacity of 140.5 cubic feet. That maximum cargo space is what's available when the seats are folded down into the "stowed" position.

Is Chrysler Pacifica a 7 Passenger Van?

Each of the four trims of the Chrysler Pacifica is a seven-passenger van. The seven-passenger seating is spread across three total rows. The first and second rows each have two captain's chairs, while the third row has a three-seat bench.

This seating layout is pretty standard in most minivans. Of course, if you desire to have fewer seats and more storage capacity, you can always use the stow-and-go functionality.

Can you Sleep in a Chrysler Pacifica?

Since the cargo area's floor in the back of the Pacifica isn't perfectly flat, you won't want to lay on it directly. Several plastic pieces stick up and would be uncomfortable for a night of sleeping. So, the best option would be to use either a sleeping pad or air mattress to make the space more comfortable.

There is enough space in the back to put two adult size sleeping bag pads side by side. Or, you could put a small twin or twin XL air mattress in the back of the Pacifica. There is plenty of room for either option. There is more discussion of the camping capabilities of the Chrysler Pacifica in the video above.

Do all Chrysler Minivans Have Stow and Go Seating?

First, the Chrysler Pacifica Hybrid is the environmentally friendly version of the standard Pacifica that Chrysler markets separately. Despite the different engine setup, the rest of the Hybrid is similar to the standard version. For example, the Pacifica Hybrid has standard stow-and-go seating, but only in the third row. While some of the Pacifica models we've covered have second-and third-row stow-and-go seats, the Hybrid does not. Second-row "Stow 'N Go" seats are available by an upgrade.

Next, the Chrysler Voyager is another minivan model from the lineup. The Chrysler Voyager is also a seven-passenger minivan with stow-and-go seating available for the second and third rows. It is the same Stow 'N Go-style pack away seats as the ones you can find on the Pacifica. They even have extra floor compartments that can be used when the seats are in the upward position.

Do any Other Minivans Besides Pacifica have Stow and Go Seating?

We now know that other Chrysler minivans other than the Pacifica have stow-and-go seating, but what about other minivans outside the Chrysler fleet? According to the Competitive Compare page of the Chrysler website, they are a cut above the competition.

Out of four minivans similar to the Chrysler Pacifica, it is the only model with both second and third-row stow-and-go seats. Competitors like the Kia Sedona, Toyota Sienna, and Honda Odyssey only have third-row fold-away seats.

The standard Stow 'N Go second, and third-row seating is hard to beat on this minivan. You can find stow-and-go seating on the Hybrid version of the Pacifica and its cousin, the Dodge Grand Caravan. But if a hybrid is more your style or if you prefer Dodge vehicles, you're in luck.

How Many Batteries Does A Chrysler Pacifica Have? [And How Do You Change Them?]

Does The Chrysler Voyager Have Stow ‘n Go Seats?