When it comes to minivans, there are many good options out there, each with their own positive qualities. As for seating options in those minivans, there are a few standard configurations that you are going to find. We’ll share with you what our research has found.

Most minivans you find today are going to feature seats for either seven or eight passengers, with the following seating configurations for each row:

These configurations are different depending on the brand and model of the minivan that you choose. Keep reading for all the details! 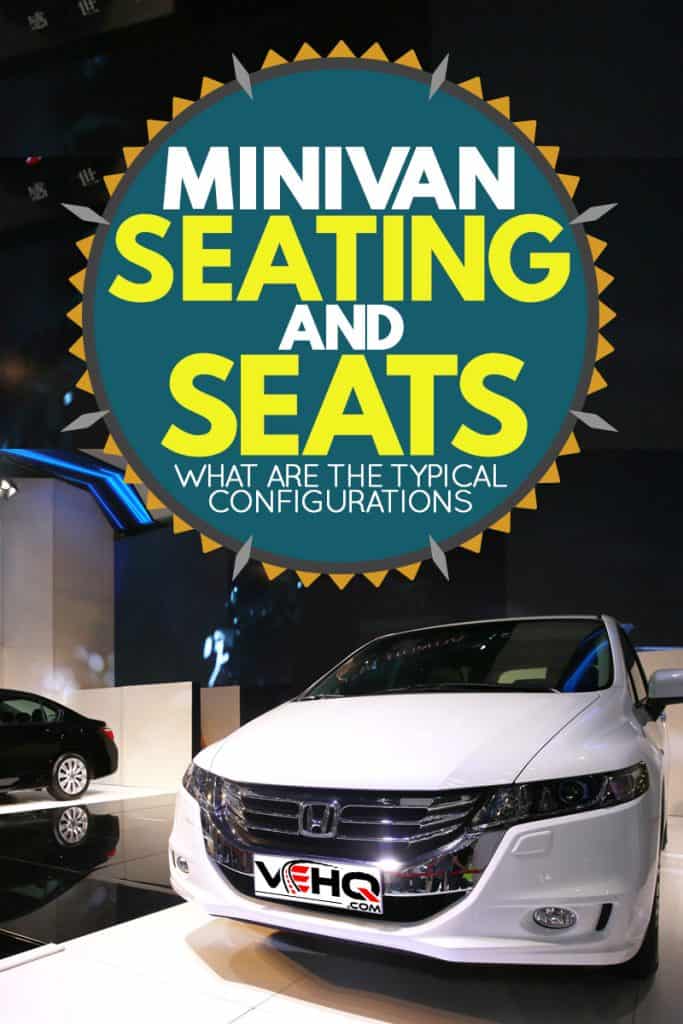 Seating Configurations of Common Minivans on the Market

The Kia Sedona has a capacity of eight passengers. It accomplishes this with two in the front, three second-row seats, and a split bench in the third row that seats three additional passengers. The outer two seats in the second row are captain seats, while the middle seat in the second row will fold down. The second-row seats will stand upright to allow more room, while the third-row seat will stow away. Find out more about the Sedona on Kia’s site.

This video shows a view of the Sedona’s interior layout:

The Sienna has room for eight. The second row is a 40/20/40 split, with a stowable center seat, while the third row consists of a split bench that can stow away to create cargo room. You can find more information about the Sienna on Toyota’s site.

You can also get an excellent feel for the interior in this video:

The Honda Odyssey joins the Sienna and Sedona with a capacity of eight passengers, except the base LX model, which only offers seven-passenger capacity. Second-row seating consists of two captain’s chairs, while a removable center seat will allow for a third occupant in that row on eight-passenger models. Third-row seating is a split-bench, which can fold into the floor to allow for more storage.  Find out more about the Odyssey at Honda’s site.

This video from Youtube gives a good view of the Odyssey seating:

The Chrysler Pacifica is an eight-passenger minivan. Chrysler’s site shows that both the second and third-row seats on the Pacifica are Stow ‘N Go, meaning they will fold into the floor, leaving you an utterly empty cargo area behind the front seats. That means any or all of the second and third-row seating can be stowed, giving a versatile range of storage configuration options. You can find out more about the Pacifica at Chrysler’s site.

This video shows the interior of the Pacifica, specifically how the Stow ‘N Go works:

The Metris is a little different than those discussed previously. While Mercedes does list it as an eight-passenger van, it accomplishes this through a bench seat in both the second and third rows, with no stowable seating. It also requires an optional second-row seat to get to that eight passengers, as the base only seats seven. The seven-passenger model has an offset, short bench that sits toward the driver side of the vehicle, which allows easy access to the third-row seats. On the eight-passenger model, you get an additional seat that fills the second-row bench out to become a sort of full-width split-bench. Find out more about Metris at the Mercedes vans site.

This video shows those bench seats on the Metris, with the optional eight-passenger configuration:

The Chrysler Voyager seats seven passengers. It does this with a pair of captain’s seats in the second row while seating three on a bench in the third row. The third-row bench is a 60/40 split, with each half able to stow independently. Both second-row seats, likewise, can be stowed away to create space to haul larger cargo. Find out more about Voyager at Chrysler’s site.

There is an excellent review, showing a close view of the interior, on Youtube:

The Ford Transit may often be seen in cargo configurations, but Ford also offers a passenger version of the Transit-Connect that seats seven.  This one is accomplished in a different way than many of the other minivans above. The Transit-Connect has a second row that features a split-bench, and a third row that contains a pair of bucket seats. All of the seats in the second and third rows fold down but do not store in the floor. Instead, when all the seats are folded, they create a level floor area that consists of the seatbacks. Find out more about Transit at Ford’s site.

You can see that here:

Dodge’s seven-passenger Grand Caravan arranges their seats like most of the other seven-passenger vehicles here. The base model comes with a removable bench in the second row, but there is an optional upgrade to a pair of captain’s seats in the second row, and the captain’s seats will fold into the floor. The third row contains a 60/40 split-bench that seats three. One unique thing about the Grand Caravan’s third-row seating is the ability to flip them to a position where they face the rear, allowing a ">tailgate seating position. Find out more about Grand Caravan at Dodge’s site.

You can get a good view of the Grand Caravan’s interior seating, and how to stow it, in this video:

As you can see, many of these share a similar layout and seating system, with a few variations. While over half seat eight, a sizeable amount only allow for seven passengers.

Can a Minivan Seat Eight?

The short answer to this question is yes. Several minivans listed above that seat eight. These include:

What Minivan Has the Most Seats?

When it comes to seating in minivans, several offer seating for eight. These include the Kia Sedona, Toyota Sienna, Honda Odyssey, Chrysler Pacifica, and Mercedes Metris.

Which Minivan Has Stow and Go Seating?

Stow ‘N Go is available on the Chrysler Pacifica, Chrysler Voyager, and Dodge Grand Caravan. Other brands offer similar ability to stow the seats away, such as the Toyota Sienna, while some others have seats that fold flat into the floor, but do not stow away.

We have explored this topic in more detail in this post.

Which is the Roomiest Minivan?

The minivan with the most space in this category is the Mercedes-Benz Metris, coming in at 186 cubic feet when in cargo configuration. If you are talking purely in passenger mode (allowing seats to be stowed, but not removed), then the Toyota Sienna is the top pick, with 150 cubic feet of storage.

As you can see, with the full range of minivans available to you, there are some clear standards on the seating configurations available. But within these typical layouts, various stowing and fold away seating options allow for a range of flexibility, allowing you to get the most out of whichever minivan you choose.

Which Minivans Have Stow-And-Go Seating?

What Makes A Minivan A Minivan?