The Chrysler Voyager has made its return to the minivan lineup and has been making some noise. It has plenty of room in the cabin, stow-and-go seats, and impressive performance. However, there may be times that issues arise, such as the windows not working. In that case, what could be the culprit, and what do you do if your Voyager's windows aren't working? We've researched potential issues and repair tactics to get the answer for you.

Below we have found five common reasons why your Chrysler Voyagers window won't roll up:

It can be quite frustrating when your vehicle's windows won't roll up. Unfortunately, vehicles are tricky, and it's hard to know exactly what could be causing the issue. In this article, we discuss these five common issues and how to troubleshoot them, so read on! 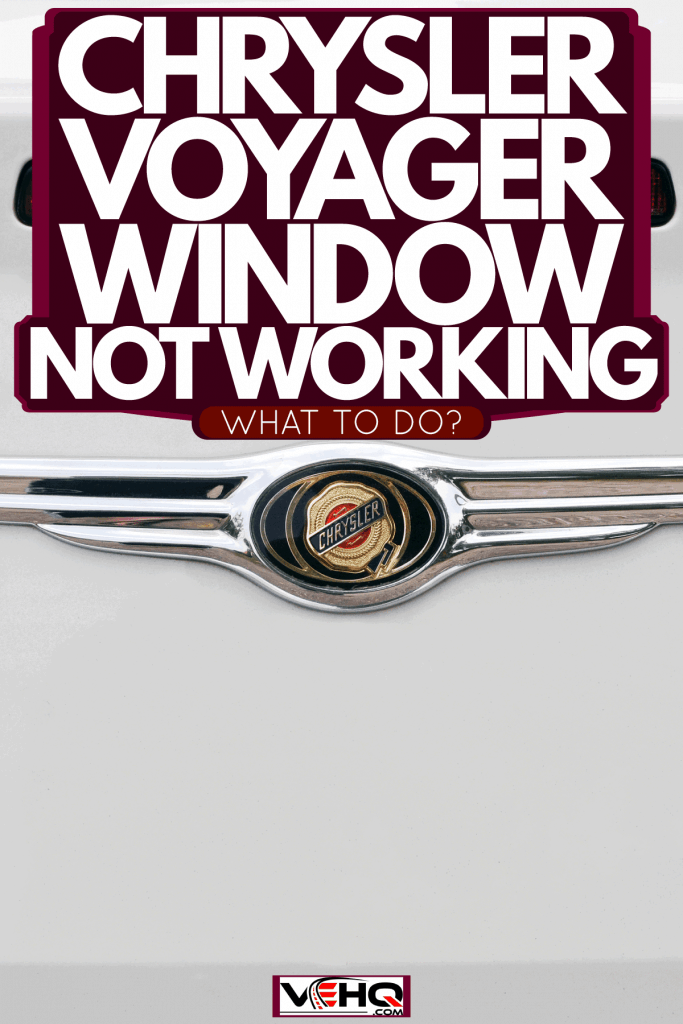 Chrysler Voyager Window Not Working - What To Do

When it comes to a vehicle's windows not rolling up, there are some common reasons. The hard part is knowing what the signs are and how to fix them then. Below we have listed out the five most common reasons and how to try and repair them.

A broken window regulator could be the reason why your Chrysler Voyager's window won't roll up. A common sign of this would be when the window doesn't go up or down. It could also make a grinding sound as it rolls up. If it continues not to work, then you may need to replace the motor or regulator.

To test if your regulator is broken, follow these steps:

One of the most common issues with Chrysler Voyagers is a blown a fuse. It may not be obvious why this happened, and you likely won't know when it had blown. The most common reason why a fuse blows is due to overloading or an electrical short somewhere. It's also possible that you may have left the windows down and it rained which resulted in water causing an electrical issue.

To find the blown fuse, you need to pull out your fuses box located under your vehicle's hood. In addition, there should be a diagram on the inside door that you can reference to help find which one is for the power windows. Once located, pull out the fuse and check it using a multimeter.

This gadget is an electrical tester that measures voltage, resistance, and current. Click here to see a multimeter on Amazon.

To do this, connect your positive lead to one end of the fuse and the negative lead to the other. If the needle does not move then, you have found your blown a fuse. If it does move, there is another issue going on, which means further investigation needs to be done.

Doing a quick check on your wiring harness will help determine if your wiring is corroded. Corroded wiring can cause a fuse to blow or a short circuit that may not allow the window to roll up.

This should be done by taking your multimeter and testing it using the steps listed above. If it doesn't move, you have found an issue with your wiring harness, which needs to be reattached or replaced.

If you find that the windowpane is off track, it's likely due to a broken clip. These clips are placed on the left and right sides of the windowpane, which holds them within the track.

You will need to remove the windowpane by sliding it forwards. Once off, take a look at where your clips should be placed.

If they are broken or missing, you can order replacements that you should do before reinstalling the glass. The clips should not only hold the pane in place but also keep them from rattling.

Something is Stuck Between the Window and Door Frame

If something has managed to get stuck between the window and door frame, it may be causing your window regulator not to work. The first step would be to remove anything you see. You can do this by using a flat-head screwdriver and pushing against the object until it pops out.

If you don't see anything on the track, take a look at the window regulator. The metal tracks are typically where things get stuck and become difficult to remove without professional help.

If all else fails, you may need to replace your window regulator if you can't find what is causing this issue.

How to replace the window motor on Chrysler Voyager

Follow these steps to help you replace your Voyagers window motor yourself:

If you find that you are in over your head during this process, it never hurts to contact a professional. It may be more expensive, but it will save you a lot of time and headache. Here's a video showing window motor repair:

Is it expensive to replace the window motor?

The average time to replace a power window motor is 2.1 hours, which costs roughly $120-$150 in labor plus the cost of the part itself: anywhere from $200-$300 total depending on make and model.

But many factors can affect how long it will take for your mechanic—some models have higher or lower rates than others (e.g., 4+ hour types). Also, the price you pay varies by about $100 because some places charge more/less based on difficulty levels involved with certain car parts.

Does Chrysler Voyager have a power liftgate?

If your hands are full, then a power liftgate is a handy feature! The 2020 Chrysler Voyager has the technology your family needs to have a comfortable and enjoyable ride.

Optional on the L trim is tri-zone manual climate control, while optional on the LX trim is a power liftgate with a second-row DVD player for backseat passengers entertainment in eco mode.

Does Chrysler Voyager have power doors?

All of the power controls within this minivan are manual. This includes getting in and out of the vehicle, closing your sliding door or hatch, using the rearview mirror controls (for adding on a remote rearview camera system), and controlling your windows. However, the LX trim does have an optional power liftgate which can be quite handy!

How to engage child lock on Chrysler Voyager?

Do you have a child that likes to play with the power windows and doors? You can engage the child lock on your Chrysler Voyager by following these steps:

A number of issues can lead to window malfunctions. First, the window motor may be faulty or damaged from a previous accident and need replacement. Second, the power windows could have been accidentally activated with too much pressure while in motion which wears out the gears over time. Whatever is causing the issue may be best to be handle by a certified mechanic.

Want more information on other vehicle makes and models? Check out these:

What Makes A Minivan A Minivan?

We would love to hear from you, so leave us a comment below!