Ford Mustang has been among the pioneers in the American muscle car category. It is one of Ford's best-selling vehicles and its origin dates to 1964. A V8 engine choice has been considered an industry standard when marketing it under an American muscle car tag. Ford is marketing a new EcoBoost engine configuration that is more practical because the Ecoboost combines fuel economy and strong performance. However, many consumers are wondering if the Ford Mustang EcoBoost has a turbo?

The Ford Mustang EcoBoost has a 2.3L inline 4-cylinder turbocharged engine that provides the best gas mileage out of the other engine options and still provides enough punch and low-end torque to keep the fun-to-drive factor up. Ford recommends its customers to use premium gas for the best gas mileage and performance.

The Eco-boost engine has a much smaller carbon footprint as it emits almost 20% less carbon dioxide when compared to a normal 4-cylinder petrol engine. It complies with the newer European stage 5 regulations. If the EcoBoost engine intrigues you, read on as we discuss the benefits of having a Ford Mustang with an EcoBoost engine. 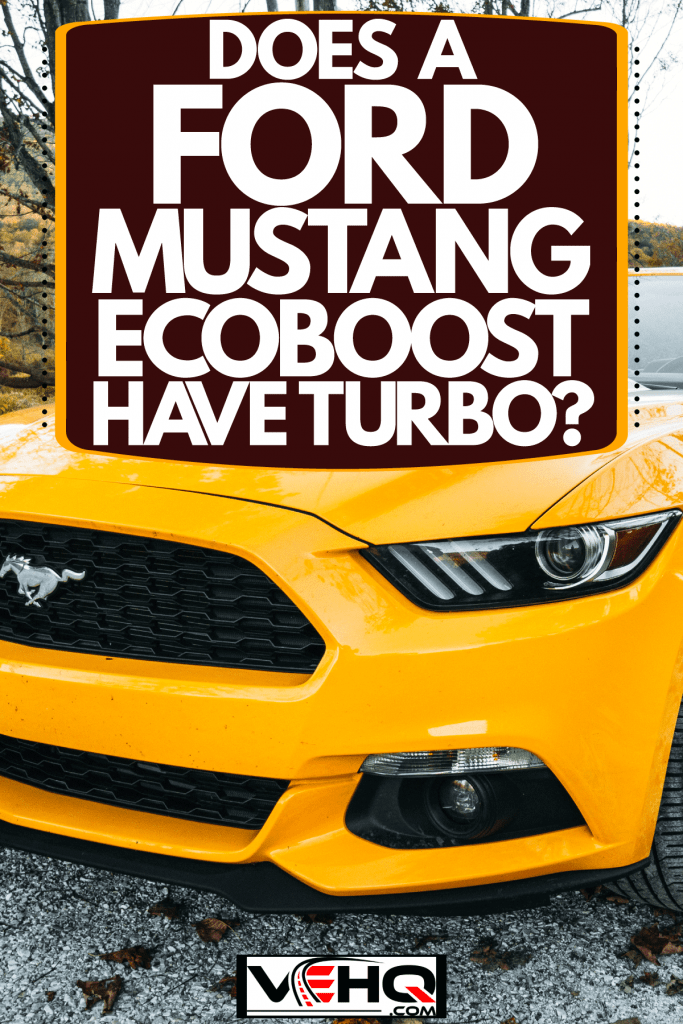 Does The Ford Mustang Ecoboost Have A Turbo?

The Ford Mustang Ecoboost manages to provide a good amount of power while keeping the engine's displacement down to 2.3 liters. It also offers a lot of space to work in the engine bay as the same engine bay is designed to house the V8 engine.

Ford Mustang EcoBoost is equipped with a turbocharger that helps it reach the marketed efficiency and performance. The turbocharger equipped in the Mustang is optimized to have little to no turbo lag to provide low-end torque.

Turbo lag is the delay it takes for the power to be sent down the wheel after pressing down the pedal due to the time required by the turbo to spool up. Ford uses a turbocharger with low inertia impeller blades that help it spool up earlier in the rpm range. This allows the Mustang to have its peak torque at 3000 rpm and the peak power at 5500rpm and maintains it well over to the redline.

The new 10-speed automatic gearbox helps it remain the powerband throughout the speed range and gives it three overdrive gears that ensure you get good highway gas mileage. The automatic transmission does a great job of shifting, and it would be very tough for a regular driver to drive any faster by opting for the manual tranny. The automatic is a much practical option to move around in the city traffic and is just done very well. 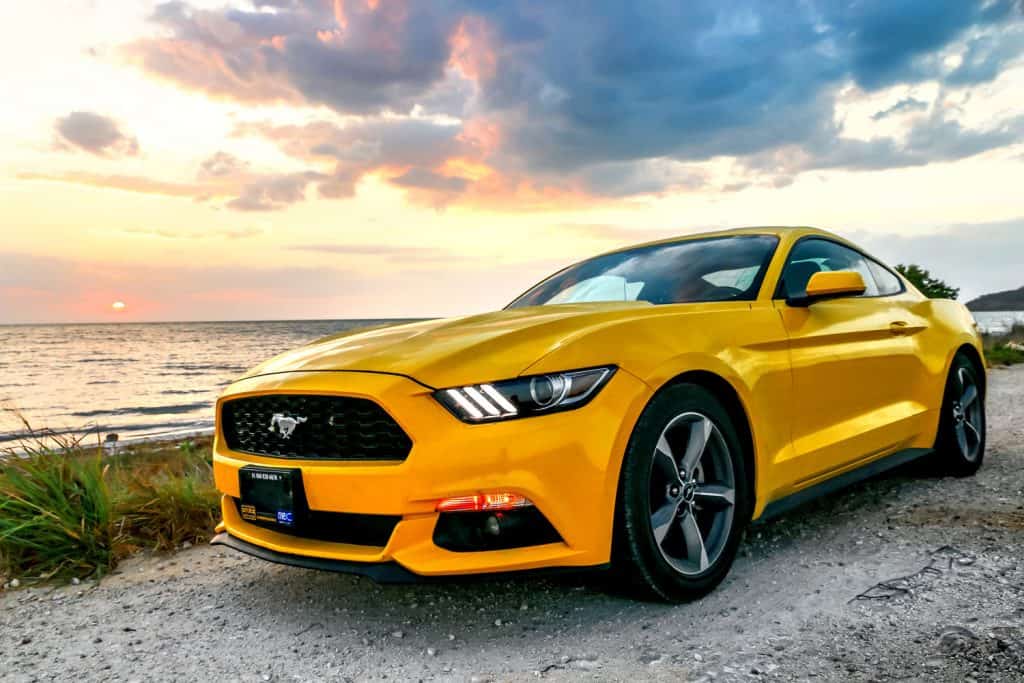 Will An EcoBoost Engine Last?

The smaller 4-cylinder Ecoboost engine withstands higher stresses when compared to a naturally aspirated engine. Ford has used direct injection to ensure a higher compression ratio, leading to higher engine stresses to bump up the power figures. But this is not Ford's first time putting forward a turbocharged direct-injection engine.

Ford engineers designed the engine to handle all those generated stresses well within certain safety factors. In addition, it has passed the general test of time by its customers, who do not seem to face any problems even after reaching the 100,000-mile mark. Regular maintenance will help increase the engine's lifespan.

A Mustang EcoBoost can drive on regular gas but slow down the engine valve timings to adjust for the lower octane number.

The engine does not take any damage at all when driven on regular fuel but loses a few ponies (35 hp) which accounts for about 11% percent power drop, and the gas mileage also takes a 2-4 miles per gallon hit. So, the benefit of using regular fuel on your mustang EcoBoost is relatively narrow.

Does The Mustang Need Premium Gas?

Ford's power and torque figures are with the 93 RON premium gas, and Ford recommends its customers to use the premium gas for the best gas mileage and performance. Of course, you can also use the regular 87 RON fuel, but it will cut down the power to 275 hp and the torque to 300 lb.-ft as the engine slows down the valve timings to cater to the low octane fuel to avoid any engine knocking that can harm the engine.

The use of regular fuel will also knock down your 3 to 4 miles per gallon off your fuel mileage. So, you do not save much by opting for regular fuel, but it will not harm your engine in any noticeable way.

What Gas Do You Put In A V6 Mustang?

For a stock naturally-aspirated V6 Mustang, you will be perfectly fine with the regular 87 RON fuel. However, you will not feel any noticeable power or torque gains or any bump in fuel mileage by opting for the costlier premium fuel for the standard NA V6; hence it is not advised.

It is recommended to check with your local dealership or the owner's manual for the correct gas to put in your V6 Mustang. Nonetheless, choosing the right gas can be speculative and depends on a person's perspective. 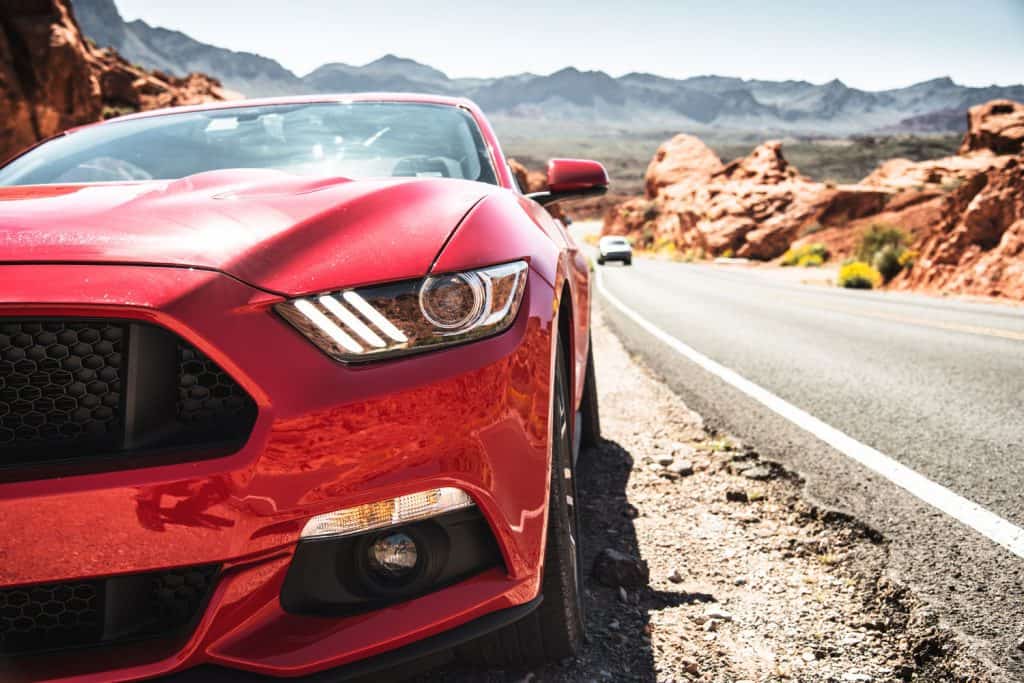 How Does EcoBoost Turbo Work?

Ecoboost turbo in the inline-four configurations mainly targets the low rpm range to provide enough punch on the lower end and avoid turbo lag. Ford has designed the turbo in the Mustang with low inertia impeller blades that spool up to the desired rpm quickly.

Reluctantly the car can reach its peak torque at just 3000 RPMs, with peak power at around 5500 RPMs. Moreover, it does so with almost little to no turbo lag. The rush of power delivery is quite linear and natural up to 5500 rpm and straights out over that up to the redline.

What Is The Ford Mustang EcoBoost High-Performance Package?

The Mustang EcoBoost high-performance Package adds about five grand to the car's total price by offering some noticeable gains in the performance of the 4-cylinder EcoBoost engine. It increases the power to 332 hp and the torque to 350 lb.-ft. It also includes some handling upgrades from the GT trim of the Mustang. The high-performance package adds: 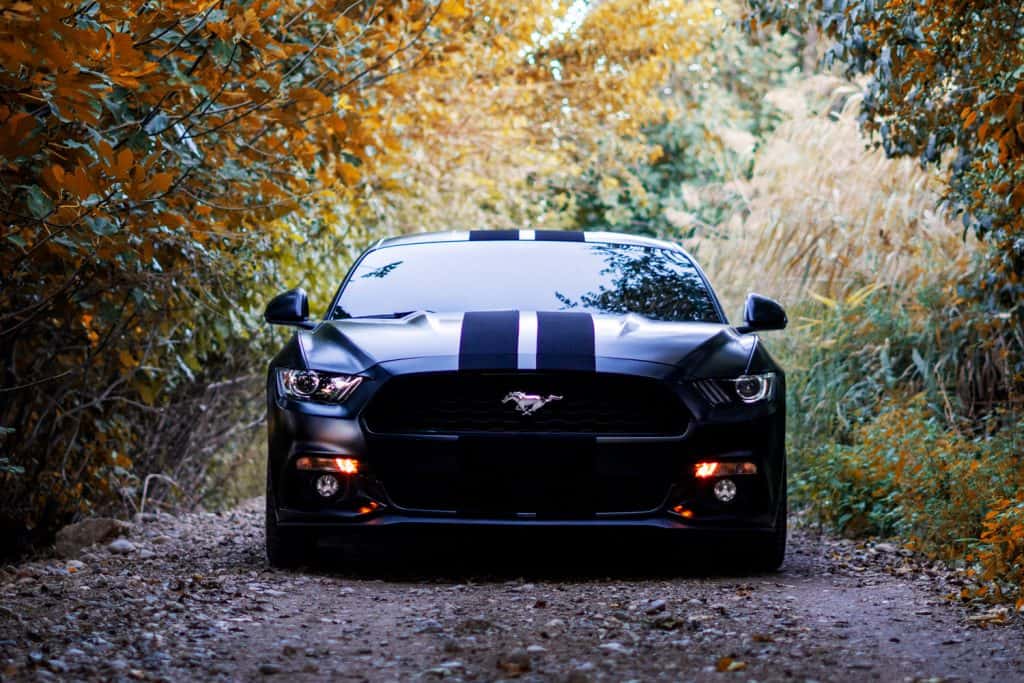 How much is the Ford Mustang High-Performance Package?

With the addition of the high-performance package in the Mustang, Ford claims the Mustang Ecoboost has a 0 to 60 time in about 4.5 seconds. The package manages to pack 20 more horsepower along with some track handling upgrades and some visual modifications.

Is The High-Performance Package Worth It For A Ford Mustang With EcoBoost?

If the new body style of the Ford Mustang has you intrigued, but you are looking for a more fuel-efficient style, then the Mustang equipped with an EcoBoost is worth a test drive. It still has great low-range power for adrenaline junkies but doesn't burn through fuel as the naturally aspirated V8 does. If the Ford Mustang is at the top of your list, it is worth test driving the different engine models to see what works for you.

Have any questions about this article? Please, leave us a comment below!